Screening Machines May Need to Be Replaced; Al Qaeda Aware of 'Achilles heel'

Officials now say tragedy was only averted on Northwest flight 253 because a makeshift detonator failed to work properly.

Bomb experts say there was more than enough explosive to bring down the Northwest jet, which had nearly 300 people aboard, had the detonator not failed, and the nation's outdated airport screening machines may need to be upgraded.

"We've known for a long time that this is possible," said Richard Clarke, former counterterrorism czar and ABC News consultant, "and that we really have to replace our scanning devices with more modern systems."

Clarke said full body scans were needed, "but they're expensive and they're intrusive. They invade people's privacy."

In 2001, would-be "shoe bomber" Richard Reid failed in his attempt to blow up a transatlantic flight with a highly explosive chemical known as PETN. He attempted to light a fuse to his shoe on a December 22 American Airlines flight from Paris to Miami but was subdued by other passengers.

According to investigators, the bomb on Northwest flight 253, which was en route from Amsterdam to Detroit when suspect Umar farouk Abdulmutallab allegedly detonated it, contained more than 80 grams of PETN. The material was allegedly sewn into Abdulmutallab's underwear, and was not detected by airport security.

The bomb was built and the plot organized, say U.S. officials, by al Qaeda leaders in Yemen, just north of the capital city of Sanaa. 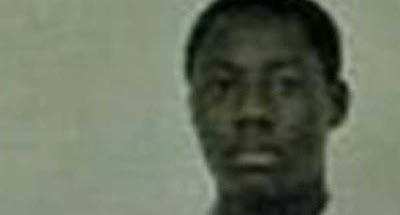 Sahara Reporters, a Nigerian news source, is reporting that this photo is of terror suspect Umar Farouk Abdul Mutallab while he was at at the British School of Lome, Togo, a prestigious school. (www.saharareporters.com)

Investigators believe Abdulmutallab was connected to al Qaeda by the same radical imam, American-born Anwar Awlaki, who is linked to the American Army major accused of opening fire at Fort Hood in November.

According to investigators, the bomb used yesterday was built in Yemen by a top al Qaeda bomb maker.

Northwest Airlines flight 253 -- operated on a Delta airplane - was getting ready to land in Detroit just before noon Friday when "a passenger caused a disturbance," said Delta spokeswoman Susan Chana Elliott. The man, later identified as Abdulmutallab, was trying to ignite when was initially reported as firecrackers.

According to the criminal complaint filed against Abudlmutallab, he boarded KLM Flight 588 from Lagos, Nigeria and transferred to Northwest Flight 253 at Schiphol Airport in Amsterdam.

Prior to the incident, Abdulmutallab went to the bathroom for about 20 minutes. Upon returning to his seat, Abdulmutallab said he had an upset stomach, and pulled a blanket over himself.

Passengers then heard popping noises similar to firecrackers and smelled an odor. Some saw Abdulmutallab's pants leg and the wall of the airplane on fire. Passengers and crew then subdued Abdulmutallab and used blankets and fire extinguishers to put out the flames.

A passenger apparently saw the suspect holding what a partially melted and smoking syringe. The passenger took the syringe, shook it to stop it from smoking and threw it to the floor. Dutch filmmaker Jasper Schuringa has been identified in the media as a passenger who subdued Mutallab.

Abdulmutallab, who flew from Nigeria to Amsterdam and then Detroit, was taken into custody at the Detroit airport and was interviewed by authorities there. He was then taken to an area hospital to be treated for burns.

Abdulmutallab was on a terrorism watch list, but not on a no-fly list. Said Clarke, "So once again, we have the U.S. government, as in the case of the Fort Hood attacks, knowing about someone, knowing that they were suspicious, but that information didn't get to the right people in time."

World is left to wonder how man was allowed in U.S.

Umar Farouk Abdulmutallab's 20-minute trip to the bathroom Friday was the first hint to passengers that Northwest Airlines Flight 253 was going to have an unexpected and terrifying conclusion.

He came back to seat 19A on the flight from Amsterdam, Netherlands, to Detroit just minutes before landing, complaining of a stomachache and asking for a blanket.

What no one knew at the time was the 23-year-old Nigerian had an explosive strapped to his body.

Suddenly, passengers heard a loud pop. Abdulmutallab had tried to detonate the device, filled with PETN -- also known as the highly explosive pentaerythritol -- and triggered flames and smoke, setting his pants and the airplane wall ablaze, federal agents say. 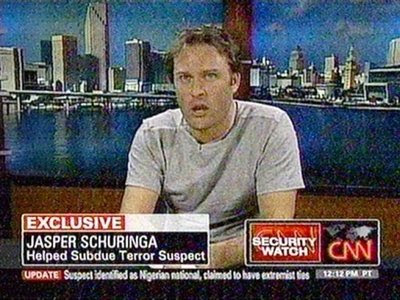 Schuringa, other passengers and the flight crew were able to subdue Abdulmutallab, believed to be the son of a prominent Nigerian banker, extinguish the fire and turn the terrorism suspect over to federal authorities before the attempt turned into a tragedy over the skies of Detroit.

Abdulmutallab, who has told federal authorities he was acting on orders from Al Qaeda, was arraigned Saturday at the University of Michigan Trauma Burn Center on charges of trying to destroy an aircraft and place a destructive device on an aircraft, which carry a prison sentence of up to 20 years and a fine of $250,000.

The flight carried 279 passengers from all over the world, traveling home for the holidays, visiting friends abroad and trying as hard as they could to catch connecting flights once the Airbus 330 touched down at Detroit Metro Airport about noon.

As federal authorities dissect what they're calling a terrorist attack, the rest of the world is left wondering how Abdulmutallab got into the country in the first place.

And how, in light of 9/11 and other attempted and successful terrorist attacks, he got an explosive device on a flight.

Abdulmutallab has been known to federal authorities for at least two years and had been on a terror watch list compiled by the U.S. National Counterterrorism Center.

His father had gone to the U.S. Embassy in Nigeria in November to express concerns about his son's connection to both Al Qaeda and Yemen, a country connected to terrorist breeding.

But he didn't have specific information that would have put his son on a no-fly list, which would have prohibited him from getting on the flight.

The connections between Abdulmutallab and Al Qaeda are becoming more apparent, though, according to U.S. Rep. Pete Hoekstra, a Holland Republican and ranking member of the House Intelligence Committee who talked with Deputy National Security Adviser John Brennan on Friday.

"There are strong indications that he was in Yemen for a period of time," Hoekstra said Saturday. "And this guy had a little more coordination because he had to get his hands on this device."

"There's a rather significant connection," he said. "But thank goodness Al Qaeda is still somewhat sloppy."

As for the device, it was made of plastic, which wouldn't be detected by airport metal detectors, and passengers saw Abdulmutallab holding a smoking syringe that also was used in trying to detonate the device.

"I don't know how close we came to really having a disaster in Detroit," Hoekstra said. "Were we one inch away from it or was this device never going to work in the first place? That's pretty scary."

Officials in the Netherlands said an initial investigation showed routine security procedures were followed at Schiphol Airport in Amsterdam with no irregularities. Abdulmutallab's name was on the passenger manifesto that was forwarded and approved by U.S. authorities before takeoff.

Experts doubted that Abdulmutallab's intended target was Detroit, but rather causing an explosion over any heavily populated U.S. city.

"He was just willing to catch any airliner that would take him anywhere in the United States, whether it's New York or Los Angeles or Detroit," said Gregory D. Lee, a criminal justice consultant in Pebble Beach, Calif., and retired Drug Enforcement Administration agent involved in the arrest of terrorist Ramzi Yousef, the mastermind on the 1993 attack on the World Trade Center.

"And he waited until the final approach, trying to make sure the plane crashed in a heavily populated area."

Naomi R. Patton and the Associated Press contributed to this report.
Posted by jtf at 11:51 AM