The international Religious Left is grieving over the Copenhagen climate summit’s failure to mandate sweeping restrictions on capitalism and massive global redistribution of wealth.
“With a lack of transparency, the agreement reached this past week by some countries was negotiated without consensus but rather in secret among the powerful nations of the world,” bewailed the World Council of Churches’s climate change spokesman. He further denounced the summit as a “strong strike against multilateralism and the democratic principles in the U.N. system.”

Hopes among the numerous religious activists in Copenhagen had been feverishly high. Global Warming alarmism combines so many of the Religious Left’s favored fetishes, hopes and fears: hostility to free markets and economic growth; cravings for wealth redistribution; Western guilt; veneration for the earth at the expense of humanity; and aspirations for global governance. 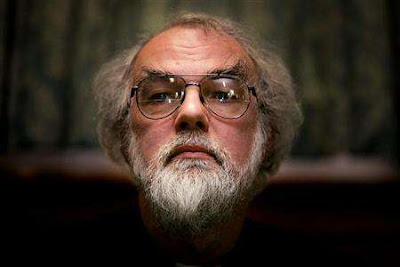 Most prominent among the religious prelates in Copenhagen were Archbishop of Canterbury Rowan Williams (pictured at left) and retired South African Archbishop Desmond Tutu, who solemnly told religious activists at a rally that an unidentified 300,000 people were “dying as a result of the poverty caused by all of the emissions coming from the rich countries.” Lest anyone misunderstand his target, Tutu pleaded: “Hello, rich people. Hello there, hello America.” Tutu did not mention how many hundreds of millions of people are alive and living with greater health and wealth because of Western industry.

“If you are responsible for most of the emissions, which are—look—look—look at the ozone layer. People are now suffering from all kinds of skin diseases, because we are thinning the ozone layer. Whoa! Whoa-ho!”

Getting more straight to the point, Tutu importuned the wealthy West to fork it over:

At an ecumenical church service attended by Denmark’s queen that was somewhat more decorous than the street rallies, Rowan Williams intoned: “We cannot show the right kind of love for our fellow humans unless we also work at keeping the Earth as a place that is a secure home for all people.” The Lutheran cathedral was adorned with a massive banner demanding: “Time for Climate Justice.”

As my colleague Jeff Walton reported, Williams apocalyptically sermonized against “a world of utterly chaotic and disruptive change, of devastation and desertification, of biological impoverishment and degradation.” He waned of a “downward spiral of the greedy, addictive, loveless behavior,” and worried that “we have not yet been able to embrace the cost of the decisions we know we must make. We are afraid because we don’t know how we can survive without the comforts of our existing lifestyle.”

Claiming that the Global South is poor because the West is rich is the constant refrain of the Religious Left, which rehashes the theme from the secular left and adorns it with sanctimonious guilt. “How shall we build international institutions that make sure the resources get where they are needed – that, for example, ‘green taxes’ will deliver more security for the disadvantaged, that transitions in economic patterns will not weigh most heavily on those least equipped to cope?” Williams asked. Naturally, the prospect of international “green taxes” excites the Religious Left almost to a quiver.

Much of the Religious Left inclines to at least a soft pantheism that venerates Mother Earth and bewails the traditional Christian and Jewish understanding that God created the world for the benefit of humanity. “We have a bad habit, a belief in a theology of dominance that humans rule over the earth,” averred Canadian church official Joy Kennedy, a climate change activist with the World Council of Churches (WCC). “Well, I have to tell you, sisters and brothers, it is past time that we confess that.”

Summoning sinners to the mourners’ bench, Kennedy continued her jeremiad.

“And if we believe the planet is just a natural resource bank, there to be exploited, excavated, extracted, dumped on, then we will treat it that way. But if we believe we are part of a sacred creation dependent on its gifts for our very survival and for life, then human activity requires responsibility and we will act differently because we love and serve and protect our home.”

She implored that “we need to find ways to replace greed with an economy of enough.”

Urging people of faith to deny themselves and live abstemiously would be laudable. But the WCC and other Religious Left climate activists are not so much interested in voluntary Christian asceticism as they are mammoth and coercive international regulation that would forcibly repress economic growth in the West while transferring enormous wealth to Third World kleptocratic elites. Meanwhile, the Third World’s poor would suffer further while forever deprived of Western style access to carbon-producing luxuries like electricity, lest they too become guilty of carbon sins and “dominance” over the Earth.

In a formal appeal to the Copenhagen summit, the WCC pleaded for “worldwide actions to save our planet from the catastrophic and suicidal consequences of climate change.” The WCC pleaded for a “global agreement” on carbon emissions that would supposedly transform the world. “Do not deceive us,” they warned. “It will be a sign of hope for the future, and it will bring peace on earth to people of good will, today and for the years to come. We are all members of one family living together, breathing together, and dreaming together.”

So naturally, the WCC and other Religious Left activists in Copenhagen were devastated when the summit yawningly agreed to unspecified carbon reductions and not the shut-down of global capitalism for which the WCC had been praying. Specifically, the WCC had wanted a draconian 40 percent reduction of carbon emissions by 2020. “Copenhagen was a missed opportunity by the industrialized countries to lead by example” tut-tutted one WCC climate advocate. “Most of the industrialized countries didn’t show the needed commitment to lead the whole world in an effective way to address the challenges of climate change.”

Another WCC official promised that the “struggle continues” even though the WCC and the “whole civil society” had been “betrayed” by Copenhagen’s failures. “We need to build on the incredible mobilization by churches and the civil society over the next year, with prayers, bell ringing, and advocacy action, to reach a fair, ambitious and binding deal in Copenhagen which was not achieved because of the unwillingness of most of industrialized countries.”

The Religious Left can go on ringing the bells of its mostly empty churches. But no amount of religious noise pollution is likely to persuade most of the world to shut down its industries and quietly accede to perpetual poverty while relinquishing humanity’s “dominance” over a liberated Earth.
Posted by jtf at 9:08 AM