The folly of a "right to health care"

There Ain’t No Such Thing As a Free Lumpectomy 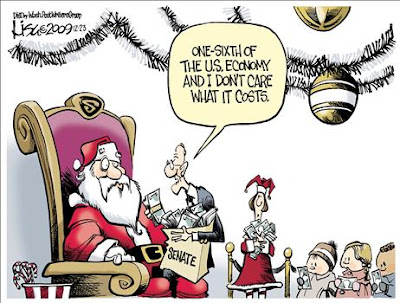 This week Senate Majority Leader Harry Reid declared that his chamber’s health care bill “demands for the first time in American history that good health will not depend on great wealth.” Reid said the legislation “acknowledges, finally, that health care is a fundamental right—a human right—and not just a privilege for the most fortunate.”

Since more than four-fifths of Americans already have medical insurance, and even those without “great wealth” have been known to enjoy “good health,” Reid was laying it on a little thick. But his premise, which is shared by President Obama, explains the moral urgency felt by supporters of the health care overhaul that is making its way through Congress. It also reveals a radical assault on the traditional American understanding of rights.

The Framers believed the Constitution recognized pre-existing rights, protecting them from violation by the government. The common law likewise developed as a way of protecting people from wrongful interference by their neighbors. If people have rights simply by virtue of being human, those rights can be violated (by theft or murder, for example) even in the absence of government.

By contrast, notwithstanding Reid’s claim that government-subsidized health care is a fundamental human right, it does not make much sense to say that it exists in a country too poor to afford such subsidies or at a time before modern medicine, let alone in the state of nature. Did Paleolithic hunter-gatherers have a right to the “affordable, comprehensive and high-quality medical care” that the Congressional Progressive Caucus says is a right of “every person”? If so, who was violating that right?

During his second presidential debate with Republican nominee John McCain, Obama said health care “should be a right for every American.” Why? “There's something fundamentally wrong,” he said, “in a country as wealthy as ours, for us to have people who are going bankrupt because they can't pay their medical bills.”

While liberty rights such as freedom of speech or freedom of contract require others to refrain from acting in certain ways, “welfare rights” such as the purported entitlement to health care (or to food, clothing, or shelter) require others to perform certain actions. They represent a legally enforceable claim on other people’s resources. Taxpayers must cover the cost of subsidies; insurers and medical professionals must provide their services on terms dictated by the government.

If health care is a fundamental right, equality under the law would seem to require that everyone have the same level of care, regardless of their resources. That principle was illustrated by the case of Debbie Hirst, a British woman with metastasized breast cancer who in 2007 was denied access to a commonly used drug on the grounds that it was too expensive.

When Hirst decided to raise money to pay for the drug on her own, she was told that doing so would make her ineligible for further treatment by the National Health Service. According to The New York Times, “Officials said that allowing Mrs. Hirst and others like her to pay for extra drugs to supplement government care would violate the philosophy of the health service by giving richer patients an unfair advantage over poorer ones.” The right to health care is so important, it seems, that it can nullify itself.

Jacob Sullum is a senior editor at Reason and a nationally syndicated columnist.
© Copyright 2009 by Creators Syndicate Inc.