This year, many Americans may not be able to have as bountiful a Christmas as they would like. But I know from my family’s journey to prosperity in America that just having your family together and food on the table in this land of liberty is something to be grateful for. As I sit down with my family for Christmas dinner this year, we will give thanks for that as we remember the dark Christmas and uncertain future my grandmother and mother faced at the end of World War II.

In late 1944 my mother was a teenager living in Breslau, the capital of Silesia in eastern Germany. She had already experienced the trauma of five years of unrelenting war .My grandparents were viewed with suspicion by the authorities because they had a Jewish-sounding name and had refused to join the Nazi Party. My mother had friends and colleagues killed in bombing raids, including a direct hit on the opera house in another city where she had been working as a ballerina. She feared the constant bombings and had quit performing only the month before to return to Breslau to be with her mother and sisters. 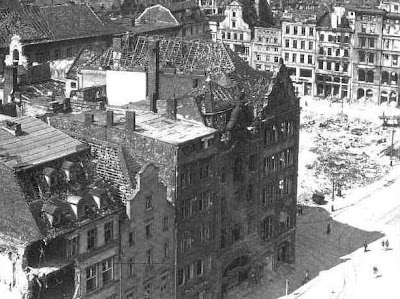 As Christmas approached, my mother had no idea whether her father was even alive. Although he was fortunately too old to have been drafted into the Germany army, he had been conscripted into a civilian corps that dug people out of bombed buildings in other cities. There was no longer regular mail or telephone service between Breslau and other cities in Germany, and he had been out of contact for quite some time.

Christmas was a depressing time. There was no tree, no gifts, almost no food, and my mother was overwhelmed with concern over her father and her family’s uncertain future. She remembers it as one of the worst times she ever experienced. And in a city whose civilian population was slowly starving to death as the Russian troops advanced, the Nazis wouldn’t let the civilians leave.

Shortly after Christmas, as my mother came home from her forced job in a factory, her mother told her that all civilians had been ordered out of Breslau. It was one of the bitterest and coldest winters on record. The temperature was only five degrees, and the streets were covered in snow and ice. But my grandmother gathered her elderly parents and her children and tried to get to the train station.

The station and all the streets leading up to it were mobbed. Panic set in as the crowds tried to desperately get onto the last trains leaving Breslau -- trains already packed with refugees from other cities and towns further east. To my grandmother’s consternation, she couldn’t even get close to the main station. It was just as well; the crowd panicked when it became clear there weren’t enough trains to evacuate everyone, and 60 to 70 children were crushed to death.

My grandmother feared what would happen when the Russians arrived (with good reason, as anyone knows of the mass rape, murder and pillaging committed by Russian troops wherever they went). My grandmother was extremely upset that she had been unable to get her family onto a train. Their future seemed even darker than it had at Christmas, and the empty, hungry holiday seemed even more forlorn.

Staying in the city was not the worst thing that could have happened, however, even as the Russian army approached. Many other families who could not evacuate by train tried to walk out of Breslau in the frigid January weather. My grandmother did not because her parents were too frail. Later that spring when the weather thawed, 90,000 corpses of men, women and children who had frozen to death were found in ditches along the roads leading out of Breslau.

Those on the trains weren’t much luckier. Many were evacuated to Dresden, where on Feb. 13, 1945, less than a month later, the city was bombed by British and American planes with incendiaries, starting a firestorm. Thousands of the refugees from Breslau were among the more than 50,000 people killed.

My mother and her family and 140,000 other desperate civilians remained trapped in Breslau during the Russian siege that started in February. The city finally surrendered on May 6, 1945, a week after Hitler committed suicide and four days after Berlin had fallen.

Two thirds of the city was destroyed and 10,000 civilians were killed in the house-to-house fighting. At one point, the children in the city, including my mother and her younger sister, were forced to dig trenches on the outskirts of the city under Russian artillery fire. My mother was even arrested by the Gestapo while she was trying to find her grandparents. Her crime? Being in a part of the city where civilians were prohibited. But she survived and escaped, as did her sisters, and one of the major reasons was because of my grandmother.

Oma was one of the most resourceful and optimistic women I have ever known. She never gave up hope, no matter how desperate the circumstances she found herself in. One of my aunts once told me that when she thought of my grandmother, she always saw her as she had seen her during the war – pacing back and forth in the kitchen thinking about how to save her family from whatever terrible circumstances they faced at the moment. Because of her determination, she and all her children escaped from Breslau to the west after another hard year and another austere Christmas.

My grandmother always enjoyed Christmas -- not because of the gifts, but because her family was together and safe. She had learned to enjoy the time you have with the people you love. She also knew that no matter what the future brings, you can find your way out of almost anything if you don’t give up hope. And she was confident that her grandchildren would never experience in America what her family had endured in Nazi Germany.

My grandmother taught me by her example that determination and optimism can take you almost anywhere, no matter what obstacles you face. Even what appears to be a terrible blow can sometimes turn out for the best. As we celebrate a holiday that is about the birth of hope and salvation, I remember that lesson and am thankful that my family came to America, a nation of new beginnings. It has been a refuge for more than 200 years for immigrants fleeing the tyranny and darkness that pervades so many other places around the world. Merry Christmas!
Posted by jtf at 9:40 AM