No Surrender--At Least Not Yet

A review of U2: No Line On The Horizon. 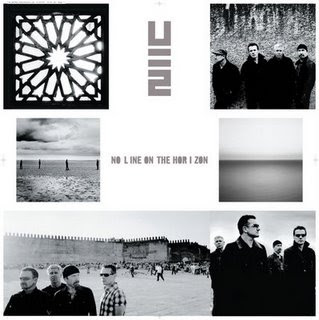 There's nothing worse than a music review written by a devotee of the band being reviewed. The result is invariably an excess of name-dropping and obscure references, all for the sake of proving one's street cred. By the end of the review, the critic has become a brainless fan declaring to the world, "This album rocks!"

This may happen here.

There was a moment, twenty years ago, when U2 could have ended things. Rattle and Hum (both movie and record) had been released, and the Lovetown Tour was wrapping up in Dublin. On the last night of the tour, Bono said to the crowd, "We've had a lot of fun over the last few months, just getting to know some of the music which we didn't know so much about--and still don't know very much about, but it was fun.... This is just the end of something for U2 . It's no big deal, it's just--we have to go away and ... and dream it all up again."

This naturally sparked rumors that Ireland's most famous rockers were about to break up. And though that was not their intention, the band did reach a critical juncture while recording their next album in Berlin. Things were not coming together and there was the thought that maybe they should just scrap everything--that is, until "One," which led to the dark masterpiece Achtung Baby. By this time, U2 had been in existence for 14 years, 4 years longer than the Beatles.

In the 18 years after Achtung Baby, which proved to critics that the band could reinvent itself, create new sounds, and remain prolific, the question has repeatedly come up: Can they do it again? Zooropa and Pop might have left some fans disconcerted, but All That You Can't Leave Behind and How to Dismantle an Atomic Bomb restored their faith (earning Grammys along the way). Still, the Edge had mentioned dissolving the band the moment they lost their originality--a notion that left the rest of us to wonder if that next album, whatever it is, would be the one to end it all.

Upon listening to No Line On The Horizon for the first time, the temptation is to say yes, this is it. They cannot possibly have more to sing about. They have run out of both ideas and melodies. It is Pop 2.0. Bono's voice is ragged (as in the opening verse of "Moment of Surrender," in which a screech ruins a fluid sound of bass, keyboards, and drums). There are more falsetto and conversational tones than soaring vocals. Another song, "FEZ-Being Born," might as well be "Miami" or that confused B-side of "The Fly," "Alex Descends Into Hell for a Bottle of Milk." "Breathe" is either "Acrobat" or "Please" (though the latter does have its merits, especially the live version that transitions to "Where the Streets Have No Name"). What did I say about obscure references?

But then I listened to it again. And again. Each time the songs seemed more nuanced, sophisticated, melodious, coherent. (This happens: Axl Rose and Slash supposedly cut class to hear Led Zeppelin's "D'yer Maker" for the first time, laughed hysterically at how stupid it sounded, and then fell in love with it. Besides, how many of you thought something was wrong with your speakers the first time you heard "Zoo Station"?) One of the reasons Joshua Tree worked so brilliantly was that one track seemed to effortlessly transition to the next. Bono had said as much about the album and how it wasn't meant to be split into two sides (back when it was on vinyl and cassette). "Running to Stand Still" should softly pick-up with "Red Hill Mining Town" like a sunrise over the desert. (No, I am not crying.) In any event, the same could be said, within limits, about No Line, which rises steadily and reaches its peak with "Get On Your Boots," before making a slow descent.

Musically, No Line is closely related to Achtung Baby, How to Dismantle, and, yes, Pop (not that there's anything wrong with that). A number of tracks feature a futuristic bass (critic J. Freedom du Lac compares it to a videogame sound) and the Edge's guitar is replete with reverb, as on the last album (fine: as on most albums). And while the guitarist may not be breaking new ground here, his restraint, such as in "Magnificent," is noteworthy. It builds and you expect the Edge to do more (aside from the standard solo), but he doesn't. In fact, you may be supplying missing notes of the phrase in your head. It leaves you wanting a bit more, resulting in a sort of delayed gratification. (Think back to the finale of "With or Without You," in which, only at the very end, do you hear the guitar break out into connected melodies, which could have gone on longer, but instead fades out. In the film Rattle and Hum, and in concert for a few years after, that end solo was fully realized, culminating in Bono's exclamation, "Yeah, we'll shine like stars in the summer night .")

As with any U2 album, Bono's lyrics will keep you guessing. Take, for instance, these lines from "Breathe": "Coming from a long line of traveling salespeople on my mother's side / I wasn't gonna buy just anyone's cockatoo." Suit yourself. In "One Tree Hill" on Joshua Tree, "Jara sang his song / a weapon / in the hands of love / you know his blood still cries from the ground." Who's Jara? Or from "Twilight": "My body grows and grows / It frightens me you know / An old man tried to walk me home / I thought he should know." Don't even think it.

And there are certain types of phrases Bono loves, such as "It's not if I believe in love / But if love believes in me" in "Moment of Surrender" from the current album, which is like "What you thought was freedom was just free." But it works as Bono soulfully pleads his case for, if I'm not mistaken, love. On the other hand, the curious incantations in "Unknown Caller" make me wonder if all four band members will have to provide that chorus in concert. And can one really keep a straight face while singing, "Force quit / And move to trash"?

Quibbles. By and large Bono knows not to take himself too seriously. In the upbeat "Stand Up Comedy," he sings, "Stand up to rock stars, Napoleon in high heels / Josephine, be careful of small men with big ideas." There is no greater taboo subject in the world of U2 than Bono's height--just check out his shoes in any photo. And while there are serious tracks like "White as Snow" (to the tune of "Oh Come, Oh Come, Emanuel") about the death of a soldier in Afghanistan, No Line is a mostly optimistic offering, with standouts like "I'll Go Crazy If I Don't Go Crazy Tonight" and, of course, "Get On Your Boots" (one lyric: "I don't want to talk about the wars between nations / not right now"). The effort is there--clearly, while Bono has gone about saving the world, the Edge, Larry Mullen, and Adam Clayton have been busying themselves fine-tuning their instruments.

Fans can ultimately breathe a sigh of relief that No Line On The Horizon is not the end of that "musical journey" (yes, a movie line from Rattle and Hum). It is both hopeful and harmonious, which is more than you can ask from a band that is 33 years old. At some point, however, there will be an end--an Abbey Road, a Synchronicity. After all, by the time the band opens the tour in Spain this summer, Bono will be 49. (This is inevitably followed by the realization that I am no longer 14, listening to Joshua Tree on my Sony Walkman, looking for some deep revelation in "Exit.")

Oh, and in case I forgot to mention it, this album rocks.

Victorino Matus is assistant managing editor at THE WEEKLY STANDARD. Somewhere in his basement is a baseball cap bearing the words "Pop Mart."
Posted by jtf at 9:46 AM