The Pursuit of Knowledge

The family in which I was raised was, in the matter of religion, typical of postwar England. There was no objection to the children receiving Christian instruction at school, and performing there a daily act of worship. There was no objection to chapel and Sunday school—indeed, provided these institutions were gloomy enough, my parents thought, their children could only be improved by them. But the home was a religion-free zone: no grace before meals, no prayers at bedtime, and the Bible wedged firmly on the shelf between the Oxford Dictionary and Winston Churchill's History of the Second World War. Our parents called themselves humanists. They had been raised as Christians, but had lived through the Second World War and lost faith in the God who permitted it. They regarded humanism as a residual option, once faith had dissolved. It was not something to make a song and dance about, still less something to impose on others, but simply the best they could manage in the absence of God.

All around me I encountered humanists of my parents' kind. I befriended them at school, and was taught by them at Cambridge. And whenever I lost the Christian faith which had first dawned on me in school assemblies I would be a humanist for a spell, and feel comforted that there existed this other and more tangled path to the goal of moral discipline. Looking back on it, I see the humanism of my parents as a kind of rearguard action on behalf of religious values. They, and their contemporaries, believed that man is the source of his own ideals and also the object of them. There is no need for God, they thought, in order to live with a vision of the higher life. All the values that had been appropriated by the Christian churches are available to the humanist too. Faith, hope, and charity can exist as human causes, and without the need for a heavenly focus; humanists can build their lives on the love of neighbor, can exercise the virtues and discipline their appetites so as to be just, prudent, temperate, and courageous, just as the Greeks had taught, long before the edict of the Church had fallen like a shadow across the human spirit. A humanist can be a patriot; he can believe with Jesus that "greater love hath no man than this, that he should lay down his life for his friend." He is the enemy of false sentiment and lax morals, and all the more vigilant on behalf of morality in that he believes it to be the thing by which humanity is exalted, and the proof that we can be the source of our own ideals.

That noble form of humanism has its roots in the Enlightenment, in Kant's defense of the moral law, and in the progressivism of well-meaning Victorian sages. And the memory of it leads me to take an interest in something that calls itself "humanism," and is now beginning to announce itself in Britain. This humanism is self-consciously "new," like New Labour; it has its own journal, the New Humanist, and its own sages, the most prominent of whom is Richard Dawkins, author of The Selfish Gene and vice-president of the British Humanist Association. It runs advertising campaigns and letter-writing campaigns and is militant in asserting the truth of its vision and its right to make converts. But the vision is not that of my parents. The new humanism spends little time exalting man as an ideal. It says nothing, or next to nothing, about faith, hope, and charity; is scathing about patriotism; and is dismissive of those rearguard actions in defense of the family, public spirit, and sexual restraint that animated my parents. Instead of idealizing man, the new humanism denigrates God and attacks the belief in God as a human weakness. My parents too thought belief in God to be a weakness. But they were reluctant to deprive other human beings of a moral prop that they seemed to need. 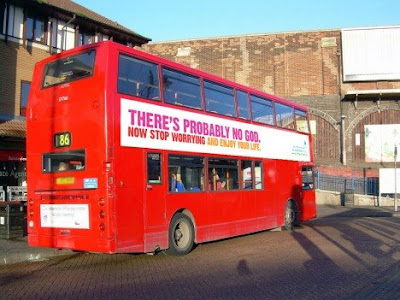 The British Humanist Association is currently running a campaign against religious faith. It has bought advertising space on our city buses, which now patrol the streets declaring that "There probably is no God; so stop worrying and enjoy life." My parents would have been appalled at such a declaration. From a true premise, they would have said, it derives a false and pernicious conclusion. Had they wished to announce their beliefs—and it was part of their humanism to think that you don't announce your beliefs but live them—they would have expressed them thus: "There probably is no God; so start worrying, and remember that self-discipline is up to you." The British Humanist Association sees nothing wrong with the reference to enjoyment; it seems to have no consciousness of what is clearly announced between the lines of the text, namely that there are no ideals higher than pleasure. Its publications imply that there is only one thing that stands between man and his happiness, and that is the belief in God. Take that belief away, and we can run out into the garden of permissions, picking the fruit that we wrongly thought to have been forbidden. The humanists I knew as a young man would have reacted with disgust at this hedonistic message, and at a philosophy that aims to dispense with God without also aiming to replace Him.

BUT THE BUS adverts fit the spirit of modern Britain, and not even the Muslims complain about them. One Christian bus driver has refused to drive his bus, and a few hundred people have written to the Advertising Standards Council, which has rejected their complaint, but that is as far as the protests have gone. When, in the light of this advertising campaign, I look back at the humanist movement that I encountered as an adolescent, one thing above all strikes me: that the old humanism was not about deconstructing God; it was about constructing man. It was a positive movement, devoted to seeking things worthy of emulation and sacrifice, even if there is no God to promote them. Its principal fear was that, deprived of religious belief, people would let go of their ideals. Hence it urgently sought a new basis for moral restraint in the idea of human dignity.

The old humanism was not a pleasure-seeking, still less a pleasure-loving philosophy. It took its inspiration from Enlightenment philosophers, from Milton, Blake, and D. H. Lawrence, and from the legacy of Western art. The humanist who most influenced me at Cambridge believed that in no works had humanity been more blessed by true ideals than in the St. Matthew Passion of Bach and the Tristan und Isolde of Wagner, the one a work of Christian devotion, the other a work that makes no mention of God or gods, but simply dwells on the exalted nature of erotic love when tied to mutual sacrifice. Although I was skeptical toward that kind of humanism, I never doubted its nobility of purpose. It was devoted to exalting the human person above the human animal, and moral discipline above random appetite. It saw art, music, and literature not simply as pleasures, but as sources of spiritual strength. And it took the same view of religion. Humanists of the old school were not believers. The ability to question, to doubt, to live in perpetual uncertainty, they thought, is one of the noble endowments of the human intellect. But they respected religion and studied it for the moral and spiritual truths that could outlive the God who once promoted them.

Observing the new humanism from my old perspective I am struck not only by its lack of positive belief, but also by its need to compensate for this lack by antagonism toward an imagined enemy. I say "imagined," since it is obvious that religion is a declining force in Britain. There is no need to consult the pronouncements of the Archbishop of Canterbury: the response to the bus campaign abundantly proves the point. But a weak enemy is precisely what these negative philosophies require. Like so many modern ideologies, the new humanism seeks to define itself through what it is against rather than what it is for. It is for nothing, or at any rate for nothing in particular. Ever since the Enlightenment there has been a tendency to adopt this negative approach to the human condition, rather than to live out the exacting demands of the Enlightenment morality, which tells us to take responsibility for ourselves and to cease our snivelling. Having shaken off their shackles and discovered that they have not obtained contentment, human beings have a lamentable tendency to believe that they are victims of some alien force, be it aristocracy, the bourgeoisie, capitalism, the priesthood, or simply the belief in God. And the feeling arises that they need only destroy this alien force, and happiness will be served up on a plate, in a garden of pleasures. That, in my view, is why the Enlightenment, which promised the reign of freedom and justice, issued in an unending series of wars.

I never thought, when I finally put the old humanism behind me, that I would ever feel nostalgia over its loss. But now I recognize that it was not only noble in itself, but was also a serious attempt to retain the belief in nobility without the theological vision on which that belief had once depended. It was, in effect, a proof of the ideal that it proposed: an example of how human beings can provide themselves with values, and then live up to them.

- Roger Scruton, the writer and philosopher, is most recently the author of Gentle Regrets: Thoughts From a Life (Continuum).
Posted by jtf at 8:12 AM