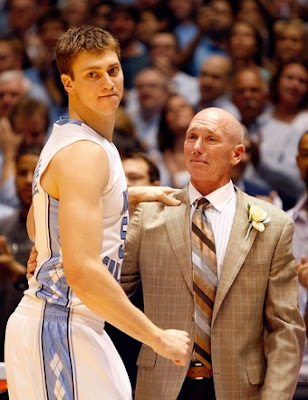 CHAPEL HILL, NC - MARCH 08: Tyler Hansbrough #50 of the North Carolina Tar Heels with his father, Gene, before the start of their game against the Duke Blue Devils on senior night at the Dean E. Smith Center on March 8, 2009 in Chapel Hill, North Carolina. (Getty Images)


CHAPEL HILL, N.C. -- She sounded as only a member of the dance team at a Deep South flagship state university can. She had just enough brass in her voice -- a voice that will serve her well when she's managing accounts, analyzing financials or selling McMansions in five years -- to seem perfectly justified in her intrusion on the quiet time of a campus legend.

"Come ohn, Psy-cho Tee!" she yelled Sunday afternoon as the legend walked back to the locker room from his final pre-game shootaround at the Dean Dome. Tyler Hansbrough barely noticed. North Carolina's all-time leading scorer wore the same expression he always wears before he pours another gallon of sweat onto the hardwood.

Behind that blank stare, Hansbrough's mind spun. Later, after the Tar Heels had escaped from a suddenly dangerous Duke team with a 79-71 win, after fellow senior Danny Green had danced one more time to "Jump Around" and after Hansbrough bade a sob-choked goodbye to the North Carolina faithful, Hansbrough catalogued the litany of issues weighing on his brain as tipoff approached.

"It's a hard game to play," said Hansbrough, who scored 17 points and grabbed eight rebounds. "First of all, you're thinking about everything. You're thinking about your after-game speech -- who you're going to thank. You're thinking, 'Oh man, this is my last game in the Dean Dome.' Then you start thinking about how your college career is coming to an end. All that, and you're still trying to focus on the game to get this win."

"This win" was a fitting home sendoff for a 6-foot-9, 250-pound fireball who makes every basket, every rebound look labor-intensive. As Michael Jordan, Larry Brown, Sean May and a host of Tar Heel luminaries watched from the second row, North Carolina made just enough plays to dispatch a group of Blue Devils who have reinvented themselves in the past three weeks. The win clinched an outright ACC regular-season title for the Tar Heels, and it further cemented Carolina as a No. 1 seed in the NCAA Tournament.

Even though Jordan's presence somehow inspired Hansbrough to channel the spirit of Jordan's former Bulls teammate Craig Hodges -- Hansbrough made his 11th and 12th career 3-pointers in the first half -- the Tar Heels couldn't shake the pesky Blue Devils, who got all their points from their starters. Duke coach Mike Krzyzewski said the game came down to a handful of plays in the second half. Those plays, in order, were these: 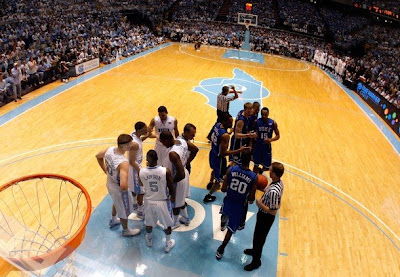 • Finally, after Duke forward Kyle Singler (23 points) made two free throws to cut Carolina's lead to 73-69 with 1:50 remaining, the Tar Heels needed to answer again. For the first time, they didn't. Point guard Ty Lawson, who played in spite of a painful big toe injury suffered Friday, missed a jumper. Singler grabbed the rebound with 1:18 remaining. Then, as Singler tried to throw an outlet pass, one of his sneakers grazed the baseline. Carolina ball. Lawson, a junior who may have played his final game in Chapel Hill, scored 14 seconds later.

Neither Krzyzewski nor his players could feel too badly Sunday about the way the Blue Devils played in a hostile environment against a Final Four-caliber team that would have done just about anything to send a group of beloved seniors out with a win in their final home game. On Feb. 11, the Tar Heels ran the Blue Devils out of Cameron Indoor Stadium, outscoring them 57-35 in the second half of a 101-87 win.

Other than the continued lack of an inside presence -- an issue that can't be fixed this season -- these Blue Devils seemed so much more capable this time of challenging an elite team. The paradigm shift came Feb. 19, when Krzyzewski inserted freshman guard Elliot Williams in the starting lineup. Essentially, he plunged a syringe of pure adrenalin into the hearts of the Blue Devils. Duke is 5-1 since, and it wouldn't seem the least bit shocking if Duke and Carolina meet next Sunday in the final of the ACC Tournament and Duke won. The Blue Devils lost Sunday because they shot 8 of 25 from the field in the second half. But they weren't taking bad shots; on another day, some of those shots fall.

"We want to be our best come the postseason. We're definitely the best team we've been now," Scheyer said. "That's as opposed to last year or the year before, when we may have been our best midseason." 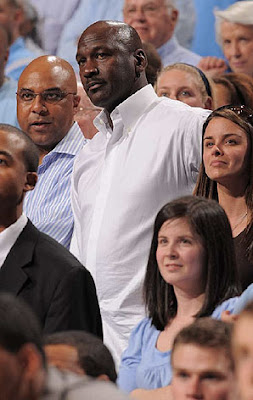 North Carolina players noticed the improvement, but they couldn't allow the Blue Devils to ruin the going-away party for a group of players who cemented their place in the hearts of Tar Heels everywhere as freshmen on a defending national champ gutted by early departures to the NBA. Their defining moment that season? On senior day at Cameron, Hansbrough scored 27, fellow freshman Bobby Frasor made a pair of clutch free throws and Green stripped Sean Dockery in the waning seconds to help seal an 83-76 stunner against top-ranked Duke.

"Nothing," Hansbrough said Sunday, "has topped that yet."

So naturally, neither Hansbrough, Frasor, Green wanted to see their senior day ruined in a similar fashion. Tar Heels coach Roy Williams challenged his younger players to ensure the seniors got the proper sendoff.

"I always try to put pressure on the underclassmen," Williams said, "to send the seniors out the right way."

During late timeouts, long after the Tar Heels realized the Blue Devils weren't going away, no one spoke of the terrible pall a loss would cast on the traditional postgame goodbyes, when each senior gets his chance to address the crowd. No one had to say anything.

"There wasn't any talk," Hansbrough said, "but it was on everybody's mind."

And so every time the Tar Heels needed a play, someone came through. With 13.8 seconds remaining, Hansbrough checked out of his final game at the Dean Dome. After the buzzer had sounded and the Tar Heels had cut down a net to celebrate their ACC title, Hansbrough stood on the court, a microphone in his hand and tears in his eyes.

"It's kind of hard to put into words what my experience at Carolina has been like," Hansbrough said. Then he found the perfect words. "It's been the best four years of my life."
Posted by jtf at 5:56 AM