The government last week released its annual statistical report on poverty and household income. As usual, we -- meaning the public, the media and politicians -- missed a big part of the story. It is this: The stubborn persistence of poverty, at least as measured by the government, is increasingly a problem associated with immigration. As more poor Hispanics enter the country, poverty goes up. This is not complicated, but it is widely ignored. 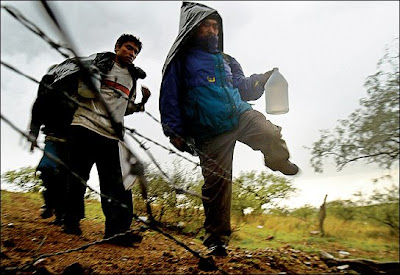 The standard story is that poverty is stuck; superficially, the statistics support that. The poverty rate measures the share of Americans below the official poverty line, which in 2006 was $20,614 for a four-person household. Last year, the poverty rate was 12.3 percent, down slightly from 12.6 percent in 2005 but higher than the recent low, 11.3 percent in 2000. It was also higher than the 11.8 percent average for the 1970s. So the conventional wisdom seems amply corroborated.

Only an act of willful denial can separate immigration and poverty. The increase among Hispanics must be concentrated among immigrants, legal and illegal, as well as their American-born children. Yet, this story goes largely untold. Government officials didn't say much about immigration when briefing on the poverty and income reports. The American Enterprise Institute, a conservative-leaning think tank, and the Center on Budget and Policy Priorities, a liberal advocacy group for the poor, both held briefings. Immigration was a common no-show.

Why is it important to get this story straight?

One reason is truthfulness. It's usually held that we've made little, if any, progress against poverty. That's simply untrue. Among non-Hispanic whites, the poverty rate may be approaching some irreducible minimum: people whose personal habits, poor skills, family relations or bad luck condemn them to a marginal existence. Among blacks, the poverty rate remains abysmally high, but it has dropped sharply since the 1980s. Moreover, taking into account federal benefits (food stamps, the earned-income tax credit) that aren't counted as cash income would further reduce reported poverty.

We shouldn't think that our massive efforts to mitigate poverty have had no effect. Immigration hides our grudging progress.

A second reason is that immigration affects government policy. By default, our present policy is to import poor people. This imposes strains on local schools, public services and health care. From 2000 to 2006, 41 percent of the increase in people without health insurance occurred among Hispanics. Paradoxically, many Hispanics are advancing quite rapidly. But assimilation -- which should be our goal -- will be frustrated if we keep adding to the pool of poor. Newcomers will compete with earlier arrivals. In my view, though some economists disagree, competition from low-skilled Hispanics also hurts low-skilled blacks.

We need an immigration policy that makes sense. My oft-stated belief is that legal immigration should favor the high-skilled over the low-skilled. They will assimilate quickest and aid the economy the most. As for present illegal immigrants, we should give most of them legal status, both as a matter of practicality and fairness. Many have been here for years and have American children. At the same time, we should clamp down on new illegal immigration through tougher border controls and employer sanctions.

Whatever one's views, any sensible debate requires accurate information. There's the rub. Among many analysts, journalists and politicians, it's politically or psychologically discomforting to discuss these issues candidly. Robert Greenstein, head of the Center on Budget and Policy Priorities, says his group focuses on short-term trends, where immigration's role isn't so apparent. Conveniently, that avoids antagonizing some of the center's supporters.

Journalists are also leery of making the connection. Fifty-four reporters signed up for the center's briefing last week. With one exception (me), none asked about immigration's effect on poverty or incomes. But the evidence is hiding in plain sight, and the facts won't vanish just because we ignore them.
Posted by jtf at 10:17 PM