"The Holy Year of St. Paul"

The first-time visitor to Rome is drawn inexorably to St. Peter’s basilica, the most famous church in the world, at the heart of Vatican City. Built above what is believed to be the actual bones of the apostle Peter, this church has been the home of the popes since the Middle Ages. Catholics believe that the pope is the successor of St. Peter and that he has a special Petrine ministry in the Church today. 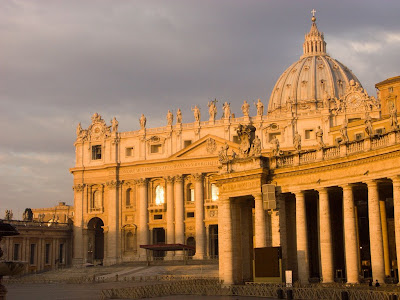 But the church at Rome has a dual apostolic foundation. The apostle Paul also preached in Rome and, like Peter, was put to death at the command of the emperor Nero during his fierce persecution of Roman Christians.

This year marks the 2000th anniversary of the birth of Paul, the most influential Christian in the early Church, apart from Jesus himself. Benedict XVI has called for a twelve-month celebration to honor “The Holy Year of St. Paul.” The Vatican has marked the celebration, which began this past summer on June 28, by issuing a stamp and a new 2-euro coin. A year dedicated to St. Paul is a good occasion for all Christians to ponder the legacy of the person who founded more churches and wrote more biblical books than anyone else.

Peter and Paul did not always see eye to eye on how to carry out their mission, and Peter declared Paul’s letters “hard to understand.” Paul and his ideas have been controversial throughout the history of the Church. Paul’s teaching has stirred many reforms and renewals led by great theologians such as Augustine, Luther, Pascal, Wesley, and Barth; but Paul has also been derided and denounced. Nietzsche called Paul a dysangelist, a preacher of bad news, and this opinion has been echoed by many others. Jesus, some say, preached a simple message of love and brotherhood which was perverted by Paul with his legalism and intellectualism—justification, predestination, and all that.

In fact, the earliest written evidence we have of Jesus comes from Paul. His description of the Last Supper in I Corinthians 11 was written decades before any of the gospels. Paul was writing to communities of faith who already knew about the words and deeds of Jesus through oral traditions. He wrote to teach them the meaning of what they believed. No doubt, Paul would have been surprised to learn that so many of his letters eventually “made the Bible.” He wrote them on the run, so to speak, from prison cells, house churches, and byways of the Roman Empire.

Jerome once said that when he read the letters of the apostle Paul he could hear thunder. Those same rumblings can still be heard today. He could be critical and caustic. “My dear idiots!” he wrote to the Galatians (3:1, Phillips). But there was another side to Paul as well—tender, persuasive, yearning. He writes as a father in God and once compared himself to a mother undergoing the pains of childbirth for the sake of his spiritual progeny. 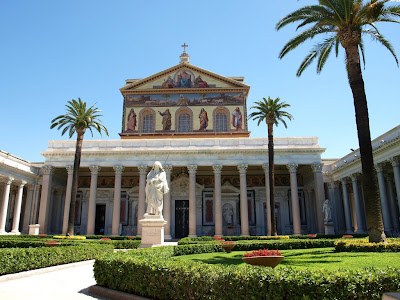 Paul can be quoted and misquoted on every hot-button issue faced by the Church today, from gender roles to global warming. The heart of his message was what he called simply “the gospel of God.” He believed that the God of Israel had made known his grace and love for all persons in the life, death, and resurrection of Messiah Jesus. To follow Jesus meant making the love of Christ known in all the world. Paul was the apostle of Christian unity. He never tired of imploring his fellow Christians to “seek the unity of the Spirit in the bond of peace.” “Let this mind be in you which was also in Christ,” he urged (Eph. 4:3; Phil. 2:5). That Paul himself did not always live up to this ideal, and that many Christians through the centuries have certainly not done so, is no excuse for our own failures.

On the road to Ostia near the Tiber River stands the basilica of St. Paul Outside-the-Walls. Equally venerable if less ornate that St. Peter’s, this church dates back to the time of Constantine. Inside is a sarcophagus with the tomb of Paul. Since the second century of the common era, Christian pilgrims have gathered here to pray, worship, and reflect on the wisdom in Paul’s writings. They still do. His message of reconciliation, of God’s free grace revealed most fully in the face of Jesus Christ, is still relevant in our fear-haunted, fragile world today.

In the theological study group known as Evangelicals and Catholics Together, we have been led to affirm our unity as brothers and sisters in Christ. We have pondered together the meaning of Paul’s words. Though important theological differences remain, we have learned from Paul that the more we are drawn to Christ, the closer we come to one another. After all, it was Paul who taught us that the three greatest virtues are faith, hope, and love, and that the greatest of these is love.

Timothy George is the founding dean of Beeson Divinity School of Samford University and a member of the editorial board of First Things.
Posted by jtf at 10:08 AM