A real referendum on hope and change is taking place in western Pennsylvania's 12th congressional district. If the change agent in the race were a Democrat and the status quo defender were a Republican, this battle would be all over the nightly news. The challenger would be heralded as a maverick and photographed with halo effect and angel wings. Instead, the national media have ignored him. 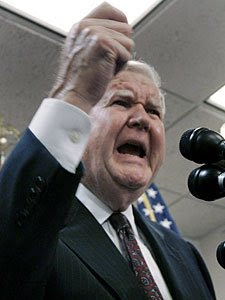 The Democratic candidate in this race has devoted his public career to back-scratching, logrolling and self-aggrandizing Beltway politics as usual. The Republican candidate is a fresh-faced newcomer and decorated combat veteran fighting to topple the arrogant old crony.

The symbol of everything wrong with Washington is 18-term Democratic Rep. John Murtha, king of congressional pork and infamous Abscam sting target who was videotaped entertaining a $50,000 bribe from undercover FBI agents posing as emissaries for Arab sheiks trying to enter our country illegally in the 1980s. Most recently, in June, the Democratic porkmeister was caught intervening on behalf of a law-breaking Pennsylvania company convicted of selling military equipment parts illegally overseas and knowingly violating national security rules.

The champion for hope and change is GOP challenger Bill Russell, a Desert Storm veteran, former Army lieutenant colonel and Army reservist who survived the Sept. 11 terrorist attack on the Pentagon.

I reported to you in this column on July 23 that Russell is "the man who could topple John Murtha". (His campaign website is russellbrigade.com.) Victory seemed like a nearly impossible miracle three months ago. Now, Murtha is on the ropes and finally feeling the heat.

On Thursday, a new poll by Dane and Associates put Russell ahead of Murtha by 48-35. A separate Susquehanna poll released Wednesday put entrenched incumbent Murtha up over Russell by just a little more than 4 percentage points. That's within the poll's 4.9-point margin of error. Murtha's in so much trouble he decided to cut and run from a scheduled debate with Russell last week.

Last week, Murtha derided his own constituents as racial bigots. He told the Pittsburgh Post-Gazette, "There's no question that western Pennsylvania is a racist area." It's a sentiment Murtha's man Barack Obama infamously voiced at a San Francisco fundraiser in April, when he said small-town Pennsylvanians were "bitter, they cling to guns or religion or antipathy to people who aren't like them or anti-immigrant sentiment or anti-trade sentiment as a way to explain their frustrations."

After initially backing away from his Obama-inspired trashing of Pennsylvania voters, Murtha dug a deeper hole—telling a Pittsburgh television station that "this whole area, years ago, was really redneck."

Of course, black Republicans aren't really black in the eyes of the intolerant left—which speaks volumes about the unrepentant prejudices of the race-card players. In the Democratic Party, diversity is and always will be only skin deep.

Thanks to word-of-mouth and grassroots Internet activism, Russell's conservative counterinsurgent campaign has succeeded in keeping pace with Murtha's fundraising. This despite Murtha's massive advantage in PAC donations, national name recognition and incumbency perks.

Russell's surge is all the more extraordinary because he was a write-in candidate on active duty until Aug. 1 of this year and unable to actively campaign while completing his military service. He jumped into the race after hearing Murtha's slanderous 2006 accusations that Marines in Haditha "overreacted because of the pressure on them, and they killed innocent civilians in cold blood."

As I've noted previously, seven Marines have been cleared or won case dismissals in the Iraq war incident Murtha recklessly adjudicated in the court of public opinion—with willing mainstream accomplices at The New York Times, MSNBC and in the world press swinging their nooses to Murtha's beat.

No wonder the news hounds prefer to keep this race out of the headlines.

Republicans face tough odds across the country. A Russell upset over the nation's dirtiest Democrat promises a silver lining.

Murtha's constituents are ready to throw the bum out. And not a moment too soon.