MOSCOW — Prophets, it is said, are supposed to be without honor in their homeland. Yet Moscow has just witnessed the extraordinary sight of Aleksandr Solzhenitsyn — the dissident and once-exiled author of "The Gulag Archipelago" and "One Day in the Life of Ivan Denisovich" — receiving what amounts to a state funeral, with Prime Minister Putin acting as chief mourner.

So, even in death, Aleksandr Solzhenitsyn will, it seems, remain a force to be reckoned with. But will he be a force in keeping with the liberating vistas of his greatest works?

Sadly, art in Russia is always used to reinforce the narcissism of power. Solzhenitsyn was used in this way twice. The paradox is that, in the Soviet era, his art was used, briefly, as a force for liberation, because Nikita Khrushchev allowed the publication of "One Day in the Life of Ivan Denisovich" in order to buttress his anti-Stalin thaw. In today's supposedly free and democratic Russia, however, Solzhenitsyn is idealized for his nationalism and Orthodox messianism, his contempt for the West's supposed decadence, all messages that Mr. Putin's regime proclaims loudly and daily.

The old Soviet iconography has broken down completely; despite heroic efforts, not even Mr. Putin could restore Lenin, Stalin, and the old Soviet pantheon. Yet the Kremlin understands that something is needed to replace them as Russia adapts to its new oil-fueled autocracy. Solzhenitsyn, one of the most famous and heroic dissidents of the Soviet era, now seems certain to become a towering figure in the iconography of Putinism.

Throughout his presidency, Mr. Putin repeatedly invoked Russia as an ancient, powerful, and divinely ordained state going back 1,000 years, a civilization separate from the West, neither communist nor a western liberal democracy. That message echoes Solzhenitsyn's famous commencement address at Harvard in 1978: "Any ancient deeply rooted autonomous culture, especially if it is spread on a wide part of the earth's surface, constitutes an autonomous world, full of riddles and surprises to Western thinking. For one thousand years, Russia has belonged to such a category." 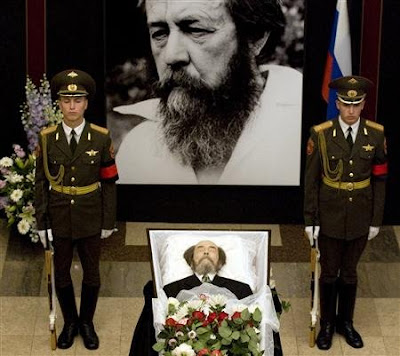 The body of writer and former Soviet dissident Alexander Solzhenitsyn lies in state at the Academy of Science in Moscow August 5, 2008.
REUTERS/Sergei Karpukhin

For Solzhenitsyn, a survivor of the gulag system enforced by the KGB, the desire to see Russia as a great nation, its eternal spirit superior to the West's vulgar materialism, found him in old age supporting an ex-KGB man, Mr. Putin, who once said that there is no such thing as an ex-KGB man and who sees the Soviet Union's collapse as the greatest geopolitical catastrophe of modern times. Despite this, Solzhenitsyn seemed to accept Mr. Putin as a "good dictator," whose silencing of his critics enhances Russia's soul.

It is a sad testament to Russia's current mindset that it is Solzhenitsyn the anti-modernist crank who is being remembered, not Solzhenitsyn the towering foe of Soviet barbarism and mendacity. Today, his writing is seen as buttressing the state, not individual freedom. Works such as "The Red Wheel" series of novels, a tedious account of the end of Imperial Russia and the creation of the USSR, or his last book, written in 2001, entitled "Two Hundred Years Together" on the history of Russian-Jewish coexistence, seems backward, preachy, conservative, unenlightened, at times even anti-Semitic, and smack of Solzhenitsyn's own grim authoritarianism.

Both Mr. Putin and Khrushchev sought to use Solzhenitsyn for their own purposes. Mr. Putin vowed to revive the moral fiber of the Russians, their glory and international respect. To achieve this goal he sought to restore high culture to a position of primacy in Russian life, and to put the press in its (politically) subservient place. Mr. Putin held up Solzhenitsyn as a model for those who stand for the ideal of Great Russia — "an example of genuine devotion and selfless serving of the people, fatherland, and the ideals of freedom, justice, and humanism."

Under Khrushchev, however, Solzhenitsyn's work was used to liberate the country from the grip of Stalinism. In choosing to allow "One Day in the Life of Ivan Denisovich" to be published, Khrushchev knew that he was undermining the entire Soviet era up to that point. But, with Khrushchev's overthrow in 1964, Leonid Brezhnev lost no time in restoring orthodoxy and purging books that threatened the Party's reputation. Solzhenitsyn was banned, driven first underground and then into exile. 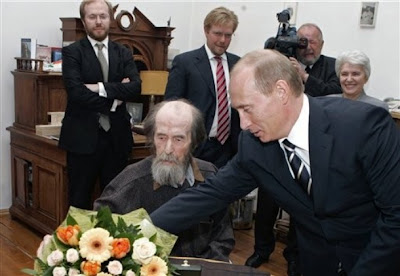 Russian President Vladimir Putin, right, visits Alexander Solzhenitsyn, center, in his house in Troitse-Lykovo in the outskirts of Moscow, Tuesday, June 12, 2007. Shown from left in the background are, Solzhenitsyn's sons, Stepan and Yermolai, an unidentified cameraman and Solzhenitsyn's wife, Natalya. While celebrating the holiday of Russia's emergence from the crumbling Soviet Union, Putin honored the Nobel laureate and longtime exile who documented the murderous Soviet prison camp system, with an award for humanitarian achievement and visited the ailing 88-year-old author, who has not appeared in public in recent years.

Yet Khrushchev, isolated and in disgrace, continued to see a bond between himself and the great author. As Solzhenitsyn wrote in his memoir "The Oak and the Calf": "as late as 1966, he [Khrushchev] sent me New Year's greetings — which astonished me because I was on the brink of arrest. Perhaps (in his disgrace) he did not know."

One lesson of the 1989 revolution in Eastern Europe is the value of having truly democratic-minded figures lead the escape from communism. Poland had Lech Walesa, Czechoslovakia Václav Havel. Both kept their countries calm during wrenching transitions. Russia, sadly, had no one with the moral authority to soothe people's passions. Only Solzhenitsyn and Andrei Sakharov came near to Messrs. Walesa and Havel in terms of moral authority, but Sakharov was dead by the time communism collapsed, and Solzhenitsyn's ideas were too conservative, too tied to Russian nationalism, for him to become a symbol of democracy in a multinational Soviet Union.

The tragedy of Solzhenitsyn is that, although he played a mighty role in liberating Russia from totalitarianism, he had nothing to say to ordinary Russians after their liberation, except to chastise them. Yet perhaps one day we Russians will escape our false dreams, and when that day comes, the heroic Solzhenitsyn, the Solzhenitsyn who could never surrender or be corrupted, will be restored to us. But it is now that we need that Solzhenitsyn most. For to paraphrase Milton's "Paradise Lost" on the illumination of Hell, "Solzhenitsyn's is no light, but rather darkness visible."

- Ms. Khrushcheva teaches international affairs at the New School in New York, and is the author of "Imagining Nabokov: Russia Between Art and Politics."
Posted by jtf at 10:26 AM