A Catholic Case Against Barack Obama 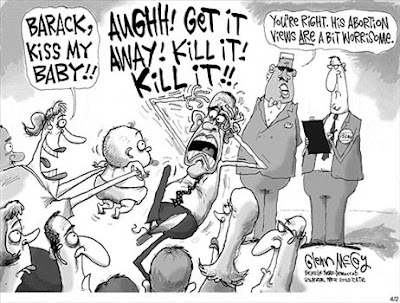 In the Pennsylvania primary, Barack Obama rolled up more than 90 percent of the African-American vote. Among Catholics, he lost by 40 points. The cool liberal Harvard Law grad was not a good fit for the socially conservative ethnics of Altoona, Aliquippa and Johnstown.

But if Barack had a problem with Catholics then, he has a far higher hurdle to surmount in the fall, with those millions of Catholics who still take their faith and moral code seriously.

For not only is Barack the most pro-abortion member of the Senate, with his straight A+ report card from the National Abortion Rights Action League and Planned Parenthood. He supports the late-term procedure known as partial-birth abortion, where the baby's skull is stabbed with scissors in the birth canal and the brains are sucked out to end its life swiftly and ease passage of the corpse into the pan.

Partial-birth abortion, said the late Sen. Pat Moynihan, "comes as close to infanticide as anything I have seen in our judiciary."

Yet, when Congress was voting to ban this terrible form of death for a mature fetus, Michelle Obama was signing fundraising letters pledging that, if elected, Barack would be "tireless" in keeping legal this "legitimate medical procedure."

And Barack did not let the militants down. When the Supreme Court upheld the congressional ban on this barbaric procedure, Barack denounced the court for denying "equal rights for women."

As David Freddoso reports in his new best-seller, The Case Against Barack Obama, the Illinois senator goes further than any U.S. senator has dared go in defending what John Paul II called the "culture of death."

Thrice in the Illinois legislature, Obama helped block a bill that was designed solely to protect the life of infants already born, and outside the womb, who had miraculously survived the attempt to kill them during an abortion. Thrice, Obama voted to let doctors and nurses allow these tiny human beings die of neglect and be tossed out with the medical waste.

How can a man who purports to be a Christian justify this?

If, as its advocates contend, abortion has to remain legal to protect the life and health, mental and physical, of the mother, how is a mother's life or health in the least threatened by a baby no longer inside her -- but lying on a table or in a pan fighting for life and breath?

How is it essential for the life or health of a woman that her baby, who somehow survived the horrible ordeal of abortion, be left to die or put to death? Yet, that is what Obama voted for, thrice, in the Illinois Senate.

When a bill almost identical to the one Barack fought in Illinois, the Born Alive Infants Protection Act, came to the floor of the U.S. Senate in 2001, the vote was 98 to 0 in favor. Barbara Boxer, the most pro-abortion member of the Senate before Barack came, spoke out on its behalf:

"Of course, we believe everyone should deserve the protection of this bill. ... Who could be more vulnerable than a newborn baby? So, of course, we agree with that. ... We join with an 'aye' vote on this. I hope it will, in fact, be unanimous."

Obama says he opposed the Born Alive Infants Protection Act because he feared it might imperil Roe v. Wade. But if Roe v. Wade did allow infanticide or murder, which is what letting a tiny baby die of neglect or killing it outright amounts to, why would he not want that court decision reviewed and amended to outlaw infanticide?

Is the right to an abortion so sacrosanct to Obama that killing by neglect or snuffing out of the life of tiny babies outside the womb must be protected if necessary to preserve that right?

Obama is an abortion absolutist. "I could find no instance in his entire career," writes Freddoso, "in which he voted for any regulation or restriction on the practice of abortion."

In 2007, Barack pledged that, in his first act as president, he will sign the Freedom of Choice Act, which would cancel every federal, state or local regulation or restriction on abortion. The National Organization for Women says it would abolish all restrictions on government funding of abortion.

What we once called God's Country would become the nation on earth most zealously committed to an unrestricted right of abortion from conception to birth.

Before any devout Catholic, Evangelical Christian or Orthodox Jew votes for Obama, he or she might spend 15 minutes in Chapter 10 of Freddoso's "Case Against Barack." For if, as Catholics believe, abortion is the killing of an unborn child, and participation in an abortion entails automatic excommunication, how can a good Catholic support a candidate who will appoint justices to make Roe v. Wade eternal and eliminate all restrictions on a practice Catholics legislators have fought for three decades to curtail?

And which Catholic priests and prelates will it be who give invocations at Obama rallies, even as Mother Church fights to save the lives of unborn children whom Obama believes have no right to life and no rights at all?