Recruits Clamor for More From Coaches With Less

Tim Shaffer for The New York Times
College athletes in sports other than football and basketball, such as the Delaware shot-putter Chase Renoll, often receive only partial scholarships.

The country’s celebrity college football and basketball coaches lead nationally ranked teams on television, controlling a bevy of full scholarships and a sophisticated marketing machine that swathes college athletics with an air of affluence. They are far from typical.

More common is the soccer, lacrosse or softball coach who sits in a closet-sized office beside a $100 air conditioner and a 12-inch TV, trying to figure out ways to buy the best athlete possible for the least amount of scholarship money, which can be as little as $400. A jack-of-all-trades, this coach has a job that requires the skills of a stock portfolio manager, labor lawyer, headhunter, family counselor and soothsayer.

“There have been days when you feel like a used-car salesman,” said Joe Godri, the baseball coach at Villanova University. “I’ve always been completely honest, but you can’t get away from the fact that the process can be crazy. You pump up a kid so much to come to your place, and when he agrees, you say, ‘O.K., and what I’ve got for you is 25 percent of your cost to attend here.’

“And no one believes you, but that’s a good Division I baseball scholarship. You have to convince his parents that you’re being really fair.”

“It’s like we have a salary cap from the professional sports model,” said Godri, whose baseball program can dole out the equivalent of six full scholarships across four years. “Except we’re dealing in thousands, not millions, and we have to stretch it across 25 or 30 kids.”

Working against these college coaches is a perception in the hyper and driven youth sports culture that scholarship money is plentiful. Online recruiting services and private counselors promote the notion that some athletic scholarships go unclaimed.

In interviews with more than 20 college coaches and administrators at two representative N.C.A.A. Division I institutions, Villanova and the University of Delaware, the coaches said they routinely encountered parents with an almost irrational desire to have their children earn some kind of athletic scholarship. Sometimes the amount is irrelevant, as long as the child can attend his or her high school’s national letter of intent signing day and be feted in the local newspapers as a scholarship athlete.

“Parents say to me all the time: ‘Can’t you just throw her something? Just make her feel good,’ ” said Joanie Milhous, the Villanova field hockey coach. “I have to explain I don’t have money to throw around. I think these families have just invested so much in private lessons, tutors and camps, they can’t stand the thought of getting nothing at all back financially.”

The Delaware men’s track coach, Jim Fischer, added: “I’m somewhat amazed that the question of scholarship money always comes up, even when it’s an athlete I haven’t shown much interest in and who clearly isn’t a college-level player. When I meet with them, I sit there thinking, this parent will never even ask about money because their kid would have trouble making some high school teams. But you know what? They ask for money, too.”

Other coaches said athletes or their parents tried to be too wily in their scholarship negotiations.

“Families will try to play the coaches off each other,” said Kim Ciarrocca, who coaches women’s lacrosse at Delaware. “They’ll say that they’ve got a half or full scholarship offer from some school and want us to match it. What they don’t know is that we coaches all talk to each other, and we know the truth.”

She added: “We will call the other coach and ask, ‘Hey, did you offer that kid a full ride?’ When the answer is no, that kid might have lost the interest of two coaches.” 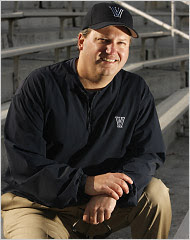 Godri said parents sometimes are misled by advisers who use the high-profile sports of football or basketball as a model for how to play the recruiting game. That is a mistake, Godri said, because the money in the nonrevenue sports is limited.

“The first thing people have to understand is that they are probably not going to recoup the money they’ve already spent on their kid’s athletic career,” Godri said. “But that’s what they are told. People get exploited. I wish people would relax and talk frankly to coaches. I’d tell them to lower their expectations, and everything will probably work out fine for all concerned.”

At the same time, the coaches concede that there is a competitive nature to the recruiting system and that they are not above using tactics to sway or hurry high school athletes in their decision-making.

“I think all the women’s sports have learned from the men’s sports, and right or wrong, we now do some of the things they do,” Ciarrocca said.

For example, if she is looking for a goalie, she might bring to campus each of her top three potential recruits at the position in the space of a few days. She said she would tell them that there were three players, that all three had been on campus recently and that they had a week to decide whether to attend Delaware. The first player to commit gets the scholarship money. The others do not.

“I’ve waited patiently in the past,” Ciarrocca said, “and lost all three.”

Coaches said the rules of this recruiting engagement were understood by anyone who had been in the game before. That is why coaches say they are happiest when they make their first call to a recruit’s home and find out the object of their attention had an older sibling who was recruited by colleges.

“Those people understand the landscape,” Milhous said. “If it’s the oldest child, I know it’s going to be harder.”

Among the principal things families do not know, the coaches said, is that there is a lot more money available outside athletics in the form of grants, loans and other institutional aid. In many cases, the athletic aid will be a piece of the financial package.

“The athletic money can also increase over time, because a good 17-year-old player can grow into a great 19-year-old player, and just about any coach will want to recognize that and keep the player happy,” said Godri, who has had two recent graduates drafted in the second round of Major League Baseball’s amateur draft.

For that reason, most coaches treat their pool of scholarship money as a reserve that must be strategically invested like a stock portfolio. And like a stock plan, it can be drastically affected by unforeseen outside forces — in this case, injuries and academic ineligibility. Other factors are the attrition of graduation and an always volatile position depth chart.

“Sometimes you have to try to predict the future, and if you think it’s easy, you’ve never done it,” Godri said. “This is why when a parent says to me, ‘You must have more money,’ I can say with a clear conscience, ‘There ain’t no more money.’ ”

Every coach interviewed said the battle over scholarship dollars would go more smoothly if parents and athletes did their homework and knew how few full scholarships the N.C.A.A. allowed in each sport (11.7 for baseball, 12 for field hockey, for example) and how few Division I institutions actually funded sports to those levels (far less than half). Most said there was an overemphasis on the potential financial benefit of a child’s athletic success.

“What they should be doing is attending the games of a college they are considering,” Milhous said. “Go sit with the parents of the current players. That will tell you everything. By the end of the game, they’ll know everything — good or bad. And that’s what really matters.

“But people tend to just focus on the money. They chase the scholarship and I’ve had several families come back to me a year or two later and say, ‘Chasing the money was a mistake.’ It sounds like a cliché, but there’s a lot more to being a happy college athlete than how much money you get. The money alone won’t make you happy.”


Griffin Palmer contributed reporting.
Posted by jtf at 9:08 AM