Bridging Eras: What Palmer Did, Woods Is Doing 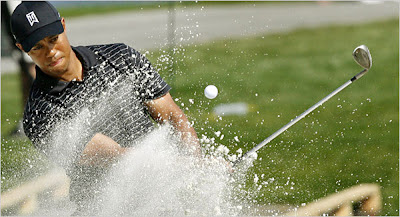 Hans Deryk/Reuters
Tiger Woods, during a pro-am event Wednesday, is a driving force for TV ratings for PGA Tour events.

ORLANDO, Fla. — To arrive at golf’s present requires a stroll through its past, a walk to remember just how closely linked the game’s eras and stars are.

The Arnold Palmer whose 62 career victories were passed by Tiger Woods two weeks ago can best be recognized today on flickering newsreels and in black-and-white photographs, frozen in time. Whippet-waisted, with forearms like a stevedore’s, Palmer grins from the walls of a special MasterCard exhibition at the entrance to Bay Hill, through which thousands of fans will pass this week on their way to see Woods, Phil Mickelson, Vijay Singh and other current golf stars compete at the Arnold Palmer Invitational.

To see Palmer as he was then, with his arms draped around the 1955 Canadian Open trophy after his first professional victory, or punching the air with an exuberant fist pump after his last in 1973, is to grasp how much he and Woods share in common as golfers, influencers and global ambassadors of the game.

Although Woods’s overall game is most often compared to that of Jack Nicklaus, there are some stylistic elements of the hard-charging, risk-taking Palmer in it. Woods’s perilous shot to the right of the pin on No. 17 at the TPC at Sawgrass in his first United States Amateur victory in 1994 and his 6-iron from a fairway bunker 218 yards over water at the pin to lock up the 2000 Canadian Open spring to mind.

Those shots, the birdie putts that followed and Woods’s signature fist pump — much like the 1973 version Palmer did during his fifth victory at the Bob Hope Desert Classic — are bridges across eras.

“I always remember Arnold being so aggressive and going after a lot of shots that most players would not try,” Woods said. “You know, that’s basically what his career was built upon. It also cost him some major championships. But he probably would not have won some majors if he did not play that way.”

Like the United States Open at Cherry Hills Country Club in Denver in 1960, when Palmer entered the final round seven strokes off the lead and drove the first green en route to a 65 that won the tournament. 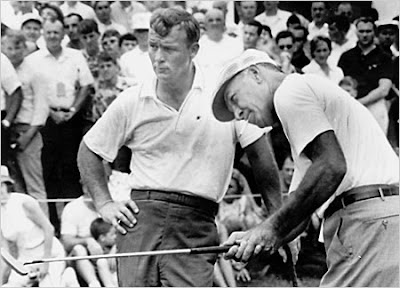 United Press International
Arnold Palmer, left, who has served as a role model and ambassador for golf, with his fellow great Ben Hogan in 1965.

It was then that the Palmer phenomenon was in full flower, when his twisting body leans and expressive face told television viewers exactly where his tee shots were headed — even on the 24-inch black-and-white screens of the era. Then, Palmer and televised golf were a happy marriage of a new star and a new stage. Now, the athletic power and grace of Woods drives golf TV ratings like no one else.

And at the live gate, no golfers in the last 50 years drew crowds like Palmer did and Woods does. Arnie’s Army, the throngs of near-fanatical Palmer followers, first lined the fairways at Augusta National, and his personal wall of fans generated some generous bounces for the man known as the King. Today’s tournament directors see a bounce of a different kind from Woods — more than a 25 percent rise in ticket sales when he plays.

As much as Woods’s playing goals were influenced by his desire to eclipse Nicklaus’s victory totals, he also tried to learn from and emulate Palmer’s impact on the game as a role model and ambassador.

“We all try and do that,” Woods said. “He’s promoted the game all around the world. He’s bent over backwards to make the game better, and he has. We would not have had the growth in our sport without him. Without Arnold Palmer, we would not be playing for all the things that we are able to play for now.”

Palmer has a similar level of appreciation for what Woods has accomplished, and what he believes he will accomplish, in the game. He thinks Woods could achieve his stated goal of winning the Grand Slam this year — “I can see Tiger doing it,” he said — and is clearly impressed by his run of victories dating to last season.

“I think right now he has got the game by the neck and he’s choking it — and he should,” Palmer said. “His game is obviously responding to his commands, and I think that’s what it’s going to take to do the things that we’re talking about.”

Palmer, 78, will return to Augusta National in the spring to hit the ceremonial opening drive for the Masters tournament, and he may even consider playing in the annual par-3 contest on Wednesday of tournament week. This year will mark the 50th anniversary of his first of four Masters victories, and it will also be the year Gary Player will play in his 51st consecutive Masters, surpassing Palmer’s record of 50, set in 2004.

Looking back, the Arnold Palmer of today does not seem to care much about either mark. His legacy is secure, his tournament is in its 30th year and his smile is that of a grandfather who enjoys watching younger players go after it like he once did. Asked whether he believed he would be remembered more for the way he played golf or the way he carried himself, he leaned forward in his chair.

“Well, you know, I’m pleased that I was able to do what I did from a golfing standpoint,” he said. “But I would like to think that I left them more than just that.”
Posted by jtf at 10:56 AM