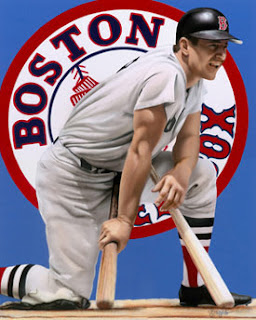 By The Associated Press
Tuesday, September 18, 2007

BOSTON - Carl Yastrzemski didn't know he made history until he read about it in the newspaper the next day.

The son of a Long Island potato farmer was too wrapped up in the tight 1967 pennant race, strange territory for a Red Sox team that finished ninth in the AL the previous two seasons.

So when he turned to an inside page of his Monday paper -- the headline about Boston's first pennant in 21 years was on Page 1 -- he saw the news: Yaz wins Triple Crown.

"I had no reaction," he says now, 40 years later. "I was ecstatic about the World Series and the pennant."

With each passing season, the scope of his accomplishment grows. Through those 40 years not one player has combined the power and productivity to match his feat -- leading the league in homers, RBIs and batting average.

Alex Rodriguez has topped the AL in all three categories, but never in the same year. The same with Barry Bonds in the NL. David Ortiz was first in the AL in homers and RBIs last season, but hit just .287.

With fewer than two weeks left in this season, A-Rod is a shoo-in for the AL home run and RBI titles but has no shot at the batting crown.

Only 10 players have won the Triple Crown. Ted Williams and Rogers Hornsby did it twice. Mickey Mantle won it in 1956 and Frank Robinson in 1966.

Babe Ruth? Close. He led the AL in batting average and homers in 1924 but was second in RBIs with 121, eight behind Goose Goslin.

How about the minor league infielder who switched to left field to replace Williams but who hit only .266 as a rookie in 1961 before making the Hall of Fame in his first year of eligibility in 1989?

And he's proud of what he did.

"Oh, without a doubt. Forty years is a long time," he said. "If we didn't have that intense pennant race and I thought about winning the Triple Crown, I probably wouldn't have won it. When you think about hitting a home run, you usually don't do it."

Over the last 44 games, the Red Sox were never more than 1 1/2 games ahead or behind. 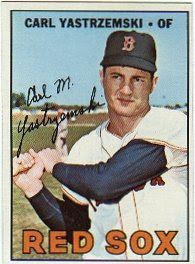 Baseball is a different game today from the one in 1967. There are 30 teams instead of 20. The designated hitter adds a batter to the lineup, often a slugger. Strike zones were larger, favoring batters like Yastrzemski, who could hit a variety of pitches.

The mound was higher, making pitchers more dominant but not affecting Yastrzemski as much because he was a good hitter of fastballs thrown over the top.

"I could hit the high fastball," he said.

And he could do so much more. Besides the Triple Crown, he led the AL in runs, hits and total bases. He won a Gold Glove and made the Red Sox winners after eight straight seasons with losing records and poor attendance.

"He's still the best left fielder I've ever seen," said Ken Harrelson, a teammate in 1967 and now a Chicago White Sox broadcaster. "I call him 'The Renaissance Man' because he was definitely the renaissance of baseball in New England."

Yastrzemski hit .326 for his second batting crown, tied Harmon Killebrew of Minnesota with 44 homers -- each connected in the next-to-last game but Killebrew walked 40 more times that season -- and drove in 121 runs.

"I had no awareness whatsoever" of the Triple Crown, he said. "I was so focused on beating Minnesota those two games."

The Red Sox achieved "The Impossible Dream," the name given to their pennant quest, but lost the World Series in seven games to St. Louis.

That summer, Tom Werner arrived in Cambridge around Labor Day for his freshman year at Harvard. Now a Red Sox owner, he listened to the last two regular-season games on radio.

The Red Sox began that Saturday a game behind Minnesota then beat the Twins twice. But there was still a chance they would face a one-game playoff with Detroit. But the Tigers lost the second game of a doubleheader later that Sunday in Anaheim.

Yastrzemski went 7-for-8 in those two games.

"If there was one situation that you could pick anyone at anytime to bat for you, I would pick Yaz in '67," said Werner, who sneaked into one of the World Series games with his college roommate.

Harrelson had a much better view of the two games against Minnesota -- from the on-deck circle as the cleanup hitter. Ten days after Tony Conigliaro was beaned on Aug. 18, Boston signed him following his release by the Kansas City Athletics.

"I played nine years in the big leagues," Harrelson said. "I've broadcast over 4,000 games. The best clutch hitter I've ever seen in my life is Yastrzemski. He was just phenomenal."

Rico Petrocelli played shortstop on the team that finished 40 games out of first place in 1965 and drew fewer than the 5,933 announced fans for its last game -- and 100th loss. He was still there when 35,770 watched Yastrzemski in the finale two years later.

"His attitude every game was just like a football linebacker trying to knock the quarterback down," Petrocelli said. "That's the type of aggressiveness he had. He swung hard and he ran the bases hard, just incredible all year long."

"Actually, for him that year it ought to be a quadruple crown," said Mike Andrews, a rookie second baseman in 1967. "His defense should have been rated in there somehow."

In the final game, Boston trailed 2-0 in the bottom of the sixth. Then Yastrzemski came to the plate with the bases loaded and tied the game with a single to center. The Red Sox won 5-2.

"Without Yaz," Petrocelli said, "there's no way we could have won it." 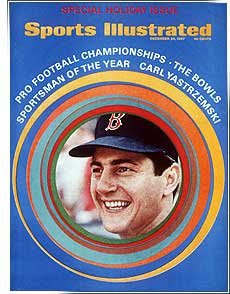 Yet it was Jim Lonborg, who had pitched a complete game, whom the fans surrounded and lifted off the Fenway Park turf -- a burial ground of Red Sox hopes for so many seasons.

Yastrzemski left the field with a Triple Crown he didn't know he'd won.

"We would play bridge together during road trips that summer. I never even talked about hitting with Yaz," Lonborg said.

"He won the Triple Crown when the heat was on," Harrelson said. "He did it in the midst of probably the greatest pennant race in the history of the game. That'll tell you everything you have to know about him."

Yastrzemski had hit just .278 with 16 homers in 1966, but the following winter he worked out daily under Gene Berde, "a tough Hungarian," he said. "The first time I worked out with him he said, 'You call yourself an athlete?'"

But what could Yaz do? He had spent previous offseasons finishing up his degree work at Salem State and working out when he could.

"Now it's different. Players don't need jobs," Yastrzemski said. "When I won my first batting title in '63, I had to hold out in '64. Mike Higgins was the general manager. He said, 'Frank Malzone is the highest paid player. You can't get more than him.' I said, 'Well, give him a raise,'"

The player Yastrzemski thinks can be the next Triple Crown winner, Rodriguez, is in the seventh season of a $252 million, 10-year contract.

He and Yastrzemski belong to the same golf club in Boca Raton, Fla. But just as Yaz was in the dark the day of his amazing achievement, Rodriguez didn't know just how long ago it was.