Yankees stand 1.5 back of Sox 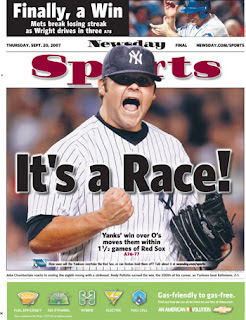 Andy Pettitte pitched into the eighth inning and Doug Mientkiewicz came up with another big hit in a 2-1 win to sweep Baltimore.

Andy Pettitte gave the Yankees just the stingy outing they needed Wednesday night as they chase down the Red Sox in the American League East.

The Yankees beat the Orioles, 2-1, and picked up their third game in three days on the Red Sox, trimming Boston's lead in the AL East to 1½ games. With Mariano Rivera on the mound and two outs and two strikes in the ninth, the crowd erupted in applause -- a score from the Red Sox game had just flashed on the scoreboard, with Boston trailing the Blue Jays 6-1.

With the Yankees' bats struggling against the Orioles' Brian Burres, Pettitte pitched a gem in earning the 200th win of his 13-year career. The lefty gave up one run in 72/3 innings, and walked off the mound to a rousing ovation from the crowd of 53,851. Pettitte lifted his cap as he stepped into the dugout.

And just as the applause began to die down, the crowd got a second wind as phenom Joba Chamberlain entered the game in his first mid-inning appearance. Chamberlain struck out Melvin Mora swinging on four pitches for the final out of the eighth.

Rivera had a shaky ninth, loading the bases on a double and two walks. But he struck out Scott Moore looking to end the game. 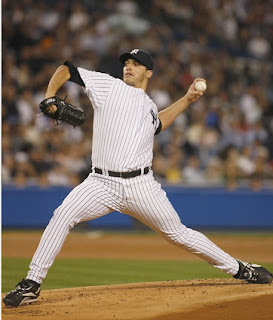 Before Wednesday night's game, manager Joe Torre said Pettitte was anxious to get back. In his previous start, at Boston Friday, he had his shortest outing since the All-Star break, giving up five runs in only four innings. The Yankees rallied to win that game, but Pettitte was disappointed in his effort.

Pettitte (14-8) bounced back in a big way Wednesday night. He allowed seven hits and two walks, striking out four. The Yankees are 9-1 in his last 10 starts.

In the first four innings, Pettitte faced one batter above the minimum. He allowed four baserunners in that time, but three were canceled out by defensive plays. Aubrey Huff reached on a second-inning single but was caught stealing on a throw from Jorge Posada to Robinson Cano. In both the second and third innings, a double play helped Pettitte out.

The Orioles' only run came in the sixth. Pettitte issued a one-out walk to Brian Roberts, who stole both second and third. Roberts scored on a single up the middle by Mora. Alex Rodriguez bobbled Miguel Tejada's hard grounder but recovered to throw him out at first. Then Melky Cabrera ran down Nick Markakis' fly ball to left-centerfield for the final out.

Rodriguez made a fantastic play for Pettitte's final out in the eighth, fielding a soft grounder by Roberts and throwing to Doug Mientkiewicz, who caught it while nearly doing the splits.

Although the Yankees' offense has been the best in the majors since the All-Star break, the starting pitching has been equally impressive lately. In the Yankees' last 14 games, their starters are 8-1 with a 2.50 ERA.

The Yankees pulled ahead 1-0 when Hideki Matsui hit a long home run to rightfield off Burres. Matsui has seven RBIs in seven games since breaking out of a 2-for-31 slump.

Their only other run came in the sixth when Mientkiewicz, who opened the inning with a single, scored on a two-out wild pitch.