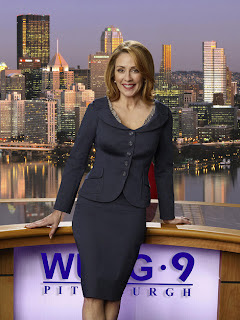 Patricia Heaton, veteran funny-woman, is coming back to TV in the role of anchorwoman Kelly Carr, alongside Kelsey Grammar in FOX’s Back To You. You already know Heaton for her tenure on Everybody Loves Raymond, as Debra Barone, the sassy, long-suffering wife of Ray Barone, the show’s namesake. Heaton had a highly successful 9-season run as Debra, a role for which she won two Emmys.

Looking tiny in a gold dress, Patricia took time from a full day of promoting her new show to meet me in the lounge of the Beverly Hilton in July. After she graciously posed for pictures with lucky fans, we sat down and discussed her new role, her true feminism, and the experience of being pro-life in Hollywood.

Beginning with her new role, Heaton explained that her new character, Kelly Carr, is a news anchor in Pittsburgh. Slightly embittered, because she is forever overlooked in favor of her no-talent, narcissistic co-anchor (Kelsey Grammar’s Chuck Darling), Carr slogs away as a fixture in her small market anchor position. Meanwhile, Darling thrives in bigger and better markets. An unfortunate on-air tirade bumps Chuck back down to Pittsburgh, where Kelly greets him with on-air smiles, and off-air hostility. He’s surprised to find she’s had a child while he was away, rumored to be the product of a sperm bank. The secret truth, though, is that she had an unplanned pregnancy.

The storyline, because it involves single-motherhood, provides ample opportunity for a variety of comedic and dramatic nuances. Heaton points out that “As an actor, you ask ‘Are there at least five years of exploration with these characters?’ Having her be a single mom adds a whole level of opportunity to explore situations she gets herself into because she’s a single mom.”

Moreover, as the national spokeswoman for Feminists for Life, a pro-life, pro-woman organization, Heaton has special affinity for her character. Carr is a woman who refused to choose between her child and her career, and as a result found unexpected joy in an unexpected pregnancy. The choice made by Carr as a single mother, gives voice to an under-represented perspective on women’s issues, both in Hollywood and elsewhere. As Heaton points out, the so-called modern feminists get it backwards:

The feminists of the ‘60s and ‘70s felt that in order to promote the agenda of equality in the workplace, which I believe in, that they had to denigrate this other very important aspect of being a woman, which is being a mother and bearing children. To even have to compare these two things is ridiculous. I think a mistake these feminists made was that you had to be more like a man to compete in the world. What that leads to is woman having abortions in order to compete. And that’s not really having a choice. So, that’s a big mistake, and you have to spend a lot of time undoing that notion. 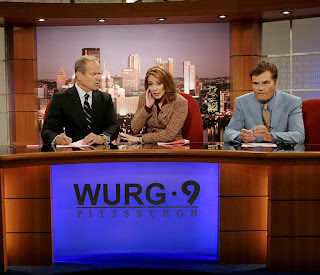 While the philosophical debate rages, real women are making progress—even in the world of entertainment—according to Heaton. “I think one thing that Hollywood has done, which has been great for pregnant women, is that you see a lot of actresses working and still being able to have their children. I think that’s very important to see.”

Ultimately, Heaton believes that these are issues involving basic rights. At one point during our talk, she very passionately urged that, “Women need to protect their right to bear children without harassment from boyfriends, or parents, or employers, or professors, and no one should be able to tell women that they cannot bear their children, or that they should have to sacrifice their child in order to accomplish other things in life.”

Earlier in the day, at the press conference for Back to You, a TV reporter had asked, “Kelsey, you've expressed an interest in running for politics as a Republican. Patricia, you cut the anti-stem-cell ad. Is this what happens in Hollywood, if you're two of the only outspoken people of a certain kind; you end up on a show together?” The reporter’s question seemed to suppose some sort of back room, super secret, and wildly ineffective Right-of-Center cabal. Laughing over the question later, I asked Heaton if she experienced any push-back for her political stance. She said it’s been more blown up in the media, and that it’s not something that affects her daily life:

Perhaps there’s some group secretly meeting in a room somewhere plotting my demise. If so, I’m not aware of it. But I’ve just got probably the greatest gig that anybody could get with this show. Somebody out there likes me.

In the end, Heaton is excited about the opportunity to create truthful moments and make people laugh. “Inherent in any good sitcom, you have to care about the characters, and they have to seem like real people with real problems. Otherwise, you get just a bunch of punch lines. To be able to turn on a show and see characters with some of the same struggles and get a laugh out of it is important. I’m not saying we’re curing cancer or anything. But there’s a relief, a balm in humor.”

Turns out being professional, having an impeccable sense of comedic timing, and conveying heart along with sarcastic wit, trump off-camera politics.

Those two Emmys on her mantle don’t hurt either.

Rebecca Cusey is a writer in Washington, D.C.
Posted by jtf at 10:46 AM