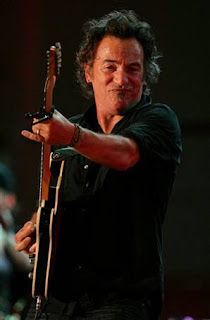 [This is a pretty lightweight review compared to the others that were posted...but it provides links to some good pics and articles of interest. In fact, I can't imagine a dumber summation than the one that kicks off the review. - jtf]

After repeated listening to Bruce Springsteen’s “Magic,” the only conclusion I can come up with is that Springsteen — after years of writing message albums — yearns to rock for the sole purpose of having a good time with his best friends.

And while he certainly had a great experience playing with the Seeger Sessions Band, it becomes easy to realize that Springsteen remains in his element with his old chums: the venerable E Street Band. Interestingly, the cover of “Magic” has no mentions of his E Street companions; but make no mistake, this is a full-blown band album that would’ve fit comfortably between “The River” and “Born in the USA.”

Right off the bat with “Radio Nowhere,” Springsteen summons all the power of the E Streeters, including right-hand man Steve Van Zandt on guitar and Clarence “Big Man” Clemons on sax. It’s an up-tempo number with catchy hooks (“I just want to hear some rhythm”) that feels similar in tone “57 Channels and Nothing On,” each lamenting on the loss of connection.

There’s doesn’t seem to be a strong and unified underlying theme of “Magic,” yet there are several songs that delve into mistrust and the darkness that lies ahead. “You’ll be Coming Down,” for example, reiterates how life might be OK now, but just give it time. It’s guaranteed to all fall apart, just wait and see.

“Girls in Their Summer Clothes” is, by far, the most breezy number on the album, one that immediately puts Springsteen back on the boardwalk of the Jersey shore, with little more to do than watch and ogle at the girls who walk by.

Breezes, bicycles, all-night diners, neon signs all bring about a visual landscape that brings both Springsteen and his listeners back to their youth. In feels like a perfect “River” tune, back when cars and girls were still Springsteen’s top priority and a beautiful girl could make all the difference in the world: “She went away / She cut me like a knife / Hello, beautiful thing / Baby, you could save my life.”

If in the first half of the albums the songs may sound a bit similar on a first listen, it’s at “Girls” where “Magic” starts to really hit its stride. Next comes “I’ll Work for Your Love,” which begins with Roy Bittan on the piano, a sound Springsteen fans may liken to such staples as “Backstreets” and “Jungleland.”

Where “Girls” is more of a dreamlike vision — where a young Springsteen would watch the beautiful ladies go by and hoping one would someday be his wife — “I’ll Work for Your Love,” is a much older and mature songwriter who realizes the sacrifices it takes to not only be in love but to keep a marriage and/or relationship together.

The mesmerizing title track is where Springsteen’s aforementioned dark side comes to fruition. Whether he was emotionally scarred by a magician as a young boy, or he just has it out for them, Springsteen sees these tricksters as deceitful and reprehensible, their entertainment value be damned.

From 1973's "Greetings from Asbury Park" to his newest album, "Magic," Bruce Springsteen and the E Street Band have continued to define American rock and roll.With lyrics such as “I got a shiny saw blade / All I need’s a volunteer / I’ll cut you in half / While you’re smilin’ ear to ear” makes it very clear what Springsteen thinks of these slight-of-hand artists. Of course, he could be a big fan of magicians and is just toying with us.

The most political song is clearly “Last to Die,” an ode to what John Kerry said as American troops were leaving Vietnam. Springsteen toured in 2004 in support of Kerry’s bid for the presidency and the two have clearly made a connection that has lasted long after the election. It’s another hard rocker that feels urgent in Springsteen’s deep-throated vocals.

Jon Landau, Springsteen’s long time manager, says “Long Walk Home,” about a return to where one grew up, sums up the disc more than anything else on “Magic.” And for a closer, the slow burn of “Devil’s Arcade” feels like a caged tiger waiting to burst through its bar.

Night of ‘Magic’ for Springsteen fans in Jersey

Confessions of a Springsteen addict

TODAY: Submit your questions for the Boss

Think you look like Bruce? Send us your photo

Then there’s “Terry’s Song,” recorded several months after the rest of “Magic” was already completed. Dedicated to Terry Magovern, his friend of over 30 years who passed away this summer, Springsteen whipped up the song only a day before the funeral, and it turns out to be an instant classic.

We should all be so lucky to have someone write something so touching and heartfelt about ourselves for all our friends and loved ones to hear.