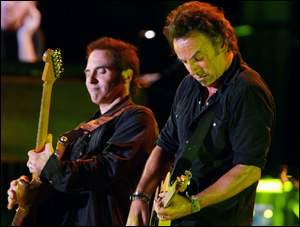 WARM-UP ACT: As they've done before, Bruce Springsteen and the E Street Band introduce their latest work in Asbury Park

Bruce Springsteen and the E Street Band performed a little prestidigitation Monday night, bringing a sold-out crowd at Convention Hall in Asbury Park to its feet.

Fans yelled "Happy Birthday!" to Springsteen — Sunday was his 58th birthday — as he and the band launched into "Radio Nowhere," the first single from the new album "Magic."

This was the first of two rehearsal shows at the 3,600-seat venue. The second show is tonight.

The early part of the set featured music from the new album, but also reached back to songs from throughout the band's catalog.

"Radio Nowhere" was followed by "No Surrender," a song from the "Born In The U.S.A." album.

Fans reacted especially well to older songs such as "Something in the Night" and "Night."

Other songs from the new work, which appeared early in the set, included "Gypsy Biker" and the Beach Boys-tinged "Girls In Their Summer Clothes."

Springsteen welcomed fans and said: "We're gonna run through a bunch of things; there may be some mistakes, but I doubt it." Indeed, the show went off as smoothly as any Giants Stadium extravaganza, and Springsteen seemed pleased, saying at the end: "This is our first go-round, so thanks for helping us out, and we'll be seeing you."

Better than the Garden

This concert, along with the upcoming album and tour, is being met with a lot of anticipation.
For Patti Kofler of Brick, it was a huge thrill.

"I've been a Springsteen fan since the early '80s," she said. "And this is the first time I've gotten tickets. This is the best place to see them play. Better here than a huge place like Madison Square Garden."

Part of the joy of a Springsteen concert is singing along to old favorites. But these shows were expected to have a lot of new music from "Magic," set to be released on Oct. 2.

"I've got mixed emotions about that," said Carl Fuhring of Ocean Township. "I like the old stuff. But then again, the old stuff was new once. And there's no doubt in my mind that I'm going to like the new stuff."

Nostalgia also had something to do with how he was feeling.

"I played basketball here for Neptune High School in 1962," he said. And he was glad to be back after so many years, he added.

The tickets for these two shows sold out in minutes when they went on sale Friday. But that didn't stop Alison and David Bottimore from coming anyway.

"We drove 200 miles from Fairfax, Virginia, without a ticket," said Alison.

She and her husband hoped to get tickets that would go on sale just hours before the concert began.

"It was very organized," she said. "We were given wristbands and, if and when tickets go on sale, we'll be fourth in line to get them."

There were approximately 300 people waiting in line behind her.

"Even if we don't get in," she said, "we'll listen from the beach before we head home. It's Bruce. It's worth it."