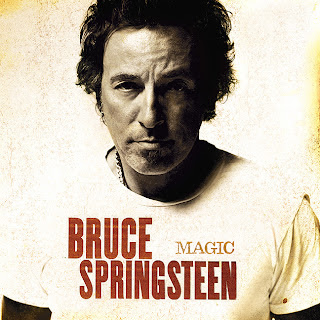 “The great romantic makes an album about working-class defeat – and, leaving most of his innocence hanging in the air, comes away ready for a long, uncertain fight against cynicism.” – Greil Marcus on Darkness on the Edge of Town, from Stranded, 1979.


Bruce Springsteen looks like a weary man on the cover of Magic, his new album with the E Street Band. But there’s also a look of defiance in his eyes, and it seems as though it’s defiance that Springsteen has tapped into to make Magic his best album in twenty years, a luminous and often gorgeous collection of songs, that typical of Springsteen, are filled with a sense of defeat, alienation, dread, anger and the residue of betrayals both personal and political, while also conveying a spirit of steely determination to carry on regardless.


Given the events of these past few years, it would be impossible to expect Springsteen not to have experienced both weariness and a deep sense of defeat. The Iraq war, which Springsteen publicly opposed from the stage months before Bush gave the orders to invade (Introducing “Born In The U.S.A." in the fall of 2002, he occasionally said, “I don’t want to have to write this song again.”), has entangled this country into a quagmire with no end in sight, with unimaginable costs of blood and treasure. And Springsteen no doubt remembers that it is a war that at its outset, a huge majority of the country supported (most notably Congress and the mainstream media) with little or no hesitation or qualification.

Springsteen’s endorsement and campaigning for John Kerry in 2004 on the Vote For Change tour failed in its intention to remove the president - “You voted and you didn’t change,” was how Springsteen explained it at a Devils & Dust performance in Cleveland in the spring of 2005. And Springsteen’s 2006 tour with the Seeger Sessions band played to half empty arenas in several U.S. cities, despite the shows featuring some of the most enervating music of the man’s life, possibly calling into question for Springsteen the relationship between he and his fans.


Springsteen has always sought to create consensus through his music – he is a uniter, bringing together multitudes of people who on the surface, have little in common other than a reaction to his music. But the divide between his ideals of America and the reality of America in 2007 feels more like a chasm. And so to attempt to bridge that enormous divide he is back with the band, and while a cynic might say that he needs them commercially, what seems more likely is that he needs them personally - to combat his own sense of isolation by once again reconvening the best community he’s known and seeing what possibilities can be created by bringing it face to face with an audience. 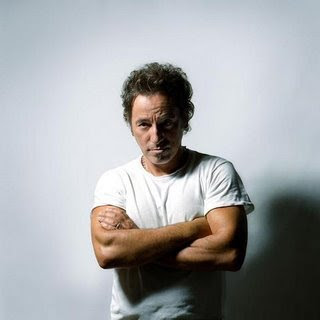 Magic succeeds brilliantly because for the first time since perhaps Born In The U.S.A., Springsteen has paid as much attention to the melodies, hooks and sounds on the album as he has to the lyrics. Several of the songs – “Livin’ In The Future,” “Girls In Their Summer Clothes,” “You’ll Be Coming Down” and “I’ll Work For Your Love” are simply the some of the most enjoyable sounding songs Springsteen has ever recorded, downright gorgeous in both their melodies and arrangements. Producer Brendan O’Brien continues to create an updated version of the E Street sound – Roy Bittan’s piano shines as does Danny Federici’s organ and glockenspiel - but as on The Rising, the guitars are up front leading the band, sounding vaguely reminiscent of the 60’s British Invasion bands that Springsteen grew up listening to (and that Steven Van Zandt continues to lionize on his radio show). Clarence Clemons’ solos sometimes feel somewhat less than essential, but when they come in, like they do in “Livin’ In The Future” and "Long Walk Home," they occur as the sound of a beloved friend, one that you’re simply happy and grateful to know is still around. Garry Tallent’s bass is fluid as always and Max Weinberg’s drums, while still powerful, sound far lighter on their feet than they did on The Rising, which helps matters considerably.


Springsteen is universally and justifiably recognized as a great performer and lyricist, but he’s woefully underrated as a singer, and on Magic, his vocals shine. In the past fifteen years, Springsteen has substantially broadened the range of his voice, creating a myriad of options for his own phrasing, and on Magic, it seems like he utilizes them all. Whether singing plaintively or with a full-throated passion, Springsteen remains one of the few singers in popular music that has the ability to convey a multitude of emotional dimension within the same song, like in the mournful determination of “Long Walk Home,” the wistfulness of “Girls In Their Summer Clothes” and the humor and delight in the face of calamity of “Livin’ In The Future.”


The war in Iraq, while never addressed explicitly, can be felt all over the album. Springsteen, never interested in ideology or polemics, instead delves into the cost of the war in human terms – of death, sorrow, anger and cynicism. “Last To Die,” an angry lament, quotes the young John Kerry’s testimony during Vietnam (“How do you ask a man to be the last to die for a mistake?”) and asks the question anew, while making his statement about our current leadership: “The wise men were all fools.” “Magic” occurs as both prophecy and warning: “Now there’s a fire down below/That is coming up here/So leave everything you know/Carry only what you fear/On the road the sun is sinking low/Bodies hanging in the trees/This is what will be.” And in “Devils Arcade,” the most explicitly “Iraq” song on the album, Springsteen looks at it with a heartbroken eye: “You said heroes are needed, so heroes get made/Somebody made a bet, somebody paid/The cool desert morning then nothin' to save/Just metal and plastic where your body caved.”


Magic is not a flawless album. “Radio Nowhere,” the album’s opener and first single, is a less than thrilling rocker, and on occasion, the album feels a little too glossy, missing the grittiness that is a hallmark of some of Springsteen finest work. But these are minor quibbles.


Magic is an album that ranks among Springsteen’s greatest music – and whether you listen to it for fun or hunker down with the lyrics and pore over every detail, what emerges is both the brilliance and commitment of an artist who continues to grow musically and emotionally; an artist whose values remain intact and who continues to fight the good fight - even in the face of these badlands.

Nice review. I agree that it's a great album.