Michelle Malkin: The Martyrs No One Cares About 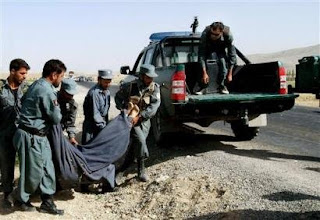 The body of Shim Sung-min, 29, one of the South Korean hostages is carried to load in the back of a vehicle by policemen after he was killed by the Taliban militants in Ghazni province, west of Kabul, Afghanistan on Tuesday, July 31, 2007. Police in central Afghanistan at daybreak Tuesday discovered the body of a second South Korean hostage slain by the Taliban, officials said.

The blood of innocent Christian missionaries spills on Afghan sands. The world watches and yawns. The United Nations offers nothing more than a formal expression of "concern." Where is the global uproar over the human rights abuses unfolding before our eyes?

For two weeks, a group of South Korean Christians has been held hostage by Taliban thugs in Afghanistan. This is the largest group of foreign hostages taken in Afghanistan since Operation Enduring Freedom began in 2001. What was their offense? Were they smuggling arms into the country? No. Inciting violence? No. They were peaceful believers in Christ on short-term medical and humanitarian missions. Seventeen of the 23 hostages are females. Most of them are nurses who provide social services and relief.

Over the past few days, the bloodthirsty jihadists have demanded that South Korea immediately withdraw troops from the Middle East, pay ransom and trade the civilian missionaries for imprisoned Taliban fighters. The Taliban leaders have made good on threats to kill the kidnapped Christians while Afghan officials plead fecklessly that their monstrous behavior is "un-Islamic."

Two men, 29-year-old Shim Sung-min and 42-year-old Pastor Bae Hyeong-gyu, have already been shot to death and dumped in the name of Allah. Bae was a married father with a 9-year-old daughter. According to Korean media, he was from a devout Christian family from the island province of Jeju. He helped found the Saemmul Church south of Seoul, which sent the volunteers to Afghanistan.

Across Asia, media coverage is 24/7. Strangers have held nightly prayer vigils. But the human rights crowd in America has been largely AWOL. And so has most of our mainstream media. Among some of the secular elite, no doubt, is a blame-the-victim apathy: The missionaries deserved what they got. What were they thinking bringing their message of faith to a war zone? Didn't they know they were sitting ducks for Muslim head-choppers whose idea of evangelism is "convert or die"?

I noted the media shoulder-shrugging about jihadist targeting of Christian missionaries five years ago during the kidnapping and murder of American Christian missionaries Martin and Gracia Burnham in the Philippines. The silence is rooted in viewing committed Christians as alien others. At best, there is a collective callousness. At worst, there is outright contempt -- from Ted Turner's reference to Catholics as "Jesus freaks" to CBS producer Roxanne Russell's casual insult of former GOP presidential candidate Gary Bauer as "the little nut from the Christian group" to the mockery of GOP presidential candidate Mitt Romney's Mormon faith.

Curiously, those who argue that we need to "understand" Islamic terrorists demonstrate little effort to "understand" the Christian evangelical missionaries who risk their lives to spread the gospel -- not by sword, but through acts of compassion, healing and education. An estimated 16,000 Korean mission workers risk their lives across the globe -- from Africa to the Middle East, China and North Korea.

These are true practitioners of a religion of peace, not the hate-mongers with bombs and AK-47s strapped to their chests who slay instead of pray their way to martyrdom.
Posted by jtf at 1:24 PM