Even in early days, Ripken and Gwynn seemed bound for Cooperstown 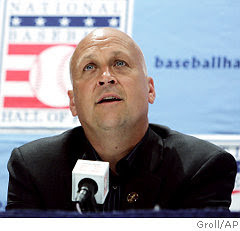 Tony Gwynn and Cal Ripken (below) talk to the media yesterday.

COOPERSTOWN - When it comes to the great ones, there are almost always early signs. Cal Ripken and Tony Gwynn, who will be inducted into the Hall of Fame today, are no exceptions.

Longtime Baltimore Orioles manager Earl Weaver, a Hall of Famer himself, saw enough of Ripken fielding ground balls from his dad, Cal Sr., an Oriole coach, all those years leading up to his arrival in Baltimore at the tail end of 1981 to convince him he could handle the shortstop job and lead the infield as a rookie the following season.

At the same time, Jack McKeon, a hardened baseball man and astute judge of talent, needed only one look at Gwynn's fluid swing in an exhibition game between Gwynn's San Diego State Aztecs and the Padres in 1981 to convince him San Diego needed to re-evaluate its draft priorities that spring.

When Cal Ripken reported to the Orioles' spring training camp in 1982 he was a gangly 6-4 whose combined power numbers (48 homers, 153 RBI) the previous two minor league seasons had prompted a decision by the team's scouts and front office to move him from shortstop to third base. But as Weaver tells it, he believed the others were being shortsighted, not to mention unfair to Ripken.

"In our meetings the previous fall, the discussion was to trade our third baseman, Doug DeCinces, and move Cal over there. In their minds, he was too big for shortstop and his power would be better suited at third," Weaver was saying this past week. "But I couldn't understand that logic. Growing up in the Cardinals' system, I'd seen Marty Marion, who was 6-2, and maybe the best defensive shortstop ever. I just felt Cal could give you the same offense at short and, at the same time, he knew the game inside-out. Growing up around our club with his dad, he knew my system, my cut-offs and relays. (Cal Sr.) had been teaching that in the minors and Cal was always listening."

But as Weaver related, he was overruled in that meeting and, a month later, the Orioles traded DeCinces to the California Angels for a relief pitcher, Don Aase, with the understanding that Ripken would move to third and Bobby Bonner, another top prospect, would assume the shortstop job.

"Well, the season started and we got off slowly and neither Cal or Bonner were hitting," Weaver says. "Plus, my only veteran in the infield, (second baseman Rich) Dauer, wasn't really a take-charge guy. So I decided I was gonna satisfy my own feelings and satisfy myself that Cal couldn't be a shortstop. I knew he could take over and direct traffic so I made the move, benching Bonner and using Floyd Rayford at third base, and Cal began hitting. He wound up with 28 home runs and won the Rookie of the Year and the rest is history."

Ripken went on to hit 345 homers at shortstop, the most in history, and remained there for 14 seasons before finally moving over to third in 1997 while continuing on with his record 2,632 consecutive games played streak. In 1990, he made only three errors to achieve the highest one-season fielding pct. (.996) of any shortstop in history.

"If you ask me, Cal's defensive skills have not been properly recognized," Weaver says. "That year he made only three errors while leading the league in putouts and assists, to me, that's phenomenal. Looking back at those meetings in '81, I remember saying: 'If you take this kid off shortstop, you're taking his chance for the Hall of Fame away from him.' Turned out, Cal would have made it at any position."

In the spring of 1981, McKeon, then general manager of the San Diego Padres, was preparing for the annual June draft. In numerous meetings with his scouts it had been decided the Padres would take an outfielder, either Joe Carter of Wichita State or Kevin McReynolds from Arkansas, with their first-round pick. A few weeks before the draft, however, McKeon was watching an exhibition game between the Padres and the local college, San Diego State, when another outfielder caught his eye.

"I'd probably seen San Diego State 18-20 times and never saw Tony," McKeon says. "That's because he was playing basketball and didn't join the baseball team 'til late. (Shortstop) Bobby Meacham was the star of their team and a projected No. 1 pick by a lot of teams, not us because we had Ozzie Smith at the time.

"Anyway, I'm watching this game and here comes Tony who triples off Steve Mura his first time up, then doubles off (Juan) Eichelberger his next time up and both times runs the bases like he can see someone behind him. I turn to the (S.D.) athletic director sitting next to me and say: 'Who's this?' He says: 'That's Tony Gwynn. He plays basketball, too.' I told him: 'That may be, but he's the best player you got on this team.'"

McKeon gambled that few scouts had seen enough of Gwynn to make him a high pick in the draft. He went ahead and took McReynolds with his first-round pick (the sixth pick in the draft), after the Cubs had taken Carter four picks earlier. And with a compensation first-round pick at No. 26, McKeon took Miami (Fla.) catcher Frank Castro. Then, with his second-round pick, he took pitcher Bill Long out of Miami of Ohio. It was not until the third round and the 58th pick overall, that the Padres selected Gwynn.

"I had wanted to take him sooner," McKeon says, "but our scouts really liked Billy Long and since I hadn't seen Long, I had to go with them. Anyway, we took Gwynn and sent him to Walla Walla (Wash.) in the Rookie League where he hit .331 in his first 40 games and we moved him all the way up to Double-A where he hit .462 in his last 23 games. The next spring, we brought him to the big league camp and (Padres manager) Dick Williams wanted to keep him, but I felt he still needed a little more seasoning to work on the other parts of his game."

In McKeon's judgment, Gwynn, despite his natural hitting skills, is the consummate self-made player. An average outfielder with a below-average arm, he worked hours on his throwing with Padres minor league instructor Clyde McCullough and, within two years, was a Gold Glover. At the same time, he was determined to be a more proficient base-stealer after being caught 11 times in 25 attempts in 1985. The next year he was 37-for-46 and in 1987 he was 56-for-68. He would finish his career with 3,141 hits, 319 stolen bases and eight batting titles.

"Tony just had so much dedication and pride," McKeon says. "He did it all himself."

The same could be said for Ripken who, like Gwynn with McKeon, had an early believer in Weaver but still had to work long and hard to establish himself as a Hall of Fame shortstop.
Posted by jtf at 10:02 AM

hey! i'm going to cali this weekend and won't be back until september...here is the website i was talking about where i made extra summer cash. Later! the website is here