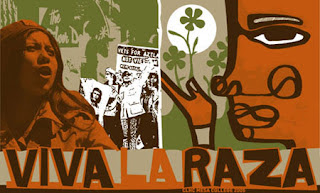 More Propaganda From The Treason Lobbyists At La Raza

In its latest assault on our sensibilities, the National Council of La Raza (i.e., “The Race”) alleges that the U.S. is drowning in “a wave of hate” aimed at Hispanics.

According to Cecilia Munoz, La Raza’s senior vice president of research, legislation and advocacy, if it weren’t for this massive surge of American hatred, the recent Comprehensive Immigration Reform proposal giving amnesty to millions of illegal aliens would have sailed through Congress
Said Munoz, referring to the radio talk shows she views as the main—but not the only—outlet for “hate”:

"That had an extraordinary impact in the Senate, and as a nation, I don't think we should be comfortable with the fact that the United States Senate responded to what was largely a wave of hate." [Hispanic Group Aims to Stop ‘Wave of Hate’” By Steven Dinan, Washington Times, July 22, 2007]

(Munoz was speaking at the same conference where Rep. Lincoln Diaz Balart (R—Cuba) called for permanent Spanish-speaking enclaves in the U.S).

“Wave of hate”—that’s a good one—catchy, just the way the MainStream media likes it.

While I deplore the anti-American stand that the country’s largest ethnic identity lobbyist takes, I am in awe of its ability to coin phrases and dupe the media (which considers La Raza the nation’s pre-eminent Hispanic think tank) into believing that it walks the high road.

At the same time, because of its skill at the word game, La Raza has convinced the press, Congress, the Chamber of Commerce and religious groups of all denominations that we who favor less immigration are lower than pond scum.

Twenty years ago, the most common term to describe individuals illegally in the U.S. was “illegal immigrant”. Although it appeared in print from time to time, the correct term, “illegal alien” was always a tough sell for us.

Then, out of nowhere, appeared “undocumented immigrant” appeared.

That lasted a while but before long “undocumented worker” replaced it—much more persuasive from La Raza’s view because it suggests that aliens work. That’s not always true, of course, but it sure sounds good.

And what are we? Among other things, we are “racists,” “xenophobes,” and “nativists”.

Now that a growing respect for our position has emerged, we have been upgraded to “anti-immigration” or, the warmest and fuzziest of all the terms used to describe us “immigration restrictionists”.

As it now stands, we, the “immigration restrictionists” who ride a “wave of hate” are pitted against the “undocumented workers” and their “family values.”

As I said earlier, you can’t help but admire how cleverly our opposition has outmaneuvered us.

Every move it makes is calculated and coordinated. La Raza excels at finding the right people to represent it. Look at the biography if La Raza’s Chief Executive Officer Janet Murguia.

Murguia earned three degrees from the University of Kansas: a B.S. degree in journalism (1982), a B.A. degree in Spanish (1982), and a J.D. degree (1985) from the School of Law before beginning her career in Washington, DC as legislative counsel to former Kansas Congressman Jim Slattery.

From 1994 to 2000, Murguia worked at the White House, ultimately serving as deputy assistant to President Bill Clinton and according to her biography, “providing strategic and legislative advice to the president on key issues” which I assume included immigration. Murguia also served as deputy director of legislative affairs, managing the legislative staff and acting as a senior White House liaison to Congress.

Before returning to K. U. in 2001 as Executive Vice Chancellor for University Relations, Murguia was the deputy campaign manager and director of constituency outreach for the Gore/Lieberman presidential campaign.

From her predecessor, Raul Yzaguirre, Murguia inherited an organization headquartered in Washington, DC with field offices in Los Angeles, Chicago, Phoenix and McAllen, Texas. And La Raza has more than 140 “formal affiliates”. See the NCLR brochure describing its operations here.
La Raza has money to burn.

In an NPR interview, outgoing La Raza CEO and chief financial officer Yzaguirre told correspondent Tony Cox that, during his thirty-year tenure, the organization’s budget had grown from $500,000 to $40 million—or an incredible $1.3 billion including its “affiliates”. Listen to the interview here.

The savvy Murguia parlayed her White House insider experience into a seat at the table during this year’s “behind closed doors” negotiations during this spring’s thwarted amnesty effort.

When pressed by Lou Dobbs in a recent interview about her role in the Senate meetings, [Transcript, June 17, 2007] Murguia refused to deny that she participated.

And a Capitol Hill insider told me that La Raza staffers work closely with Senator Edward M. Kennedy providing him with a laundry list of its demands.

In short, La Raza out-muscles us. The Federation for American Immigration Reform has the most offices of any immigration patriot organization with four.

I’ll estimate that the aggregate “restrictionist” budget is a fraction of the $1.3 billion available to La Raza.

And, as we all know, no “immigration restrictionist” a.k.a. patriot was present during the Senate’s Comprehensive Immigration Reform dialogue. Murguia, on the other hand, with her insider background, has the Senate’s ear. We can’t get our phone calls answered.

But, despite La Raza owning the politicians and the print media and having bottomless pockets to carry out its open borders agenda, it could not pull off amnesty.

That says tons about our position’s merit and is an enormous comfort as we go forward in this endless battle. When our victory is considered in light of the La Raza frontal assault against us, it becomes all the more impressive.

La Raza is right about one thing. A “wave” is sweeping across America.
But hate isn’t part of it. What’s at play instead is frustration, disgust and anger.

We’re frustrated at the federal government’s refusal to enforce immigration legislation, disgusted at the Mexican government for condoning illegal immigration and angry at the likes of La Raza for its overtly subversive agenda.

La Raza has the money, the wide network of offices and the high level connections. But we are on the right side of the argument.

Joe Guzzardi [e-mail him] is the Editor of VDARE.COM Letters to the Editor. In addition, he is an English teacher at the Lodi Adult School and has been writing a weekly newspaper column since 1988. This column is exclusive to VDARE.COM.