Not Even Clemens Is Immune to Injury Streak

BOSTON, June 2 — A season rife with injuries took another discouraging turn for the Yankees on Saturday when they learned that Roger Clemens would miss his start in Chicago on Monday with a right groin injury. 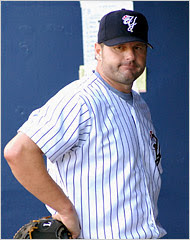 Clemens was optimistic that he could return next weekend to face the Pittsburgh Pirates at Yankee Stadium. When Clemens called General Manager Brian Cashman during the early part of Saturday’s game, Cashman told him to report to Tampa, Fla., where the Yankees’ medical staff will evaluate him.

“If he was just about money, he would have showed up on Monday,” Cashman said. “He didn’t have to tell anybody anything. But he’s about what’s best for the team, and I respect and appreciate the fact that he understands the importance of the entire situation. Monday was a no-go.”

Cashman and Manager Joe Torre said that the left-hander Kei Igawa, who has spent nearly a month in the minors working on mechanics, is a strong candidate to start in Clemens’s place against the White Sox. Matt DeSalvo could also be recalled for the start now that Doug Mientkiewicz, who left Saturday’s game after a collision at first base in the seventh inning, is on the disabled list.

Clemens is not on the major league roster and thus has not begun collecting his prorated salary of $28 million from a contract he agreed to on May 6. Clemens, who turns 45 in August, has made three minor league starts for the Yankees’ affiliates without any reported physical setbacks. But the groin, which troubled him off and on in his first five years with the Yankees, acted up during his last start, on Monday for Class AAA Scranton/Wilkes-Barre.

Clemens pitched well that night, allowing only two hits over six shutout innings, but he has been unable to shake the discomfort. The Yankees’ next nine games after their four-game series at Chicago are at home, meaning Clemens would make his first start at Yankee Stadium if he heals quickly.

The Yankees called the injury a fatigued right groin, because that is what Clemens told them. They will know more when Clemens is examined in Tampa on Monday.

The Yankees had been optimistic that Clemens could join Chien-Ming Wang, Mike Mussina and Andy Pettitte to give them four formidable starters in their rotation.

Instead, they may have to rely on Igawa, who was 2-1 with a 7.63 earned run average in six games before the Yankees sent him to the minors to work with the pitching coordinator Nardi Contreras.

Cashman said the Yankees would like Igawa to continue working in the minors; he is the scheduled starter for Scranton on Sunday in Rochester. But it has been a season of sudden adjustments, Cashman said, and the Yankees may rush Igawa back.

They invested $46 million in him over the winter, including a $26 million posting fee to Igawa’s Japanese team, the Hanshin Tigers, and a $20 million contract for five years. The contract made Igawa the only Yankee signed past 2010.

He had three decent outings with the Yankees, including victories over the Cleveland Indians and the Boston Red Sox. Gil Patterson, a minor league pitching coach, said that besides the physical work Igawa has done, he has needed a confidence boost.

“Sometimes, it’s not only physical,” Patterson said. “He’s got to recognize that he pitched against two of the best offensive teams in baseball — the Red Sox and Cleveland — and pitched awfully well. He should know he has it in him.”

Contreras and Patterson have tried to improve Igawa’s balance — one of the drills is called the “Flamingo,” after the bird that balances on one leg — and urged him to bend his right leg as he strides in his delivery. The hope is that, whenever Igawa is ready, he can combine better mechanics with a sound approach.

“We talked about being a samurai warrior,” Patterson said, “being relentless and not giving in.”

Igawa may be that way, eventually. Clemens won 348 career games with that mentality. The Yankees will keep waiting for him, and try to get by in the meantime.
Posted by jtf at 4:25 PM