Those who seek to halt the flow of illegals are neither anti-immigrant nor racist. 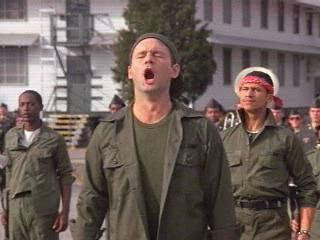 
ENOUGH Emma Lazarus. For many of us, the definitive pro-immigration speech comes from Bill Murray in "Stripes": "We're all very different people. We're not Watusi, we're not Spartans, we're Americans. With a capital 'A.' And you know what that means? Do you? That means that our forefathers were kicked out of every decent country in the world. We are the wretched refuse. We're the underdog. We're mutts…. But there's no animal that's more faithful, that's more loyal, more lovable than the mutt. Who saw 'Old Yeller'? … I cried my eyes out."

Murray's speech may lack poetry and intellectual rigor, but most Americans have a similar visceral attachment to our national immigration story. To be perceived as anti-immigration is to be seen as un-American.

So how did Republicans, who normally embrace patriotism, American exceptionalism and rugged individualism, get on the wrong side of this story? How have people who oppose illegal immigration allowed themselves to be painted as both anti-immigration and, more absurdly, "anti-immigrant?"

Liberals and — dismayingly — many "pro-immigration" conservatives will tell you it's because the "anti-immigration" right is racist, nativist, hate-filled and the like. That's basically President Bush's view.

And to be honest, there are conservative voices on immigration I wish would shut up. But they are the minority. There's a reason so many people claim that conservatives speak in "code" about immigration. It's because so few prominent Republicans or conservatives are actually saying anything objectively racist.

But Latino groups, the Democratic Party and others who favor something like amnesty for illegal immigrants have an interest in promoting the racism charge. They lump illegal immigrants with blacks and women as civil rights victims. They argue that a wall with Mexico is racist because it keeps Mexicans out of the U.S., that opposition to bilingual education is anti-Latino because it's aimed at Spanish speakers and that complaints about illegal immigration generally are anti-immigrant and anti-Mexican because it just so happens that the majority of illegal immigrants are from Mexico.

And the really infuriating part is that so many people buy this nonsense. The reason immigration restrictions are aimed at Mexicans and Latinos is quite simple: that's where the problem is. Whether you agree with them or not, most "anti-immigration" conservatives actually think that there is an important distinction between legal and illegal immigration. Want a hint as to why? One is legal and the other isn't.

Philosophically and politically, I am on the side of every pro-immigration movement of the last two centuries. We're a better country because of previous waves of immigrants.

But since the 1980s, the debate has changed. Whereas in the past the debate was about what our policy should be, today the argument is really about whether we should have a policy at all. Because if you don't care about enforcing existing immigration laws, you're really saying that you're not in favor of having any immigration laws at all. It is difficult to think of another sphere of public policy in which liberals would be nearly so cavalier about lawbreaking.

The most important immigration policy is to enforce the policy, whatever it is. Then, if it's not working, you can change it. But by turning a blind eye to illegality while spouting empty rhetoric, you incite populist rage from citizens who don't like being played for suckers.

The White House says it cares about enforcement, but Bush's credibility — indeed all of Washington's credibility — on illegal immigration is simply nonexistent. Bush and his supporters have bought into the idea that being pro-enforcement is anti-immigrant, which is why every move he makes on the issue is the political equivalent of Foghorn Leghorn trying to walk through a field of garden rakes. Conservatives dislike being called bigots and yahoos by liberals. They're even more vexed when such barbs come from the leader of their own party.

But those same conservatives have stepped on their own garden rakes because they've allowed themselves to be cast as the villains in one of America's greatest stories.

jgoldberg@latimescolumnists.com
Posted by jtf at 8:52 AM