Steve Morse: In the Shadows, Edge Sharp as Ever 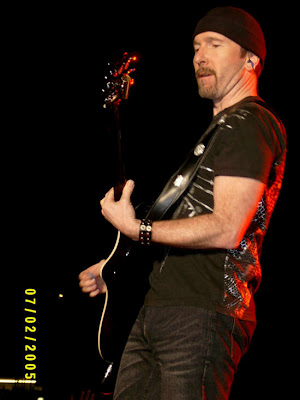 Imagine for a moment what it's like to be the Edge. The U2 guitarist has defined an era's worth of rock riffs and rhythms, making the band one of the most successful of all time. A multitude of modern-rock acts bear his sonic stamp.

And yet Bono -- he of the slicked-back hair and wraparound shades -- gets the glory. When the charismatic lead singer isn't stalking the stages of the world, he's elbowing his way onto the world stage, meeting with politicians and power brokers, rallying for third-world debt relief and AIDS funding.

All the while, the Edge remains the ultimate team player, one who doesn't mind serving as the quiet stoic (his nickname is ''the scientist") to Bono's rabble-rouser. But one has to wonder, does the band ever try to rein in Bono -- just a little? The Edge would be the man to ask.

''There are moments when you question whether it's the right balance between the politics and the music," the Edge acknowledges. ''It's a challenge to make sure the music doesn't become a sideshow to what Bono is doing. But, really, Bono enjoys the music so much more than he enjoys any of the other stuff, so I don't think he'll ever allow it to get too far out of balance.

''If we weren't still making good records and still functioning as a band," the Edge adds, ''I don't think [Bono] would be given the political access that he has."

There's no debate about the potency of U2's latest album, ''How to Dismantle an Atomic Bomb," which has sold more than 3 million copies since its release last November. Tickets for the band's tour, which comes to the FleetCenter for three nights this week, disappeared in the blink of an eye.

The new album has been called the band's best since 1987's ''The Joshua Tree," but the Edge thinks the new one is even stronger. ''I think side one of 'The Joshua Tree' is an amazing collection of songs, but side two was good but not as great. I'm talking now about pure songs. But I think the new collection, just in terms of songs, is our best-ever record."

''At this point, U2 remains the most vital and important band on the planet," says Carter Alan, the midday DJ for Boston rock station WZLX-FM (100.7) who wrote the unauthorized U2 biography ''Outside Is America," reissued in 1997 as ''The Road to Pop."

''A lot of bands that started when U2 did [in the late 1970s] stopped caring later on, or got sidetracked or taken off course by personal problems, drug problems, or band problems," Alan says. ''U2 has never gotten knocked off their course. . . . They defy the rock 'n' roll model that if you become famous, you self-destruct."

Of course, bands, even the best intentioned, can get sidetracked for a variety of reasons. The Edge says U2 works hard to make sure that doesn't happen.

''Even on this tour, we had to be careful about what the opportunities were in the show to include some aspects of [Bono's] work," says the Edge, whose real name is David Evans. ''Of course, it would be ridiculous not to comment in some way, because it's such a central part of what has been going on for the last while. But at the same time, it's only one aspect to what the show is about. It's become, I think, the central theme in some ways, but obviously there are a lot of songs about other things, so you don't want it to be the entire show."

Bono has always been a firebrand. His political views have informed some of the U2's best songs, from ''Sunday Bloody Sunday" to ''New Year's Day." And while the Edge, bassist Adam Clayton, and drummer Larry Mullen Jr. may not be as vocal, they are hardly apolitical.

''We grew up in the punk era," the Edge says, recalling the start of the group in Dublin. ''The first live band I ever saw was Stiff Little Fingers and, you know, the Clash were not long after that. We didn't grow up listening to bands like Led Zeppelin -- the bands that were about pure musicianship. Our first experiences with live bands were bands that had a political awareness, and it always felt natural for us to include it."

U2 didn't get where it is without shaking things up.

''We've always thought, 'Throw it all in there -- politics, sex, religion, spirituality, everything.' And I think it's worked over the years," the Edge says. ''One of our favorite acts was Bob Marley for the same reason. He didn't avoid areas of his life."

The Edge is the first to admit that he's amazed at how much Bono has accomplished personally, especially in his fight to reduce the AIDS pandemic in Africa. ''I think what has been fascinating to Bono, and to me as a close observer of his activities, is to see how some help from key people -- like Bobby Shriver [nephew of John F. Kennedy] and the rest of his advisers -- has helped Bono infiltrate the political system of America and really get some traction. And being, as he describes himself, a 'pain in the [expletive]' for a lot of politicians, it does actually work."

For his part, the Edge is known as the band's technology activist -- and is given credit for pushing U2 into doing an iPod commercial featuring the first single, ''Vertigo," from the band's latest album. The ad ignited some controversy from U2 fans.

''I think the iPod commercial was brave," he says. ''It was taking a chance and we knew it would draw some fire, but I think the vast majority of people understood the reasons why we did -- and that it was partly to support something really good for music, which is the digital distribution system concept. Also, from our point of view, it was a great way to draw attention to our song at a time when it was coming out."

''I've always loved U2," says Bruce Springsteen, who inducted U2 into the Hall of Fame, in a recent phone interview. ''I've loved their open heart, the openness of their music, and their willingness to lay it all out on tour. They welcomed the audience in a certain way without allowing it to ever compromise what they did."

U2 has received a few critical knocks on this tour -- notably from a Chicago writer who ripped the ''tired nostalgia" of its first show in that city. The Edge, forever candid, acknowledges that show wasn't the band's best.

''But mostly, I've been very happy with the shows," he says. ''We've tried to mix it up and do some songs we haven't played for years from our early records, and also play a reasonable amount of the new album with some old classics. So far, we're not really playing our big, big songs. I think we might have done 'I Still Haven't Found What I'm Looking For' just one night, and 'With or Without You' might have been just one night, too. And we put 'Bad' in just a couple of nights ago.

''We're being very selective about the really well-known songs from the past. . . . There's a big debate all the time to get the balance right."
Posted by jtf at 9:17 AM