Newark Star-Ledger: Beginning of the End For the Sopranos 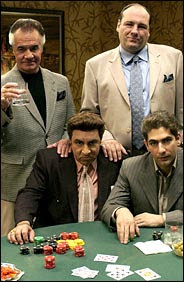 Dons don't wear shorts except in rehearsal.
It's Tuesday morning, and the cast and crew of "The Sopranos" have descended on Cozzarelli's in Belleville, the unofficial funeral home of the HBO mob drama.

As with all "Sopranos" wakes, most of the cast is on hand. A few minutes before the first rehearsal, some of the supporting actors (Max Casella, Frankie Valli) are already in full wardrobe. Edie Falco strolls over from her trailer with her hair in curlers, while Steven Van Zandt shows up sporting Silvio Dante's hairpiece and Little Steven's concert wear.

Then in strolls Van Zandt's other Boss, James Gandolfini, in black T-shirt, shorts and rumpled hair, trying to polish off his breakfast before the start of what will be a 12-plus- hour day for the actors and even longer for the crew.

Tim Van Patten, director for this episode, pulls the main cast inside Cozzarelli's while another crew member tries to wrangle the extras.
"Where are my wiseguys?" he asks. "Raise your hands if you're non-SAG (Screen Actors Guild)."
It looks like business as usual for "The Sopranos," but before fans get too excited about the return of Tony and Carmela, keep in mind that business as usual for this show includes longer and longer breaks between seasons.

Season 5 ended nearly a year ago, and though production on season 6 began at the end of April, the finished episodes won't air until probably March or April of 2006.

Asked whether he gets questions from fans about when the show will be back, Van Zandt groans, "Only every day!" Aida Turturro says, "We should just wear the T-shirts out all the time," referring to shirts the cast has printed in off-seasons past detailing the return date.

To all those viewers perplexed or angry about having to wait nearly two years between seasons, writer/producer Terence Winter says, "Your patience will be rewarded. If you've enjoyed the show in the past, you'll continue to enjoy it. The reason I think it's so good and it works is we really take the time to craft it. We don't just churn them out."

Winter, who wrote the episode being shot at Cozzarelli's, the sixth season premiere, adds, "Our season is very long, very intense. We have months on end of 15-hour days; we're all really tired. We need time to rest and regroup. This year in particular. David (series creator David Chase) wrote this pilot in 1997, he's been with this thing more than anyone, he needs some time to rest and think about things."

Tony Sirico, his hair already sculpted into the famous wings of Paulie Walnuts, calls the long production hiatus "a little hard to swallow, but when you think of the alternate of not coming back at all, we all raised our hands."
The new season will pick up roughly in real time, about two years after the deaths of Adriana and Tony B. and the arrest of Johnny Sack.

"There will be some changes," Winter explains. "There are certain ramifications to things that have happened in the past. These characters aren't necessarily in touch with their feelings, so there will be old wounds still there, but not necessarily in your face."
And though the actors had been away from these characters for more than a year, few found it tough to readjust.

"It's amazing how quickly it comes back. You get into battle gear here," Van Zandt says, pointing to Silvio's pompadour, "and you're there. By the time you come out of the trailer, a year and a half goes away."

"At the first script read-through, we sat down and all the characters were there at the table," recalls Falco. "The longer you are someone, the easier it is to fall back into them."
An hour after the first rehearsal, the actors return -- Gandolfini now cutting a far more imposing figure in one of Tony Soprano's pinstriped suits and continue working with Van Patten and Winter on the staging of the scene.

The mood is light. Sirico and Joe Gannascoli (Vito Spatafore) study each other's suits to see which has the better tailoring. Gandolfini mocks the new tan on the face of Steven Schirripa (Bobby Bacala), while Schirripa is giving Van Zandt the business about Silvio's fuller, less helmet-y hairstyle.

"It grew overnight, what can I say?" Van Zandt cracks, as Schirripa tries to get the rug to move with a hand-held electric fan. "I haven't had a haircut in a while."

Whatever cut-throat action may happen when the cameras roll, in real life this remains one of the tightest-knit groups on television.

"This show has the lowest rate of turnover in the crew of any show I've worked on," says Van Patten. "It's pretty much 90 percent of the same people who are here. That's rare. People who work on the show love it, are protective about it."

"This show is monumental in my life, and it goes beyond money or celebrity," says Sirico. "It means a lot to me. I put a lot of time and a lot of hard work into it, and it works. It's our family. Everybody on this show, we're really friends. I can't wait to get to work."
The cast goes through the long scene take after take. Gandolfini has particular trouble with a line where Tony replies to Christopher's complaint that the mood is morbid by saying, "This is a funeral home. We're surrounded by death." On one take, he mistakenly says, "We're surrounded by dead people," and Michael Imperioli jumps back and delivers a startled "Where?"
Between takes, Sirico, a reformed ex-con, gives mob etiquette lessons to the other actors on when to kiss and when to shake hands.

"Well, they asked me," Sirico says later, insisting that during his long-ago life of crime, "I was never at mob sit-downs, but I know the way they act."

Huddled in with familiar wiseguys like Gandolfini, Sirico and Imperioli is Lenny Venito, playing a new character called Butter. One actor wonders what role Butter will play in the season.
"He's the new Richie Aprile, the guy we yell at for nine months," Gandolfini suggests, but no one knows especially not Venito.
"This is not only my first day, but my first two hours," he shrugs. "I know what you know."

This need-to-know approach isn't limited to the newcomers. In an attempt to prevent storylines from leaking, no actors have seen more than the script for this episode, and some claim to have only been given the pages featuring their characters. This can lead to some frantic information-sharing, especially for a show where the high fictional death rate means no one's long-term employment is guaranteed.

"We always ask each other, 'What have you heard?'" says Gannascoli, whose character was revealed to be secretly gay last season. "I'm worried. After what I did, it (getting whacked) could happen to me."

"It seems like there's a lot of interesting things this year," says Turturro. "I don't really know what they all are, and if I did, I probably couldn't tell you."

As big a mystery as their alter egos' fates is the future of the series. Chase has declared this will be the final season, but as several actors are quick to point out, he's said that in years past and then changed his mind.

"The most current information I have is that this is the last year, but it's not etched in stone," says Winter. "I think I'll believe it when I'm told it, when we're on the set and they say, 'That's it. Don't come back.'"

The writers are working on the fifth and sixth scripts right now, and Winter predicts a final decision will have to be made by the time they get to episode eight or nine. Chase has kept plans for the series finale entirely to himself "It could end with a giant nuclear holocaust that destroys New Jersey, for all I know," says Winter but no one is eager to hear them.

"I'm trying not to think about it, because for this to end completely is truly depressing," says Van Zandt. "It's a wonderful thing to do. It's a vacation for me, it's a way of relaxing, getting my mind off of work."

"I'm going to wake up in bed one morning and not have an office to go to, and I'm sure I'll break down crying and it'll be a sad and pathetic scene," says Winter. "I've been doing this so long and loving it so long that I'm in denial about it."

Winter's denial is not unique. Sirico is making references to the idea of the long-rumored "Sopranos" movie, even though Chase has said this sixth season is being done in lieu of a film. Imperioli responds to any question about the end by saying he won't think about it until Chase is definitive on the subject. In the event of the worst, Van Zandt is already proposing a Silvio spin-off. ("I'm not kidding.")

Falco, for one, is glad that, "pretend or not," Chase is letting everyone think the show could keep going.

"Because if we all knew all year long that it was the end, there'd be a lot of moping around," she says while having a late lunch in her trailer. "And this way, we're all like, 'Oh, maybe yes, maybe no,' and then episode nine will come; 10; then we'll be done and they'll say, 'Oh, this is really the end,' and I'll be glad I didn't spend the whole year being depressed about it."