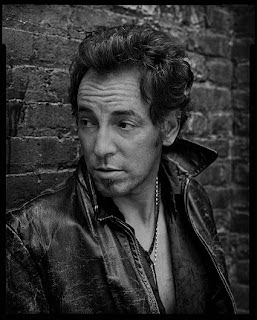 The Quiet American
Bruce Springsteen revisits his acoustic, folk-poet side and revels in storytelling on 'Devils & Dust' tour
By Steve Morse, Globe Staff May 19, 2005

On leave from his more raucous, arena-tailored E Street Band, a solo Bruce Springsteen has been playing guitar, keyboards, harmonica, and even a little banjo on his current small venue tour, which hits the Orpheum Theatre for a sold-out show tomorrow. The New Jersey troubadour is promoting a new CD, ''Devils & Dust," which revisits the acoustic, folk-poet side of his nature, heard previously on 1982's ''Nebraska" and 1995's ''The Ghost of Tom Joad."
Reached by phone in the Midwest this week, Springsteen opened up about politics, the war in Iraq, and what it was like to play Fenway Park:

You're in Cleveland. Isn't that where you also did the last rally for John Kerry before the election?

Yes, you're right. I didn't even think about that. But it was quite a night.
Do you talk to Kerry at all now?I've seen him since the election, but just briefly. [Campaigning] was something I was glad I did, and I met a lot of interesting people. There was a lot of hope and idealism. And on the [Vote for Change Tour] I got to play with all those great musicians -- with John Fogerty and Neil Young and Bright Eyes. It was just an amazing musical experience, but what can I say? I would have liked to see it go the other way. I had a couple of weeks where it was, ''Whoa, what happened?'' Then it's on down the road.

You said onstage recently that someone sent you a box of broken albums and a dead chicken as a protest after the election. Was that true?

Well, the dead chicken part I made up. (He laughs.) That was artistic license. The other parts were true, though. Yeah, I had some spirited responses that let me know that I was striking a chord -- and that's what I was out there for.

Some people say that you're tough on the crowd this tour. I've heard you quoted that if you see cellphones in the crowd, you're going to bring a chainsaw out there. And is beer cut off 10 minutes before the show?

I think the concessions do get shut down early on. . . . But I'm trying to present a certain experience. I say those things [about the chainsaw] with humor, but I'm also very serious about my fun. It's just the kind of music it is -- the quiet and the spaces in between the lines are where a lot of the meanings are. So I don't think I'm too hard on the crowd. They know what I'm trying to do. . . . And I've had some of the best audiences of my life on this tour. I thought the ''Tom Joad" audiences were great, but these have been better.

I've seen many critics compare the new album with ''Tom Joad," but what do you think? To me, the new one has more hope and optimism.

I wrote a lot of this stuff during and immediately after the ''Tom Joad" tour. And because I had such a great time on that tour, I thought, well, maybe I'll do another one and continue to play acoustic. Then we started to work with the band again and four or five years went by. So I had this stuff sort of sitting and waiting to be addressed. . . . There are similarities to ''Tom Joad'' in a lot of the narrative storytelling, but the record as a whole, I haven't made it before.

In ''Devils & Dust," the most recent song you wrote for the album, what kind of feedback have you had on that? Have you had any soldiers comment on it? I presume you're referencing Iraq there.

Yes. I haven't received any immediate letters [from soldiers] as of yet, but I'm always kind of behind on my mail. So it will be interesting to see. So far, it's gotten a variety of responses. There are some people it has made angry. . . . I've seen both sides of the coin on it.

Any thoughts on Iraq now? What do you think of the situation? You took a real humanitarian approach in the song.

I was interested in the soldier's point of view of being young and put in a situation where your decisions are all untenable, that you have to make these incredible life-and-death decisions and you have to make them immediately, then you have to live with them for the rest of your life. . . . The Iraq war continues to be a very confusing mess, and I've lived through that before as a younger man.

The most incredible song to me is ''Matamoros Banks," where you took a reverse chronology of an immigrant going back from his death to a happier moment in his life. How did you decide that?

I don't know exactly. I think what happened is that I wrote the first verse [''The river keeps you down"] and normally that would be a final act. Then I had to think, well, this first verse is very powerful. Where do I go with this? I can't go forward, so I have to go back. It sort of defined itself. I don't think I ever tried to make that verse the last verse. Right from the beginning, that line ''The river keeps you down," that's an opening line. You're into the song the minute you hear it.

How about the song ''Reno," about the prostitute? I heard Starbucks turned the record down (for distribution in its stores) because of that.

Well, that whole Starbucks thing was totally blown out of proportion. There were some discussions, but it wasn't a big deal. And I never took any offense. Hey, it was just a particular record that wasn't for them, and that was fine with me.

Down the road, where does the E Street Band fit in?

I've got some band songs in my notebook right now and eventually I'm going to start to demo them and we'll get together and play again. . . . I don't know if it's something I'm exactly going to be doing next, but I hope to be doing it sooner than later. . . . I love playing with the guys and I also love doing this.

Did you hear the Stones are playing Fenway Park this summer? You got things started there two years ago. The difference is that 10 percent of the Stones' tickets are $453 each. (Springsteen charged $75.)

Really? (He laughs). Well, I'm sure they're going to have a good time. All I can tell you is that it was certainly one of the most memorable concerts of our whole work life. First of all, what was going on inside the park was incredible. The audiences were amazing and on the way out, the streets were just lined with kids and fans. I've never seen anything like it in an American city. We just had a great time, and my thanks once again to Boston fans.
Posted by jtf at 9:07 AM