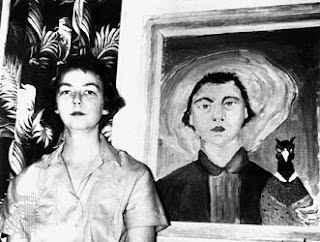 Freaks and other Christians in Flannery O'Connor's stories.

The waspish grandfather of Hazel Motes, an old evangelical preacher "with Jesus hidden in his head like a stinger," broadcasts to listeners willing and unwilling the startling news that to redeem a single "stone soul," Jesus was willing to die "ten million deaths."

That preacher's creator was Flannery O'Connor, the author from Milledgeville, Georgia, who died in 1964 at age thirty-nine--an incalculable loss to American literature. Who in the forty years since has been willing to aim fiction at the deepest metaphysical foundations of human existence? Who, for that matter, still believes fiction can aim at metaphysical foundations? O'Connor disdained to write about anything less crucial, less important than such subjects as the presence of Christ revealed in history and present in the sacraments--all through the life and death, love and hate, grandeur and pettiness of American southerners in all their peculiarity.

Perhaps that's why O'Connor has not faded away but remains a perpetual puzzle for contemporary readers of literature. The highbrow world since the early 1960s has overwhelmingly rejected the possibility of literature driven by the religious faith they believe entirely repressive and destructive. And yet, there stands Flannery O'Connor in their way: a stumbling block, an unavoidable contradiction.

Last year, in The Life You Save May Be Your Own, Paul Elie outlined Flannery O'Connor's life and works in the context of her pilgrimage of faith among such influential Catholic contemporaries as Dorothy Day, Thomas Merton, and Walker Percy.

This year, in Flannery O'Connor and the Christ-Haunted South, Baylor University professor Ralph C. Wood examines O'Connor's writings both to reveal that her southern background illuminated her unique vision and to expose to present-day Christians her cautionary admonitions against a flaccid practical atheism.

Not a traditional biography, Flannery O'Connor and the Christ-Haunted South is a collection of essays aligning Flannery O'Connor's work with the fundamentalist Protestant Christians of the South and explaining the cultural, social, and political dynamic that formed the catapult for her writing.

O'Connor's fiction is filled with rustics, freaks, and prophets, the likes of which--Wood insists--really did populate the deep South she knew. What O'Connor saw is that these strange characters were seeking the truth behind eternity, reckless of the personal cost. As she once declared, "It seems to me . . . that all good stories are about conversion, about a character's changing."

Wood focuses on two major themes to connect O'Connor's literature to southern fundamentalist Protestantism. First, he examines the decline of traditional religious belief in and fear of an omnipotent Lord in favor of what he calls today's "civil religion," which dominates American culture save for that pocket of traditionalist believers who come from the South. Second, he scrutinizes O'Connor's application of southern speech and manners to create a world in which the themes she found worthy, indeed compelling, could be developed.

Flannery O'Connor and the Christ-Haunted South examines the death of true atheism and the concomitant rise of practical atheism, typified by the character of Mrs. May in the story "Greenleaf," who had "a large respect for religion, though she did not, of course, believe any of it was true." O'Connor respected atheists such as H.L. Mencken, because they addressed the issue of God seriously enough to argue against His existence. She would affirm that she was "a Catholic not like someone else would be a Baptist or a Methodist but like someone else would be an atheist." She despised a culture espousing a "civil religion" whose commandments mandate that all religious beliefs have equal weight and that spiritual values derive from democratic principles. Or, as her character Hazel Motes sums up the American gospel: "Nobody with a good car needs to be justified by Jesus."

Is this possible? Well, maybe. As O'Connor wrote, "It is an embarrassment to our fundamentalist neighbors to realize that they are doctrinally nearer to their traditional enemy, the Church of Rome, than they are to modern Protestantism." Indeed, she added, "the Catholic novelist in the South will see many distorted images of Christ, but he will certainly feel that a distorted image of Christ is better than no image at all. I think he will feel a good deal more kinship with backwoods prophets and shouting fundamentalists than he will with those politer elements for whom the supernatural is an embarrassment and for whom religion has become a department of sociology or culture or personality development."

O'Connor believed that the American South constituted a region "haunted" by Christ--and thus, in however distorted a way, was able to avoid the nihilism of the modern age. If the disintegration of morals and religious beliefs into the chaos of nihilism constituted "the very air that we breathe," still, devotion to a system of manners might yield something beyond mere social convention or psychological delusions. Southern manners formed an important buttress for religious values, and so Flannery O'Connor praised the elaborate sense of manners prevalent in southern culture as being "the next best thing to Christian charity."

And yet, she knew the limits of manners as well. The narrow-minded cynics in her stories typically imagine they are exempt from southern manners, because they fail to live Christian beliefs. Meanwhile, her prophets and freaks fail to be mannerly because the religious quest at stake must be revealed in violent action.

This much is true of Wood's goal in Flannery O'Connor and the Christ-Haunted South:

O'Connor's characters could not be other than Southern fundamentalists. They speak with a simplicity of language and boldness of imagery retained only in the rural areas of the South. This vivid simplicity shines in the language of O'Connor's preachers. In "The River," Bevel Summers exhorts his listeners to baptism: "Listen to what I got to say, you people! There ain't but one River and that's the River of Life, made out of Jesus' blood." In The Violent Bear It Away, Lucette Carmody intones, "Divine love cuts like the cold wind and the will of God is plain as the winter"--and shouts "The Word of God is a burning Word to burn you clean, burns man and child, man and child the same, you people!"

The southerner, O'Connor once quipped, greatly feared that he might have been formed in the image and likeness of God. She wanted her work to sound "like the Old Testament would sound if it were being written today." Laconically noting that "subject matter has more to do with region than religion, at least in fiction," she thought that universalism--a vision of the metaphysical roots of reality--was possible only by taking advantage of a narrow parochialism:

Her characters had to travel their salvation journey within the Deep South. Her prophets, like the reluctant Francis Marion Tarwater, may run from "the stink of the Cross," but the Cross will not let them go.

Wood rightly notes the link between Flannery O'Connor's literary freaks and the freakishness of southern fundamentalism. Protestant theologians and atheists alike have found it difficult to "grant cultural standing to fundamentalism," belittling Southern fundamentalists as "primitive agriculturalists . . . inclined to magic." O'Connor found this intense adherence to traditional beliefs a sincere calling and a just ordering of priorities.

AND YET, while it is undeniable that O'Connor empathized with southern fundamentalists in her stories, she nonetheless saw them as potential or unconscious Catholics--and not herself as a secret fundamentalist. Southern Protestantism is a religious place, she wrote, whose "outward forms are farthest from the Catholic and most revealing of a need that only the [Catholic] Church can fill." Her very need to write derived from her Catholicism. Wood mentions O'Connor's observance of traditional Catholic religious practices, including daily Mass and prayers. He also characterizes part of her message as "holding hard to the sacraments that evangelical Protestants are prone to neglect."

But contrast the passage where Paul Elie in The Life You Save May Be Your Own stresses O'Connor's treatment of the Eucharist ("the doctrine of the Body of Christ explained the pain in her bones") with Wood's focus instead on her dramatic depictions of the sacrament of baptism. Baptism represents a political proclamation of allegiance with Christ. It also constitutes a crucial sacrament for Protestants. For Catholics, however, baptism is a sacrament of initiation that is fulfilled in the Eucharist.

Indeed, O'Connor wrote, "the Eucharist is the center of existence for me; all the rest of life is expendable." Her admiration for fundamentalism was based in part on her pleasure "with the amount of Catholicism that fundamentalist Protestants have been able to retain."

One place that the religious reading in Flannery O'Connor and the Christ-Haunted South is especially helpful, however, is in explicating the violence of O'Connor's stories. ("While a lot of folks get killed in [my] work," she once explained, "nobody gets hurt.") Wood argues that the characters' earthly physical sufferings, which include deaths by drowning, gunshot, and goring, lead to spiritual happy endings, because the characters experience the revelation of Divine love.

As she noted to her cloistered correspondents, the monks and nuns with whom she kept in
contact, a Catholic joins the convent and is "heard from no more," whereas a Protestant believer enjoys no such haven and thus "must go about in the world, getting into all sorts of trouble and drawing the wrath of people who don't believe anything much at all down on [his] head." The fierce truths voiced by O'Connor's fundamentalists could hardly be spoken by a typical Catholic mystic.

For O'Connor, the violence acted out in her stories had a redemptive purpose; violence was required to make the religious point: "For the hard of hearing you shout, and for the almost-blind, you draw large and startling figures." Who, in the forty years since her death, has used fiction to shout as loudly as she dared?

Maria Andraca Carano lives in Houston with her husband and three daughters.