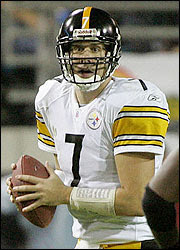 Ben Roethlisberger did what John Unitas, Joe Montana, Dan Marino, Brett Favre and every other NFL quarterback never managed by winning The Associated Press Offensive Rookie of the Year award.

The first quarterback to win the honor since its inception in 1957, Roethlisberger did so unanimously, the second straight rookie to get all the votes. The Pittsburgh Steelers' young star received all 48 votes Wednesday from a nationwide panel of writers and broadcasters who cover pro football.

Ben Roethlisberger took over as the Steelers' starting QB on Sept 19 and took every snap before injuring rib cartilage on Dec. 26.

But Boldin didn't go unbeaten in 13 starts, as Roethlisberger did in leading the Steelers to a franchise-best 15-1 record, which led the NFL this season. Neither, of course, has any other rookie QB.

"I think it is just a comfort level every week, learning and practicing, getting on the same page as these guys," Roethlisberger said. "I think that has really helped by being out there in practice and working with these guys, the receivers, the linemen, the running backs, and just getting familiar with each other has really helped our success and our progress."

And the Steelers' defense was the league's best, allowing the fewest points and yards.
That meant Roethlisberger didn't need to win many games with his arm.

Yet when he did, he brought back the AFC North champions with late drives to beat Jacksonville and the New York Giants. His composure, competitiveness and intelligent handling of the offense were keys to those wins — and several others in which he didn't require such heroics.

"I did not really know what to expect," said Roethlisberger, the 11th choice in the first round of the draft — and the third overall quarterback taken behind Eli Manning and Phillip Rivers, neither of whom had much of an impact.

"I thought coming in, knowing about Tommy (Maddox) as the starter, that I was going to come in and just try to learn this offense and try to learn to be a backup, whatever coach was going to ask of me," Roethlisberger said. "Obviously, things changed."

They changed when Maddox injured his right elbow in Game 2 at Baltimore, the Steelers' only loss. There were loud doubts about Pittsburgh's chances of prospering with a rookie quarterback, including some from Roethlisberger's teammates.

He silenced those doubters very quickly.

"We've got mostly the same guys, it's Ben that has made a big difference," linebacker Joey Porter said. "Everybody else has been here. Duce and Ben are the biggest two additions we had. Nobody knew he could play at this level this early."

Roethlisberger finished fifth in passer rating at 98.1. He completed 196 of 295 passes — yes, only 99 incompletions — for 2,621 yards, with 17 touchdowns and 11 interceptions. His best work came in the middle of the schedule and he wasn't quite as dynamic in December. But he kept winning, even as he was given more responsibility in the offense.

"I think we will surely evolve and add more plays and do more things as an offense," he said, "and I can kind of become more diversified as we continue on this quest this year and in coming years."

Roethlisberger, whose sensational rookie season could earn him $2.6 million in bonuses, is the fourth Steelers player to win the award, joining receivers Louis Lipps (1984) and Jimmy Orr (1958) and running back Franco Harris (1972).
Posted by jtf at 1:52 PM