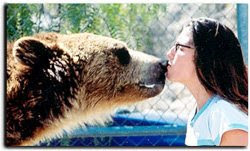 A journey far from over: People and bears must find ways to coexist
By MIKE STARKOf
The Billings Gazette Staff

Theresa Lineberger can still remember the young male grizzly that crawled onto her family's deck, perched itself on the railing and munched on all of the crab apples he could swipe from a nearby tree.

"I nailed him with a full can of (pepper) spray," said Lineberger, an emergency room nurse who lives on a ranch near Wapiti, Wyo., with her husband, Ron. "I don't dislike (bears), but when I'm home, where I'm supposed to feel safe, I don't want to have encounters."

Bears, black and grizzly, are common at the Linebergers' place. One summer and fall, 11 had to be trapped and relocated.

Like many who live in the heart of grizzly country, the Linebergers are tolerant of bears and, increasingly, are making efforts to live peaceably with them. At their ranch 20 miles west of Cody, they have put up an electric fence, take down bird feeders during the summer and try to keep apples and other bear attractants out of reach.

A yearly field trip has even been organized to have the students from the Wapiti school pick apples off the ground at their property and take them to the school to make applesauce.
The efforts help keep the family safe and reduce the risk that grizzlies have to be trapped.
"What we're trying to do is keep bears from getting into trouble and give them an opportunity to keep living," said Lineberger, who also co-wrote a grant that paid for a bear-proof fence at the school playground.

Grizzlies have become a way of life for residents along the North Fork of the Shoshone River. The improvements by people like the Linebergers will help reduce the risk of conflicts between people and bears - but won't eliminate them.

"You can still be doing everything right and something bad could happen," Lineberger said. "It's not anybody's fault. They're just not tame animals."

As the grizzly population around Yellowstone National Park and elsewhere continues to expand, more bears and people are going to be bumping into each other.

The trick is finding ways to coexist. In some cases, that means replacing regular garbage cans with bear-proof Dumpsters, placing electric fencing around beehives or knowing more about how to behave in the backcountry. In other cases, that could mean allowing some of the most troublesome bears to be trapped or killed and, in certain situations, retiring federal grazing allotments where grizzlies are common.

"Wherever there's people and grizzly bears, there will always be some level of conflict," said Kim Barber, a bear biologist with the Shoshone National Forest. "But bears are here to stay and people are here to stay. There's got to be some common ground."

Finding that "common ground" may sound simple, but it also has required a psychological shift in how people view grizzlies. As settlers moved into the West, the intimidating grizzly was largely seen as a blood-thirsty beast capable of ruining livestock operations and worse. Surviving meant keeping the bear at bay.

"The old attitude was, if it got in the way, we got rid of it," Barber said.

These days, some people still fear the grizzly - it is, after all, the biggest meat-eating predator in North America - but are also more tolerant.

That's what's needed as grizzlies expand out of recovery areas like the one near Yellowstone National Park and look to gain a foothold in other areas in Montana, Idaho and Washington state, according to bear experts.

"Any of these small populations, such as the Cascades or the Cabinet-Yaak, until they're the size of the Yellowstone (population) they're in serious jeopardy," said University of Calgary professor emeritus Stephen Herrero, author of the classic book "Bear Attacks: Their Causes and Avoidance." "So they are totally dependent on working things out with humans."

For years, federal agencies have pushed an aggressive public education program, using brochures, classes and roadside signs to talk not only about the potential danger of bears but, more importantly, how best to live with them.

Most of the time, that means leaving bears alone, especially those living in remote areas away from people. But in cases where bears are using the same land as people, a scenario that's becoming more common as the population grows, something extra is needed.

SUCCESS ON THE ROCKY MOUNTAIN FRONT

Mike Madel was hired by Montana Fish, Wildlife and Parks in 1986 to help ranchers cope with an increasing number of grizzlies on the Rocky Mountain Front that were wandering out of the wilderness and onto private land.

"It was probably the most controversial area relative to grizzlies because they were down low where people didn't expect them," Madel said.

In places like Choteau and Dupuyer, Madel found ranchers frustrated that bears were coming onto their property and killing sheep and cows.

In particular, bears congregated at the "bone yards" that popped up each spring after cows died during calving season. The cow carcasses had become a consistent source of protein for hungry bears emerging from hibernation.

Ranchers, Madel and others began redistributing the carcasses to more remote spots that still allowed bears to get the meat but reduced the number of conflicts with people.
That step alone has reduced problems with grizzlies by about 80 percent in May and June, Madel estimated.

Nothing, though, has been more effective than educating the public and trying to find solutions that work for each landowner, he said. Madel regularly works with about 150 ranchers and spends nearly half his time talking with them one on one.


"It's fair to say attitudes toward the grizzly bears have come a long way," Madel said. "Most ranchers are willing to coexist with grizzlies. It's their land, and they see more grizzlies than most people ever do."

In Wyoming, Mark Bruscino has seen a change in attitude, too.

"There are people that aren't particularly fond of grizzly bears but they're doing what they can to get along with them," said Bruscino, a Cody-based bear management officer for the Wyoming Game and Fish Department.

Bruscino deals with about 20 "nuisance bears" each year, many of them along the north fork of the Shoshone River. In most cases, the bears are trapped and relocated to a wilderness area. Bears that return and cause chronic problems are usually killed.

As more and more people move into bear habitat, and as the number of bears increases, there are more frequent conflicts at ranches, subdivisions and campgrounds.

"If you think back 20 years ago, bears were relegated to the park and surrounding wilderness areas. The conflicts were mostly in backcountry settings," he said. "Now … there's a whole different set of conflicts."

There are still occasional reports of people feeding bears or accidentally leaving food out, but Bruscino said local residents have taken to heart years of education efforts about dealing with grizzlies.

"I tell you, in Cody if you talk to a local or go to a school and ask 'what do you do when you encounter a bear,' they know what to do," Bruscino said.

As grizzlies expand south and east, more problems can be expected and people will have to adapt. Not everyone, though, is happy about it. Several county commissions have voiced their displeasure about the possibility of grizzlies showing up, and some have opposed food storage orders by Shoshone National Forest.

Removing the Yellowstone grizzly from the endangered species list may give state officials more latitude in dealing with the bears, but it won't alleviate the need to diligently find ways for grizzlies and people to live together.

"There are still a few good areas where bears can make a living and not run into problems," said Barber, the Shoshone forest bear biologist.

"They're doing a good job, but their job is only going to be more difficult," he said.

[See the rest of last year's series "Grizzlies in the West" from the Billings (MT) Gazette below:]

Lodge owners have several bear stories
Prevention is key in bear management
Humans employing containers that are bear-proof
A journey far from over: People and bears must find ways to coexist
The skills to survive: Grizzlies has shown it can adapt to almost any environmental condition
New highway crossings target wildlife safety
Bitterroots may be crucial to grizzly recovery
Back from the brink: Federal government to propose the removal of Yellowstone grizzlies from endangered species protections

Copyright © The Billings Gazette, a division of Lee Enterprises.
Posted by jtf at 10:55 PM