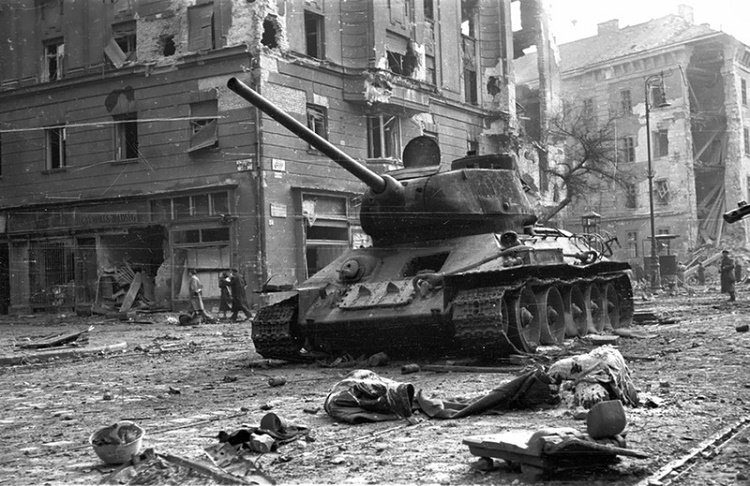 Soviet tanks roll through the streets of Budapest in 1956.


The New York Times — that Democratic Party house organ that fancies itself "liberal" or "progressive" or some such — is actually one of the more reactionary institutions in our country. Sometimes you have to wonder if it might actually be an American version of Izvestia.

Speaking of which, in honor of the fifty-year anniversary of the USA putting a man on the moon, the once-upon-a-time newspaper of record produced this ridiculous nonsense under the rubric "How the Soviets Won the Space Race for Equality."

The Cold War was fought as much on an ideological front as a military one, and the Soviet Union often emphasized the sexism and racism of its capitalist opponents — particularly the segregated United States. And the space race was a prime opportunity to signal the U.S.S.R.’s commitment to equality. After putting the first man in space in 1961, the Soviets went on to send the first woman, the first Asian man, and the first black man into orbit — all years before the Americans would follow suit.

The author, Sophie Pinkham, a doctoral candidate in Slavic Languages, would have to know what these enlightened "multi-culti" Soviets did, in the interest of "equality," just a scant year before the U.S. landed on the moon — invade Czechoslovakia, crushing "Prague Spring."

Oh, but they were putting a woman in space so it was all good. And after all, "Prague Spring" wasn't all that great. It was led by a (gasp!) white male — Alexander Dubcek. The brutal annihilation of the Czech's (naively idealistic but sweet — in retrospect) "socialism with a human face" occurred after the Soviets had done virtually the same thing to Hungary in 1956, a scant twelve years before. You may have seen the photos of the tanks sweeping through Budapest.

Nostalgia for the Soviet Union in any form is dangerous and massively self-indulgent, yet Ms. Pinkham seems to have some peculiar desire to be even-handed, i. e. to see the good side of evil. Perhaps she sees it as fodder for her thesis. She also wrote, "Cosmonaut diversity was key for the Soviet message to the rest of the globe: Under socialism, a person of even the humblest origins could make it all the way up."

Ah, diversity — the new religion. As long as they can put a "person of color" — also, of course, mentioned in the article — or from the proletariat in space, everything else is excused.

Even the Gulag Archipelago. Even the Purge Trials. Even Beria. Even the Plot Against the Doctors. Even Stalin's mass starvation of millions of Ukrainians known as the Holodomor. Even the incarceration of Sakharov and the Refuseniks that was going on before, after, and during the cosmonaut program, etc., etc. (How was that last one in terms of "equality," Ms. Pinkham? As the author also no doubt knows, citizens of the Soviet Union had to carry internal passports identifying their "nationalities" as "Jews," "Tatars," etc. It was the very opposite of equality. It was ethnic and racial stereotyping for totalitarian purposes.)

This whitewashing of the Soviet Union has been a standby of the New York Times almost since Lenin arrived at the Finland Station. The whitewashing reached a fever pitch during that very Holodomor (early 1930s) when Walter Duranty — the paper's Moscow correspondent and perhaps history's all-time greatest perpetrator of fake news — deliberately lied on the newspaper's front page about the extent of the devastation in Ukraine (millions dying) in order to remain in Stalin's good graces.

Duranty won a Pulitzer for his coverage. His photograph still hangs on the wall in the Times building with all the paper's other honorees, in case anyone wants to go and throw up. Ms. Pinkham is unlikely to win a Pulitzer for her space coverage. But she is carrying on a putrid tradition.

Roger L. Simon — co-founder and CEO emeritus of PJ Media — is an award-winning author and an Academy Award-nominated screenwriter. His new novel — THE GOAT — will be out in September.
Posted by jtf at 6:41 AM