The Central Park 5 Were Murderous Thugs

Despite the Left’s attempt to make them martyrs. 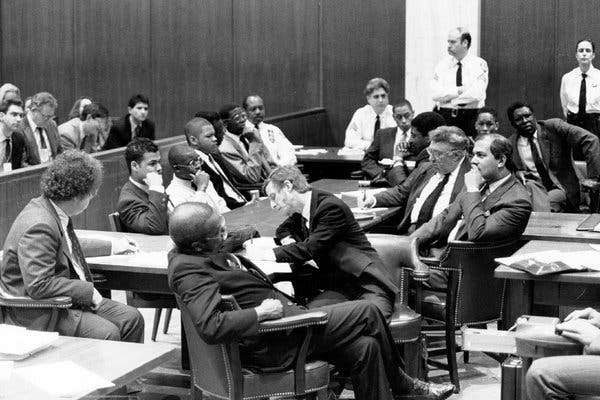 Lawyers, in foreground, and the five defendants in the Central Park rape case of a female jogger waiting for the ruling in February 1990 in State Supreme Court in Manhattan.CreditCredit(James Estrin/The New York Times)

Filmmaker Ava DuVernay’s new Netflix series, When They See Us, is being billed as an important exposé of the American criminal-justice system's racist underbelly. As a review in the Daily Beast explains, it is the “riveting” story of how that system coerced and intimidated five innocent “teenage boys of color” into confessing to the highly publicized “rape and vicious assault of Trisha Meili, a white investment banker,” in New York's Central Park on April 19, 1989. We are told that the boys — Kharey Wise, Antron McCray, Yusef Salaam, Kevin Richardson, and Raymond Santana — tragically had “their youth snatched from them” by the false convictions and the subsequent prison sentences that they served. In a similar vein, a review in The Root lauds DuVernay for her success in “humanizing” these same “innocent young black and brown” victims of institutionalized “abuse, mistreatment and manipulation.” David Ewoldsen, a professor of media and information at Michigan State University, says that When They See Us “is about one of the great injustices in modern American history” against “five teenagers of color.” And a New York Times headlinedepicts DuVernay's series as “The True Story of How a City in Fear Brutalized the Central Park Five.”It's a story we've all heard many times before. And it is a damnable, disgusting lie.Sometime between 9:00 and 9:30 on the night of April 19, 1989, a group of more than 30 black and Hispanic teenagers — including the aforementioned “Central Park Five” — attacked 28-year-old Trisha Meili while she was jogging in the park. One of the assailants — whose identity would remain unknown for the next 13 years — raped her with vaginal penetration, leaving his DNA inside the woman's cervix. As Miss Meili screamed in agony, one or more of her attackers shut her up by fracturing her skull with a lead pipe and mutilating her face with a brick. Meili lost three-quarters of her blood in the assault, and her brain activity could scarcely be detected by medical equipment in the hospital emergency room to which she was later transported. So badly was Meili's face mangled — one of her eyeshad popped out of its socket — that even her boyfriend was able to recognize her only by a familiar ring on her finger. The District Attorney's office initially assigned Miss Meili's case to its homicide unit, because none of her doctors expected that the woman would survive for even a single night. Yet Meili did survive, though she spent nearly two weeks in a coma.

Reyes was a violent psychopath with a long history of forcing his way into women's apartments and attacking them. In one of those cases, he had raped a then-pregnant woman named Lourdes Gonzalez before stabbing her nine times while her young children were in the next room, listening to their mother suffer and die. And yet now, not only was Reyes confessing to a crime for which he had never even been charged, but he was claiming (falsely) to have acted alone in attacking Trisha Meili in Central Park. Why? Reyes said he felt guilty that five innocent men had been punished for a crime that he committed. But those punishments were basically over by the time Reyes made his confession. Four members of the Central Park Five were already out of prison, and the fifth, Kharey Wise, was scheduled to be released very soon. It is simply not believable that a lifelong remorseless monster like Matias Reyes would suddenly have been motivated by a pang of guilt. A much more plausible explanation rests with the well-substantiated fact that Reyes, who had recently been moved to Kharey Wise's prison cellblock, feared Wise's gang and desperately wanted to be transferred to a more secure and hospitable prison location. And sure enough, after he confessed to the rape of Miss Meili, he quickly received the transfer that he wanted.Reyes's confession prompted New York District Attorney Robert Morgenthau to vacate the convictions against the Central Park Five. This, in turn, set the stage for the Five to bring a $250 million lawsuit against the City of New York in 2003, for malicious prosecution, racial discrimination, and emotional distress. For the next eleven years, city attorneys refused to settle the suit and repeatedly vowed that they would fight it out in court.

But when Bill de Blasio took over as Mayor of New York in 2014, his administration quickly reached a $41 million settlement with the plaintiffs. This decision to settle the case was a reflection of de Blasio's deep-seated belief that the American criminal-justice system is infested with racism, and, by logical extension, that the Central Park Five were among its many unfortunate victims. De Blasio articulated this theme with utmost clarity later that same year:
“[O]ur history, sadly, requires us to say that black lives matter.... [W]e’re not just dealing with a problem in 2014.... We are dealing with centuries of racism that have brought us to this day. That is how profound the crisis is.... We have to have an honest conversation in this country about a history of racism, we have to have an honest conversation about the problems that have caused parents to feel that their children may be in danger in their dynamics with police.... This is something systemic and we bluntly have to talk about the historical racial dynamics underlying [it].”
Eric Reynolds, a black NYPD officer who first arrested a number of the suspects in the Central Park jogger case in April 1989, was disgusted by the de Blasio administration's deal with Miss Meili's five assailants. “If we had gone to trial in their lawsuit … all the facts would have come out,” said Reynolds. “It would have been clear they [the Central Park Five] participated, and [Matias] Reyes didn’t act alone. The evidence supported it. They did not want to go to trial. They just wanted to get paid.”Significantly, Reynolds notes that he himself had never been named as a defendant in the Central Park Five's lawsuit against New York City — most likely, he believes, because including a black officer as a target of such a suit would have contradicted the narrative of a white racist system abusing minority youngsters.
As for allegations that the suspects' confessions had been coerced by police, Reynolds says: “[Trisha Meili] was in a coma. If we’re railroading [the suspects], how do we know when she comes out of the coma what story she’s going to tell? If you are trying to pin it on someone, why would you risk that she would say something different?” Mike Sheehan, one of the detectives who investigated the attack against Miss Meili, concurs: “All of this stuff about coercion really pisses me off. Do you honestly think that we — detectives with more than 20 years in, family men with pensions — would risk all of that so we could put words in the mouth of a 15 year-old kid? Absolutely not.”Aside from portraying the American criminal-justice system — and American society generally — as perpetual breeding grounds for white racism, Ava DuVernay’s When They See Us has yet one more noteworthy objective: to depict Donald Trump as a reprehensible racist who, like the country at large, was intent on satisfying his own personal hunger for a proverbial pound of black and brown flesh. At the time of the Central Park jogger attack, Trump, then in his early forties, spent $85,000 to purchase full-page ads in four of New York's daily newspapers, wherein he:
To normal people, those sentiments very ably convey a moral sense of justice and a concern for the well-being of all law-abiding citizens, whatever their color. But Ava DuVernay’s racist propaganda film targeting whites, characterizes them as “disgusting” expressions of anti-black racism. DuVernay's interpretation of Trump's words, along with her whitewashing of the Central Park Five’s horrific crimes, demonstrate just how morally sick the modern Left has become.
John Perazzo is the managing editor of DiscoverTheNetworks.org and the author of Betrayal: The Democratic Party's Destruction of America's Cities.