IT TOOK FALLING ‘OUT OF LOVE’ WITH THE GAME FOR O’REILLY TO LAND WITH BLUES AND GUIDE ST. LOUIS TO STANLEY CUP GLORY


While cleaning out his locker last April as a member of the Sabres, Ryan O'Reilly said he was starting to lose his love of the game, and it resulted in a trade out of Buffalo. Now he's a Stanley Cup champion, Conn Smythe Trophy winner and he couldn't be happier. 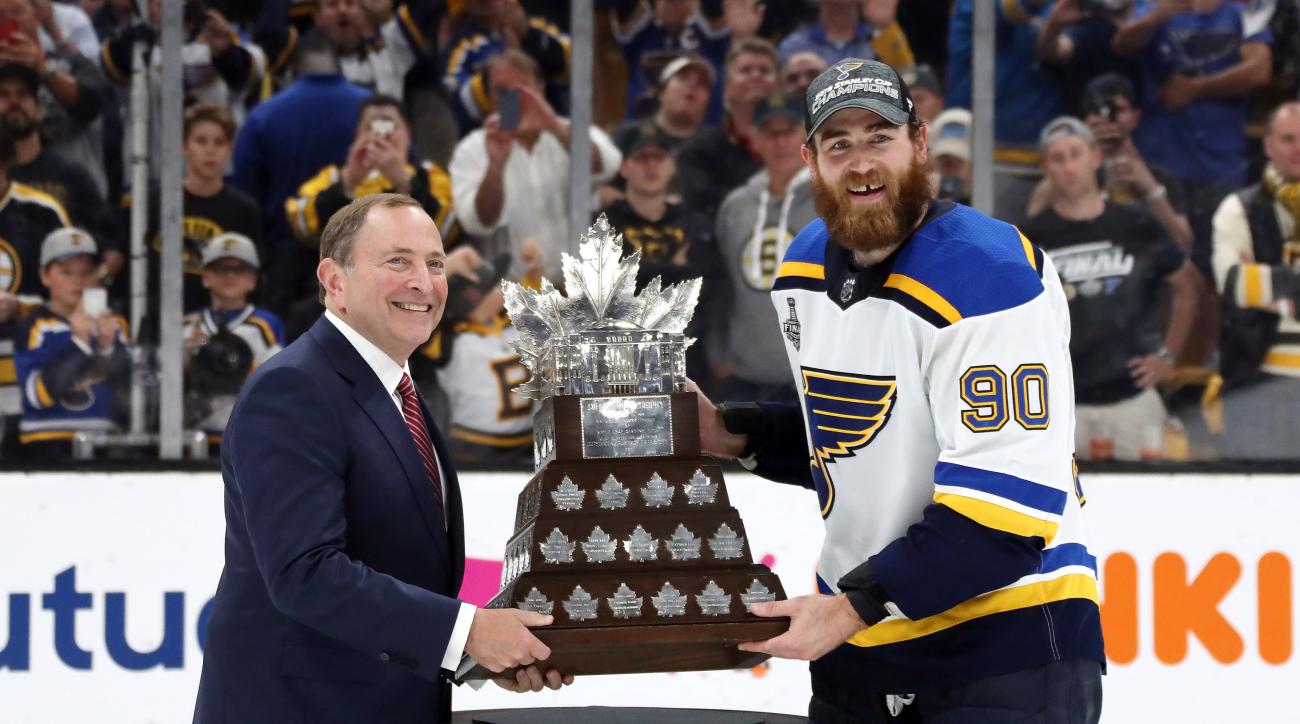 BOSTON – In the end, Ryan O’Reilly kind of talked his way into all of this. If he doesn’t talk about falling “out of love” with the game when the Buffalo Sabres are cleaning out their lockers last season, perhaps he doesn’t get dealt to the St. Louis Blues and none of this happens.
O’Reilly had a lot to say after his trade and almost all of it came true Wednesday night when the Blues shocked the world and defeated the Boston Bruins 4-1 in Game 7 to win their first Stanley Cup in franchise history. And because he backed it up with his play, O’Reilly was named Conn Smythe Trophy winner as playoff MVP.
To wit, in his first conversation with Blues GM Doug Armstrong after the trade: “Let’s go win a Stanley Cup.” Later that summer at the annual BioSteel camp in Toronto: “A Stanley Cup is possible. It’s not going to be easy, but it’s definitely possible.” The day before Game 7 of the final: “I know this has to be the best game of my life.”
The man who couldn’t win for losing before this season – heck, even for the first half of the season – hit the trifecta. Losing isn’t following Ryan O’Reilly around anymore. When Armstrong acquired O’Reilly July 1, and swallowed hard having to pay him a $5-million signing bonus, he said he was never concerned about the O’Reilly comments. Armstrong had already had talks with Buffalo GM Jason Botterill about a deal, then the two spoke during the free agency courting period. After Armstrong and the Blues didn’t even get an audience with John Tavares, Armstrong signed David Perron and Tyler Bozak in free agency and circled back on O’Reilly. “I think the raw emotion came out last year at his end-of-the-year meeting,” Armstrong said. “I think if Ryan could take it back he wouldn’t have said it like that, but at the end of the day that worked out really good for the St. Louis Blues.”
Fast-forward through a miserable first half of the season that started to turn in January. Ironically, because the first-round pick the Blues gave up in the O’Reilly trade was lottery protected, Armstrong was in Russia scouting an under-18 tournament when his team really started to rally. The Blues finished a five-game road trip by beating the Florida Panthers and Tampa Bay Lightning back-to-back on their Dads’ trip, then beat the Nashville Predators in a home-and-home series. “That was when the For Sale sign officially went off the St. Louis Blues,” Armstrong said. “The guys just needed me to go to Russia to get going.”
It was revealed after Game 7 that O’Reilly was actually playing with a cracked rib he sustained in the second round against the Dallas Stars. Although O’Reilly said it had pretty much healed up by the final, that’s not an injury that is a comfortable one to endure. It was funny how lifting up 35 pounds of nickel and silver alloy didn’t seem to aggravate the injury. “I felt great this whole series, but I thought (the Cup) would be heavier,” O’Reilly said. “I guess all the adrenaline made it feel pretty light. I felt like I could have tossed it into the crowd.”
With the Washington Capitals and Blues knocking “win a Stanley Cup” off their bucket lists in the past two years, that leaves 11 markets in the league still without a championship – Arizona, Buffalo, Columbus, Florida, Minnesota, Nashville, Ottawa, San Jose, Vancouver, Vegas and Winnipeg. The Toronto Maple Leafs, meanwhile, are on notice. Their 52-year drought is now the longest in the NHL. In fact, they haven’t even been to a final since last winning the Stanley Cup in 1967, just months before the Blues came into the league along with five other expansion teams. In St. Louis, a fair number of older fans were sporting T-shirts emblazoned with, “Just one before I die.” They’re probably pretty happy right about now. The prairie drought is finally over and it came in a year when it looked bleaker and dryer than it had since the owners abandoned the franchise in 1983 and it almost moved to Saskatoon.
There are a lot of people to thank for that. The Blues don’t do this without Jordan Binnington coming in and saving their season. They don’t do it without Craig Berube, who will have his interim tag removed in record time. They probably don’t do it without Larry Robinson, who came in as a consultant and molded a defense corps that smothered one of the most dynamic teams in the NHL in the final. He’ll pick up his 10th Stanley Cup ring for his efforts – six as a player with Montreal, three as a coach/assistant coach with New Jersey and one as a senior consultant.
But they most certainly don’t do it without Ryan O’Reilly, who led the Blues in playoff scoring, won faceoffs, scored key goals and was a presence on every inch of the ice. “It was always there that we could do it, but to actually do it, it’s exhausting,” O’Reilly said. “It’s exhausting.”
Want more in-depth features, analysis and an All-Access pass to the latest content? Subscribe to The Hockey News magazine.
Posted by jtf at 5:24 AM