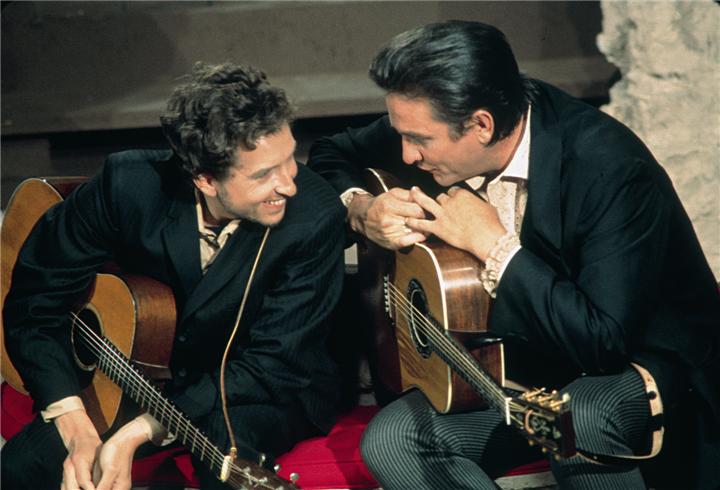 
The 14-disc companion set to Martin Scorsese’s Rolling Thunder Revue: A Bob Dylan Story just arrived in stores, but Dylan’s team is already looking ahead to their next archival project. “We’re thinking about possibly doing Bob’s work in Nashville from John Wesley Harding through the Johnny Cash sessions as the next Bootleg Series,” says a source close to the Bob Dylan camp. “The outtakes from that period have never been heard.”
The exact period they are looking at begins with the three days it took to record John Wesley Harding in October of November 1967 and continues with the eight days it took to record Nashville Skyline in February 1969. Of special interest to Dylan collectors is the fifth day of the Nashville Skyline sessions on February 18th, 1969, when Dylan was joined in the studio by Johnny Cash. Their re-working of “Girl From the North Country” appears on Nashville Skyline, but much of what was recorded that day has never leaked out. That includes a duet on the Dylan-penned “Wanted Man,” which Cash played at San Quentin just one week after the session. They also played “Matchbox,” “Mystery Train,” “You Are My Sunshine,” “Ring of Fire,” “Careless Love,” “Big River” and several others.
Unlike recent Bootleg Series packages that compiled every song in the vaults from key albums Blood on the Tracks, The Basement Tapes, Bringing It All Back Home, Highway 61 Revisited and Blonde on Blonde, this new set will only contain select tracks from the sessions. “I think we did repeat versions of songs to death on The Cutting Edge,” says the source. “We’re trying to find one really good takes of each song. The giant dumps of everything like we’ve done in recent years really aren’t my preference. I like stuff that is more curated.”
Plans beyond this Nashville 1967–1969 set aren’t quite clear, but a Time Out of Mind package is definitely in the pipeline. “We still want to do that,” says the source. “If there are still people putting out physical records for [the album’s] 25th anniversary in 2022, we’ll possibly release it then.”
Many recent Bootleg Series sets have been released due to a quirk in European copyright law that says that any recording not released 50 years after it was created automatically enters the public domain. That may lead to some sort of digital release of concert recordings from Bob Dylan and the Band’s reunion tour in 1974 before the copyright expires in 2024, though a big box is unlikely. “Do people really want that?” asks the source. “We can do a copyright protection, but Before the Flood is a pretty good record. I don’t think it warrants more than that.”
Recordings from Dylan’s earliest folk concerts before he signed to Columbia Records in 1961 have been compiled for a possible Bootleg Series, though there is no great urgency to get it out. “We’ve thought about that for a long time,” says the source. “We collected a lot of early tapes, but fans don’t seem interested in the early stuff. I’ve always found that period really interesting, but I guess a lot of people don’t. We’ll do something, though, because we’ve got all these great things that people haven’t heard, but I think the interest is pretty minimal.”
There’s also been thought given to a set chronicling the sessions for 1983’s Infidels and 1985’s Empire Burlesque. “We do think about it,” says the source. “The Infidels stuff is great, though it needs remixing because it has a very 1980s drum sound. With Empire Burlesque, the tracks didn’t get finished right. The stuff with the Heartbreakers is great, but they tried to make the rest of it sound contemporary and I don’t know if that really works, so I don’t know. We’re thinking about it.”
“The other thing is we want to do a thing of just another collection of stray tracks,” says the source. “It won’t be as interesting as the first Bootleg Series in 1991, but there’s a lot of movie tracks, one-off tracks and things like that are hard to find. I’d like to do another one of those before the Bootleg Series hangs up its box.”
The thought of the Bootleg Series “hanging up its box” may sound horrifying to Dylan fans since there are so many areas of his career that the sets haven’t touched on yet, but it may become a reality at some point in the next few years. “I don’t think we do it post-physical,” says the source, meaning after the market for physical releases completely vanishes. “I don’t think there’s a reason to do it when that happens. I think we’d give up on it. Doing the beautiful package that we put together can only be supported not by streaming, but by physical purchases. The last one sold well, but the places to buy them are going away. You either buy them on Amazon or our website or your local indie record store. It’s just hard.”
Dylan’s core catalog is available on Spotify and Apple Music in full, but Bootleg Series releases are usually posted in incomplete form. “If I could get them to maybe give us a different Bootleg section, that might be different,” says the source. “We’ve been thinking a lot about this. Two years from now, who will listen to [the gospel-years set] Trouble No More? How will they find it? And so we may talk to Spotify and Apple Music about doing a special Bootleg Series section. We’re thinking about it.”
Posted by jtf at 8:02 AM