By Bill Bender
https://www.sportingnews.com/us/nfl/news/packers-legend-bart-starr-left-a-winning-blueprint-for-all-qbs-to-follow/1dxmw9f2mr9o91bk25siwpk66m
May 26, 2019 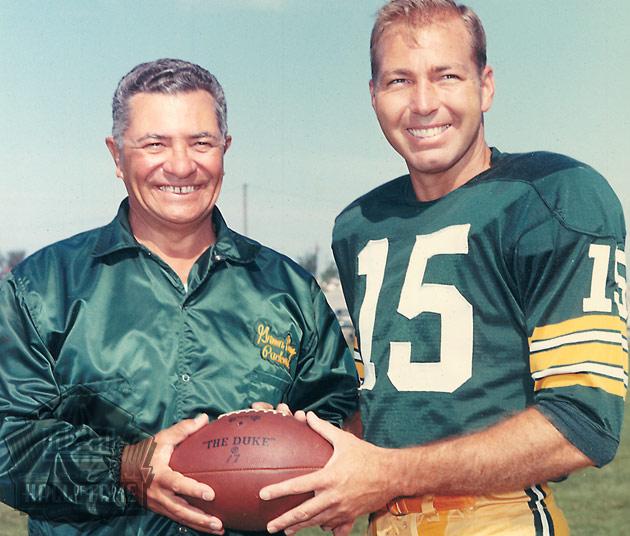 Bart Starr, the MVP of the first two Super Bowls and the quarterback of the Packers' five-championship dynasty in the 1960s, died on Sunday. He was 85.
Expect memories of Starr to pour in for his role on those Vince Lombardi-led teams that transformed Green Bay into "Titletown, USA" and ushered in the Super Bowl era. He is the quarterback who tip-toed behind Jerry Kramer's block into the end zone on a quarterback sneak in the Ice Bowl against Dallas. He is the clutch winner who finished 9-1 in the postseason. He is the Southern gentleman from Montgomery, Ala.
As far as the 26 modern-day quarterbacks in the Pro Football Hall of Fame go, Starr will always be the ultimate Boy Scout.
That's exactly how I'll always remember him, too. After all, that is where I met Starr for the first and only time.
My father grew up during that Green Bay run in the 1960s - which produced NFL championships in 1961, 1962, 1965, 1966 and 1967 - and whenever he talked about quarterbacks, Starr's name always came up first. Starr was a winner. Starr was class. Starr was, well, a star in every sense. That is how you are supposed to play the position.
Of course, I wore Starr's number in junior high trying to impress my dad not knowing I would unexpectedly be thrown into the starting role. I did not win nearly as much, but I tried to carry myself the same way as Starr.
Brett Favre and Reggie White would become my idols later, and I'll never forget covering Favre's Hall of Fame induction a few years after my father passed away. It's like that with my son and I when it comes to Aaron Rodgers now, and maybe it will be like that with him and his children with the next franchise quarterback.
That family tradition starts with Starr.
Starr will never be considered a better quarterback than Favre and Rodgers, and that's fine. He'll still be the winning standard for how Green Bay quarterbacks should be judged, and he maintained that label well after retirement.
I went to an early-season Bengals-Packers game at Lambeau Field in 2009. Favre was in Minnesota, and Rodgers was still trying to cement his spot as the starting quarterback. Green Bay fans were divided on that issue, but at halftime when they trotted out several Packers legends, Starr got the loudest and proudest ovation. There was a never a doubt about that.
Which brings me to the Boy Scouts.
In 2010, my wife Kimberly was a reporter at the Rock Hill (S.C.) Herald, and she was assigned to cover a Boy Scouts of America benefit on March 9. Starr was the guest speaker, so of course, I tagged along. I was not going to pass up on a chance to meet Starr, but it was even better simply listening to him.
Starr spoke about the values of the Boy Scouts and the importance of the organization. The speech was good. But every time he mentioned Lombardi and the "relentless pursuit of perfection knowing all the while we can never attain it," his voice would amp up a few octaves. I went back and looked at the program from that night, and I scribbled in a note in blue pen.
"It all starts with an attitude."
Starr said that when talking about Lombardi, the ultimate motivator who turned the Packers from a bottom-feeder into a dynasty. Starr often told the story about calling his wife after Lombardi's first speech with the team and saying, "We're going to start winning now."
That's what he did best. Starr had such an appreciation for the coach of that dynasty that he deflected much of the attention off himself. He finished 16-of-23 for 250 yards and two TDs with one interception in Super Bowl I and 13-of-24 for 202 yards and a TD in Super Bowl II. Starr would probably get affixed with a label such as "game manager" today, but he essentially did the 1960s version of what Tom Brady does now for Bill Belichick. Lombardi and Starr, a 17th-round pick in 1956, made that work.
Winning was the only thing the mattered. That's why he had so many fans like me who never saw him play in person.
I got a photo taken with Starr and snuck in on a scrum afterward, and he was fielding questions about the Rodgers-Favre drama that reached a crescendo the previous season. Starr gave political answers throughout about those two - he liked both. I snuck in a question about the legacy of his Lombardi teams and where they stacked up.
"Three straight championships, and we're the last team to do it," he said with a bite before staring me down.
That always stuck with me most from that night.
Starr is responsible for one of the most iconic plays in one of the most iconic games in NFL history, but he took the most pride in the fact that the Packers were the last team to three-peat. That accomplishment is every bit as impressive as the 1972 Dolphins' undefeated season because those three championships were from 1965-67.
It's how I'll always approach any sports argument. You start with the championships, then work your way down. After all, it was Lombardi who said, "If you're lucky enough to find a guy with a lot of head and a lot of heart, he's never going to come off the field second."
Starr had both, and he was as close to perfect as you can get. He left a standard for all quarterbacks to follow, both on and off the field, one that Favre, Rodgers and the next one will always be measured against with those five championships.
Starr was the ultimate Boy Scout and forever will be.
Let's hope he's not the last one.