HOW I WAS WRONG ABOUT THE MOVIE “TOLKIEN”


By Joseph Pearce
https://theimaginativeconservative.org/2019/05/tolkien-movie-apology-joseph-pearce.html?fbclid=IwAR1luVOEqznD85ldy6owzT_c34f-0LRQp1Ce09hft6QGYWdg3gG7dzBYWkM
May 18, 2019 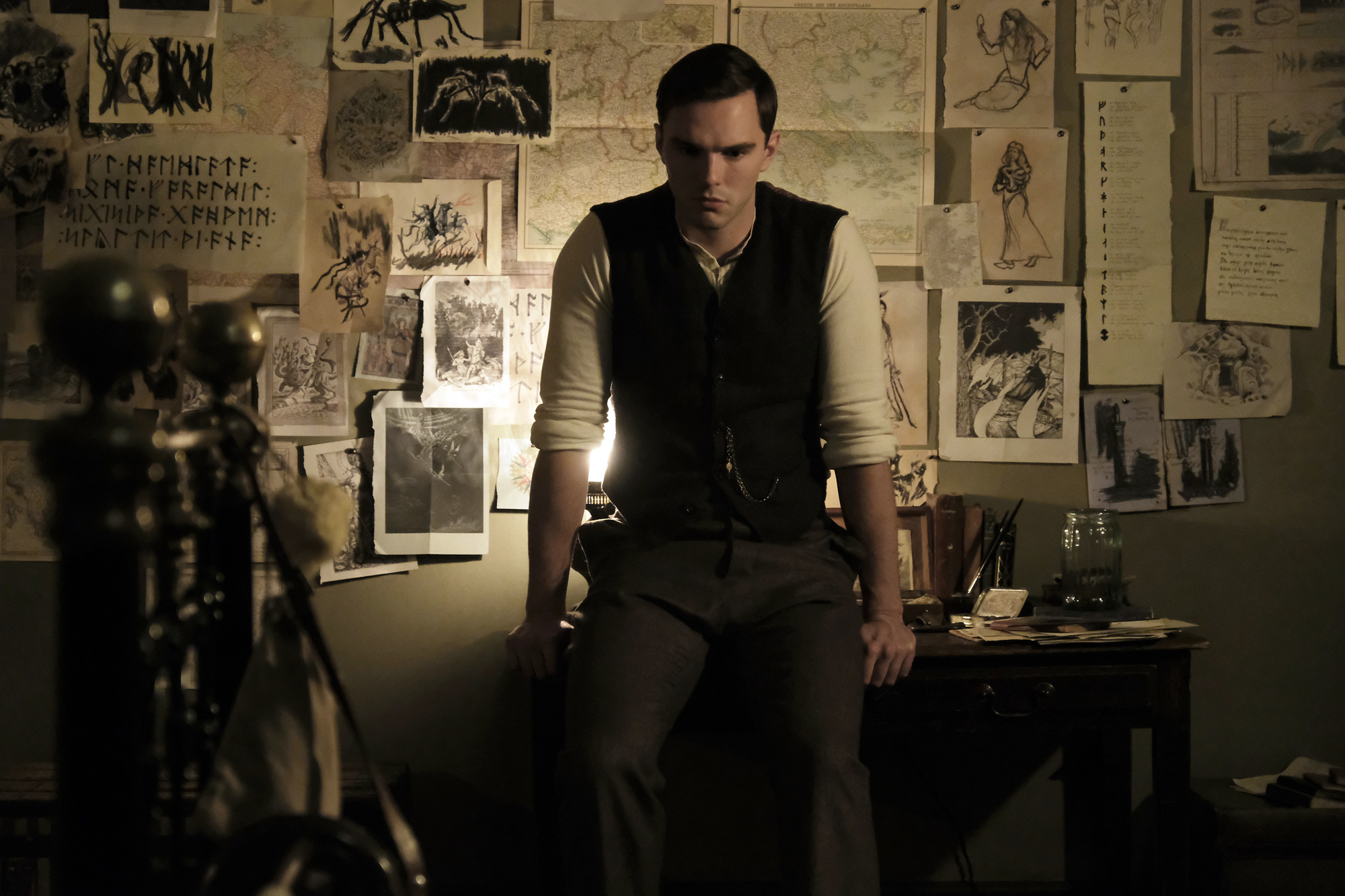 
I have a confession to make. Indeed, I need to make an apology. A few weeks ago, I wrote an essay entitled “Wormtongue’s Revenge”, in which I expressed my fears and misgivings about the new film, Tolkien, which focuses on the writer’s youth. I was concerned that the film would convey a homosexual and anti-Catholic agenda, weaving a fabric of lies of which Wormtongue himself would be proud. I cited the track record of the two screenwriters, David Gleeson and Stephen Beresford, and predicted the worst. “I might be wrong,” I wrote, “and will happily apologize to Messieurs Gleeson and Beresford should this be the case.” I should have added that I hoped to be proven wrong. I am, therefore, very happy to make the apology.
My fears about the film were assuaged by a couple of good and trusted friends who wrote to me after they had seen it.


“I had long shared your fears that a Tolkien biopic might make Fr Morgan into an ogre,” wrote the first friend, “but this one did not.” On the contrary, my friend continued, the priest who was the orphaned Tolkien’s legal guardian, “comes across, especially towards the end, as a father figure to Tolkien, which is definitely accurate”. My friend praised the acting of Nicholas Hoult as Tolkien, who had Tolkien’s “eccentricity and his mumbling speech pattern down to an art form”, concluding that he had enjoyed the movie much more than he had expected and expressing his hope that I would go and see it.
The other friend wrote to say that he and his wife had gone to see the film with my scathing prophecies in mind “and were mostly pleasantly surprised at the lack (as far as we could tell) of any homosexual agenda”. Far from such an agenda being evident, my friend reassured me that “the main emphasis of the movie was, in fact, the love story with Edith”. He continued to praise other aspects of the film:

The Somme scenes brought attention to the loss of wartime poets and a composer, which I thought might please you. Also, Tolkien was delirious on the battlefield at one point, and he saw visions of demons rising out the flames of bombs, and then a vision of Christ on the cross, as a kind of antidote, which pleasantly surprised us. The priest who raised him was portrayed as manly and firm, acting in his best interest to delay the marriage and who then blessed the marriage and praised Edith, when Tolkien had come of age, showing it had been the right thing to wait and the priest’s motives pure.

My friend concluded by stating that “the biggest sins of the film, were of omission”. He baulked at the suggestion, implicit in the film, that the central message of The Lord of the Rings was “fellowship,” without any suggestion that such fellowship had any deeper Christian meaning beyond male camaraderie. “I would say,” my friend concluded, “that it is not a film you should be afraid to see due to obvious problems”, adding that “it would be wonderful to read your review, if you do care to write one”.
With such endorsements from trusted friends, I rushed off to see the film.
The theatre was largely empty, which would have pleased me had my predictions proved correct, but which now saddened me as I began to warm to this warm-hearted dramatization of Tolkien’s early life, wishing that more people could see it.
The depiction of the idyllic life in the Shire-like Warwickshire countryside, with scenes of the young Tolkien and his friends playing in the woods, was juxtaposed to great effect with the family’s moving to the industrial slums of Birmingham, where the belching fumes and filth of the city’s factory chimneys reminds the viewer insistently and allusively of the scarred landscape and polluting stench of Mordor and Isengard. Tolkien’s mother is portrayed well, as is Tolkien’s closeness to her, but it is the characterization of Fr. Francis Morgan which surprised me most. There’s none of the anti-Catholic bigotry that one has come to expect in the characterization of priests in contemporary cinema. He shines forth as a compassionate father-figure, which is how Tolkien described him in his letters, who has Tolkien’s best interests in mind at all times, even and especially at those times when he appears most harsh, such as his decision to forbid Tolkien from seeing Edith.
As for Edith, the fellow orphan with whom the teenage Tolkien falls in love, she is shown to be feisty and highly cultured, which works in terms of the love story being told on the screen but lacks consistency with the real Edith whom Tolkien married, who was uncomfortable in the intellectual and academic circles in which her husband moved. The on-screen Edith is reminiscent of the characterization of C. S. Lewis’s wife, Joy Davidman, in the Hollywood version of Shadowlands, in which Debra Winger plays her as a feminist who is much smarter than Lewis’s male academic companions. In much the same vein, Lily Collins’s portrayal of Edith shows her as being much smarter than Tolkien’s male friends, and smarter than Tolkien himself. She is not only his Muse, which corresponds with the real Edith’s serving as the inspiration for the elven princess Lúthien Tinúviel, but is also his mentor, teaching him how to use his imagination fruitfully. Such tampering with the facts is within the realm of poetic license, however, and does not prevent the willing suspension of disbelief which is necessary if the film is to be enjoyed as a good story. It is, therefore, important to see it as a story based loosely upon historical facts and not as a documentary purporting to be objectively accurate in all respects. In short and in sum, this is a good yarn but a bad biography; indeed, it is a good yarn because it is a bad biography!
The homosexual agenda is inserted incognito in the characterization of Tolkien’s friend, Geoffrey Bache Smith, but in such a subtle manner that only the cognoscenti will notice it. Needless to say, there is no evidence that the real Geoffrey Bache Smith had such inclinations. Equally subtle and much more edifying are the allusions to Tolkien’s later life, especially his friendship with C. S. Lewis, in shots of Magdalen College, at which Lewis, Tolkien and their fellow Inklings met each week, and of Addison’s Walk, the footpath along the river on which Tolkien convinced Lewis of the truths of Christianity, laying the foundations for the latter’s conversion. There’s also a reference to the Eagle and Child, affectionately known by Tolkien and Lewis as the Bird and Baby, the pub in which they met with friends each week to wax lyrical and convivial on all matters pertaining to culture. Also refreshing was the relatively cerebral nature of the story, in which the importance of Tolkien’s academic work in the field of philology is treated with the necessary gravitas, and in which the role of the Church and its liturgy in comforting the afflicted is addressed with dignity.
On a less edifying note, it is true, as a reviewer in the Catholic Herald complained, that Tolkien’s Catholic faith is largely airbrushed out. The impression is given that Fr. Morgan’s presence is a consequence of the faith of Tolkien’s mother, whereas there’s no suggestion that Tolkien was himself a believer. On the contrary, the odd raised eyebrow at something that the priest has said gives the impression that the young Tolkien did not share his mother’s faith. There is, furthermore, no suggestion that Tolkien served Fr. Morgan’s Mass daily, nor that he would remain a lifelong practicing Catholic, still less is there any indication that The Lord of the Rings is, as Tolkien insisted, a “fundamentally religious and Catholic work”. And yet, laying these quibbles aside, there is no doubt that this is a good film with an adroitly crafted storyline, bereft, thankfully, of the poisonous wormtongued agenda that I feared it would have. It seems, therefore, as Treebeard might say, that I have been too hasty in my judgment. For this faux pas I offer my most heartfelt apology, adding that I have seldom been more pleased to be wrong.
Posted by jtf at 6:17 AM