The Pope Is The Problem 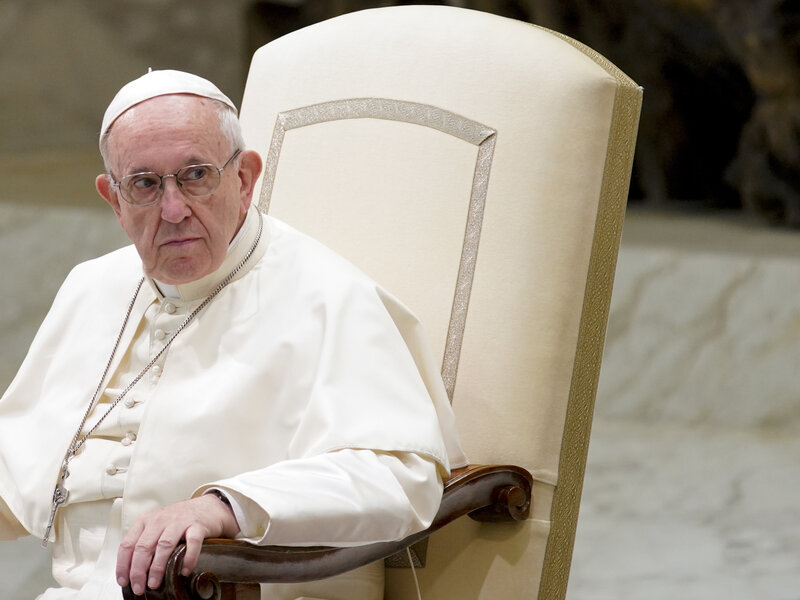 Stunning news from the US Catholic bishops’ meeting in Baltimore:

The bishops of America’s 196 Catholic dioceses and archdioceses gathered in Baltimore on Monday morning, meeting for the first time since sexual abuse scandals rocked the church in the summer. They planned to vote on measures to tackle the crisis and prevent further crimes.
In the opening minutes of their meeting, the bishops heard a surprising report: Pope Francis had asked them not to vote on any of their proposals.
The pope does not want U.S. bishops to act to address bishops’ accountability on sexual abuse until he leads a worldwide meeting in February of church leaders, the president of the U.S. Conference of Catholic Bishops, Cardinal Daniel DiNardo, told the gathered bishops as the meeting opened Monday morning.
“At the insistence of the Holy See, we will not be voting on the two action items,” DiNardo said. He said he was “disappointed” by the pope’s directive.
Anne Barrett Doyle, co-director of BishopAccountability.org, called the last-minute order from the Vatican “truly incredible.”
“What we see here is the Vatican again trying to suppress even modest progress by the U.S. bishops,” said Doyle, whose group compiles data on clergy abuse in the church. “We’re seeing where the problem lies, which is with the Vatican. The outcome of this meeting, at best, was going to be tepid and ineffectual, but now it’s actually going to be completely without substance.”

Read the whole thing to see what the papal nuncio told the bishops this morning. Jaw-dropping.
Any illusions that Francis was part of the solution to this crisis should now be dispelled. He is the chief stonewaller. Archbishop Viganò told us so.
As I’ve been writing since visiting Rome earlier this autumn, the atmosphere in the Vatican is one of siege and denial. One has the impression that Francis is like Pius IX, desperately trying to defend the Papal States — except in Francis’s case, he’s trying to defend the Church’s ability to control events — and, let’s be honest, to cover up for priestly buggery and episcopal corruption. It’s as if Uncle Ted were sitting at his right side, Wormtonguing all the livelong day.
What must it feel like to be a faithful Catholic mother and father this morning, knowing that even 16 years after Boston, and mere months after learning that a senior American cardinal was in fact a serial molester, the Holy Father does not take the abuse crisis seriously? For heaven’s sake, the US Catholic Church is facing a federal RICO investigation! And still, the pontiff punts. If you read the nuncio’s quote, you’ll see that the Pope does not intend to give the laity any say in the reform that the Catholic bishops have manifestly been unable to carry out.
From Barbara Tuchman’s The March Of Folly, this passage on how six Renaissance popes provoked the Protestant Reformation:

The folly of the popes was not pursuit of counter-productive policy so much as rejection of any steady or coherent policy either political or religious that would have improved their situation or arrested the rising discontent. Disregard of the movements and sentiments developing around them was a primary folly. They were deaf to disaffection, blind to the alternative ideas it gave rise to, blandly impervious to challenge, unconcerned by the dismay at their misconduct and the rising wrath at their misgovernment, fixed in refusal to change, almost stupidly stubborn in maintaining a corrupt existing system. They could not change it because they were part of it, grew out of it, depended on it.

Can there be any doubt? PF is a liar, a hypocrite, a fraud, radically corrupt, and gravely, gravely wounding the Church of which he is head.
I am beside myself with anger right now. PF is more interested in showing his supposed ‘enemies’ who’s boss than he is in dealing with evil. He is more interested in preserving his image and his friends, than in seeking truth. He is all about himself at this point, completely blinded to the needs of others. He hides his corruption and bankruptcy and pride behind a patina of ‘synodality’ and ‘humility.’
My only hope is that Christ will use him to scourge the Church and bring about its renewal. We must suffer the death-pangs of an ecclesial era that we have allowed to fester for decades. Pope Francis is both a cause and a symptom. He is a disgrace to every victim of abuse and to every person committed to reforming the Church.

Obviously I am not going to reveal the name of this theologian — who, not coincidentally, is a father — but I tell you this: I bet he never, in his wildest dreams, imagined ever writing words like this about a pope. Yet here we are.
UPDATE.2: Here is a link to the text of the papal nuncio’s address.
Phil Lawler, whose brand-new book about the crisis is a must-read for concerned Catholics, weighs in:

Philip Lawler@PhilLawler
Or one might say it seems the Vatican doesn't *want* a full independent study of the mess, which could uncover unpleasant facts about....the Vatican?
Mark Brumley@mabrumley
@mabrumley And at the last minute. It almost seems as if Rome is going out of its way to confirm the negative stereotypes. Once again, a self-inflicted wound on the Church's credibility. It almost looks as if Rome doesn't *want* the US bishops to get their act together. https://twitter.com/canonlaw/status/1062005808832151553 …
201
11:29 AM - Nov 12, 2018
Twitter Ads info and privacy

94 people are talking about this Speaking before the conference session had even been called to order, DiNardo told the bishops he was clearly “disappointed” with Rome’s decision. The cardinal said that, despite the unexpected intervention by Rome, he was hopeful that the Vatican meeting would prove fruitful and that its deliberations would help improve the American bishops’ eventual measures.
While DiNardo was still speaking, Cardinal Blase Cupich of Chicago intervened from the floor, expressing his support for the pope.
“It is clear the the Holy See is taking the abuse crisis seriously,” Cupich said. At the same time, he suggested that the work which had gone into preparing the two proposals should not go to waste.
Cupich suggested that if the conference could not take a binding vote, they should instead continue with their discussions and conclude with resolution ballot on the two measures. This, he said, would help best equip Cardinal DiNardo to present the thought of the American bishops during the February meeting, where he will represent the U.S. bishops’ conference.

That’s actually not a bad idea. Make Francis own this terrible decision.
UPDATE.5: On the other hand:
James Martin, SJ ✔@JamesMartinSJ
Why would the Vatican ask the US Bishops to delay their vote on sex abuse? 1) To wait for the worldwide meeting so the moves will be more universal 2) They want them to be stronger than what the expect the US bishops would vote on. 3
America Magazine ✔@americamag
Vatican tells U.S. bishops to delay votes on new sex abuse protocols https://www.americamagazine.org/faith/2018/11/12/vatican-tells-us-bishops-delay-votes-new-sex-abuse-protocols …
82
11:50 AM - Nov 12, 2018
https://platform.twitter.com/widgets.js
Well, maybe. But you know, there were actually people who convinced themselves that John Paul II had a secret plan to defeat the scandal, and if everybody just calmed down and trusted the Pope, everything would work out.
UPDATE.6: Church chronicler Rocco Palmo points out that Pope Francis didn’t want the bishops meeting this November anyway. It beggars belief to think that Francis had canonical problems with the US bishops’ proposals, but only sprung it on them the morning they were gathering to talk about the proposals. And, the Pope has known since this summer, when his very good friend Ted McCarrick was outed as a molester, that the American episcopate was in crisis. Recall that he kept USCCB chief Cardinal DiNardo cooling his heels for weeks, despite DiNardo’s urgent request for an audience.
I don’t know what Francis’s game is here, but he long ago surrendered the benefit of the doubt.
Posted by jtf at 8:38 AM