Did Nationalism Cause World War One? 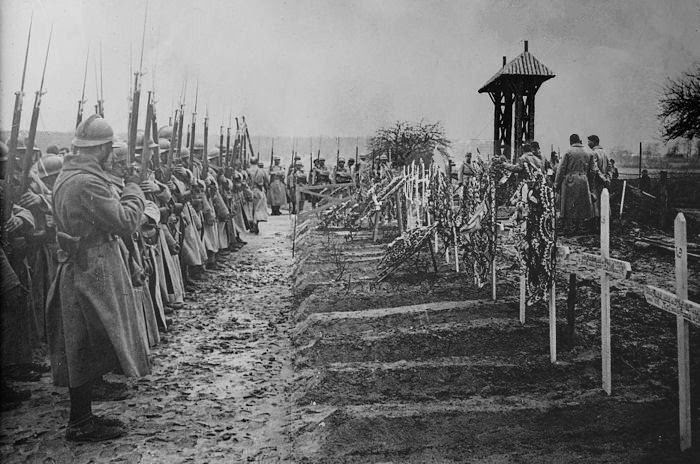 French burial ceremony near the Front.

The French say many silly things, along with a few wise ones, although since the deaths of Voltaire, Descartes, and la Rochefoucauld, not lately. One of the silliest came out of the mouth of M. le President, Emmanuel Macron, at the centenary observance of the end of World War I on November 11. Calling nationalism a “betrayal of patriotism,” the fey popinjay went on to caution the world against “old demons coming back wreak chaos and death.”
The media, of course, loved it, promptly casting Macron’s words as a “rebuke” to (who else?) Donald J. Trump and his soul mate, Vladimir Putin, who were both in attendance. Far from fighting for the survival of the French nation in 1914, said Macron, the French soldiers were fighting for the “universal values” because—get this—“patriotism is exactly the opposite of nationalism.” This statement ignores all the contemporary evidence from a century ago outlining the patriotic motives that moved the French and British soldiers who went to war against the Kaiser; all you have to do is read the poetry of Wilfred Owen or Siegfried Sassoon, or read Robert Graves’ classic memoir, Goodbye to All That.
The French had only recently lost the Franco-Prussian War, which saw German troops dining in Paris even before there was a united Germany. The war brought about the end of the Second Empire in France, finished France’s post-Napoleonic hegemony in continental Europe, and, under Bismarck’s leadership, resulted in the unification of the various German cities, states, and principalities in 1871. Indeed, the Franco-Prussian War completely rearranged the map of Europe, as France’s defeat led to the end of Napoleon III, the foundation of the Third Republic, the creation of modern Germany, and the absorption of the Papal States into a newly unified Italy as well.
This, then, was the backdrop against which World War I was instigated and fought. Among other things, the French were fighting not for “universal values” but for national pride, which included the return of the twin provinces of Alsace and Lorraine, long a tug-of-war between France and Germany. A complicated series of alliances and ententes (Italy, of course, somehow managed to get on both sides and emerged from the war with the South Tyrol of Austria as its participation prize) ensured that what started when the Germans attacked France through neutral Belgium did not long stay in the Lowlands, and before it was all over, Romanov Russia vanished, the Ottoman Empire in the Middle East dissolved, the principal belligerents had all been bled white in the carnage, and the United States, reluctantly, emerged as the new leading power in the West.
The notion that “nationalism” is a form of racism (for that is where the Left is heading on this one) illustrates the linguistic mechanism by which cultural Marxists subtly change the color of our political discussions. Embarrassed by their inability to squirm away from the “Socialist” part of the name of Adolf Hitler’s political party, they’ve chosen instead to concentrate on the “National” bit and implicitly therefore—and now explicitly—to tie concepts of patriotism and nationalism to the Nazis. In much the same way, the now-offensive but once harmless word “stereotypes” was first modified with “negative” (to distinguish it from “positive” or neutral stereotypes) and thus took on a negative connotation, to the extent that “stereotypes” today are assumed to be wholly unflattering.
Which is why the president was right to push back against the pipsqueak when he retorted via a nuclear Tweet:

Emmanuel Macron suggests building its own army to protect Europe against the U.S., China and Russia. But it was Germany in World Wars One & Two - How did that work out for France? They were starting to learn German in Paris before the U.S. came along. Pay for NATO or not!


French ingratitude is legendary, and all part of the fun of traveling in Europe. More ominous was Macron’s call—soon echoed by his superior officer, German chancellor Angela Merkel—for a “European army” that somehow would defend both against the Russian bear and the American eagle while “complementing” NATO. While we’re on the subject, we’ve seen pan-European armies before, during the Thirty Years War, the Napoleonic Wars and even as recently as World War II, when Finnish, Hungarian, Romanian and Italian units fought alongside the German Wehrmacht. How well did that work out?
In Macron’s and Merkel’s view, Europe can no longer count on the United States for its protection. Why that should be is unclear: American war-fighting doctrine has not changed substantially in this century, and Europe’s security is still a major focus of American concern. To translate from the original German, what Merkel means is that she can no longer count on Donald Trump, and that America’s turn rightward in the last presidential election has put her nose out of joint, just as she’s on the way out the door herself.
Merkel is a short-timer, and the next German government won’t look a thing like the ones she’s headed for the past umpteen years. Rising German nationalism is not to be equated with National Socialism, nor is the reawakened nationalism of the former “captive nations” of Central and Eastern Europe, which were among the worst affected by World War I. Poland, Hungary, and the other states lying at the crossroads of Europe were conquered (and not always by Europeans), dismembered, stitched together, stuffed into unworkable portmanteau (hello and goodbye, Yugoslavia) and reconstituted: what kept them alive were their cultures, their languages, and their long histories as unique peoples. During the Communist period, we applauded their pluck and prayed for their futures; it was, after all, a Polish Pope who helped bring down the Evil Empire. Now the Left sees revanchism everywhere.
The “old demons” of Macron’s fears are not nationalistic. The history of Europe is, in fact, the history of groups of people coming together as nations (Germany, Italy), or splitting artificial political entities (the Soviet Union) back into their component parts. Rather, the demons are the Marxist and other Socialist millenarians who, since the middle of the 19th century, have promulgated their pernicious one-worldism, first as the dictatorship of the proletariat, then as ein Volk, ein Reich, ein Führer, the Soviet occupation and the fiction of the Warsaw Pact, and finally as the European Union—a kind of USSR-lite, but one centrally run from Brussels instead of Moscow, with an army of bureaucrats to keep its restive member states, farmers, workers, and peasantry in line.
Nationalism? Europe could do with more of it, not less. For the first step in getting along is to acknowledge differences, not paper over them or repress them—and then muddling through as best we all can toward common peaceful goals. Europe’s already had enough of chaos and death; time to put aside the “unifying” dogmas of the past two centuries and try something so old it’s new again: freedom and the right of self-determination.
Posted by jtf at 9:02 AM