Catholic Bishops Beg for a Clear Policy against Evil A few cardinals have roused themselves to respond to the month-old press disclosures that Cardinal Theodore McCarrick is a pederast, whereas before he was merely well known as a serial sexual harasser. Their response is depressing in the extreme and should make any Catholic or person of good will wish for their immediate, tearful confessions of fault, and their resignations of high ecclesial office.
Before mainstream media outlets finally reported on his lewd and criminal behavior, McCarrick was the face of the American episcopacy’s response to the sex-abuse crisis in 2002. His lewd behavior with seminarians was an open secret among priests and informed laity. Expert witnesses in priest-abuse cases, such as Richard Sipe, had long ago publicized what they knew of the behavior of “Uncle Ted.” A concerned group of laity and clerics pleaded their case against him in Rome before his elevation to the College of Cardinals. Churchmen across the country who didn’t call him “Uncle Ted” with affection or disgust had another nickname related to his proclivities: “Blanche.”
American bishops now facing questions about what they knew and when have had to choose between looking clueless or complicit. So far, they are choosing the former. They are not, however, very persuasive in presenting themselves as ignorant of the rumors.
So let’s review what these churchmen have said and ask some questions about their responses to these “revelations.”
First, there is Cardinal Kevin Farrell, who was a protégé of Cardinal McCarrick’s. Farrell shared an apartment with McCarrick for six years, years in which settlements were being paid out in New Jersey for McCarrick’s misdeeds. In a brief interview, Cardinal Farrell said, “I was shocked, overwhelmed; I never heard any of this before in the six years I was there with him. . . . I worked in the chancery in Washington and never, no indication, none whatsoever.” He didn’t mention his living arrangements. But nothing in Cardinal Farrell’s deportment suggests shock, disgust, or embarrassed bewilderment. His expression is one of a man getting through an unpleasant and official line on his actions.
Farrell was also once a senior figure in the Legionairies of Christ, led by sexual abuser, bigamist, and pederast Marcial Maciel. Farrell left, he’s said, over differences in philosophy. What a life! To have been twice put in the best place to know what, at that level, “everyone knows,” and yet to have known nothing. Why should such a clueless man be elevated to the office of cardinal and given a curial position? Why should a prelate whose sense of the Church is so deficient that he resoundingly declared of the abuse crisis in 2002 that it was “over” be in charge of the World Meeting of Families in Dublin this year? If anyone comes forward with credible evidence that Cardinal Farrell did in fact know about McCarrick’s relationships with seminarians, will he resign his offices?
Next there is Boston's Cardinal Sean O'Malley. Yesterday he issued a long statement about the matter. In part, read:

These cases . . . raise up that fact that when charges are brought regarding a bishop or a cardinal, a major gap still exists in the Church’s policies on sexual conduct and sexual abuse. While the Church in the United States has adopted a zero tolerance policy regarding the sexual abuse of minors by priests we must have clearer procedures for cases involving bishops.

In other words, he blames this on a policy that he and his brother bishops wrote to deliberately exclude themselves from accountability in 2002.
He continues:

It is my conviction that three specific actions are required at this time. First, a fair and rapid adjudication of these accusations; second, an assessment of the adequacy of our standards and policies in the Church at every level, and especially in the case of bishops; and third, communicating more clearly to the Catholic faithful and to all victims the process for reporting allegations against bishops and cardinals.

Specific actions: adjudication, assessment of standards, and communicating to Catholics a process for reporting allegations. The last implies that the problem with Cardinal McCarrick lies partly with the flock’s inability to bleat correctly while the wolves devour them. This is all bloodless bureaucrat-ese. Bishops knew about McCarrick and chose to do nothing. Confronted with the reality, they do not accept responsibility, they do not promise to boldly confront evil. They cry out for more policies that would help them avoid direct confrontation.
What is most shameful is how Cardinal O’Malley addresses his own state of knowledge. Father Ramsey of New Jersey, a priest in good standing, had written about McCarrick to O’Malley’s office for the Protection of Minors, and he received in return what amounted to buck-passing boilerplate about how offenses against adults aren’t handled by O’Malley’s office.
O’Malley writes of this event:

Recent media reports also have referenced a letter sent to me from Rev. Boniface Ramsey, O.P. in June of 2015, which I did not personally receive. In keeping with the practice for matters concerning the Pontifical Commission for the Protection of Minors, at the staff level the letter was reviewed and determined that the matters presented did not fall under the purview of the Commission or the Archdiocese of Boston, which was shared with Fr. Ramsey in reply.

Notice how lawyerly this language is. O’Malley says he did not “personally receive” the letter. An interesting bit of rhetoric. On the surface, it allows one to conclude that O’Malley simply never knew about it. But O’Malley does not say whether staff discussed with him the contents of the letter and the contents of his office’s response to the letter. In fact, it is preposterous to believe that a matter so sensitive as grave accusations against one of the most notable churchmen in his country would be handled entirely by staff without his knowledge.
O’Malley’s official reputation, the one he is anxiously guarding, is that he is punctilious about accusations of sexual abuse. His real reputation is one as a zealous micro-manager of his own reputation. O’Malley surely had heard of the rumors about McCarrick’s behavior with seminarians, and he surely knew that McCarrick chose to live his retirement on the grounds of a seminary, where he would have access to young candidates for the priesthood, when his office received these complaints. Did he do anything with the knowledge of the complaint besides send back a form letter washing his hands of the situation? If his judgement allowed him to wave away such a grave situation, what good will better policies do?

My office doesn’t have a policy against plunging hammers into the necks of my colleagues. But my co-workers would not excuse themselves from the duty to stop me from doing this by citing the absence of such a policy in a rulebook, or by explaining that their job description did not explicitly include language about hammer-wielding colleagues. O’Malley is blaming his lack of action on a lack of policy, when the problem is a fear of confrontation, insufficient zeal, or — most likely of all — his moral compromise and passivity in the face of a well-known culture of sexual abuse, blackmail, and moral impunity within the Catholic episcopacy.
He’s not the only one who has to answer tough questions. Cardinal Wuerl said last month that he had reviewed the records of the Washington, D.C., archdiocese. “Based on that review,” he concluded, “I can report that no claim — credible or otherwise — has been made against Cardinal McCarrick during his time here in Washington.”
Some questions for Cardinal Wuerl might go something like this. The Vatican’s representative in Washington, D.C., knew about the legal settlements for McCarrick in 2004; when were you informed of them? If you were informed of these settlements, did you take that into consideration when Cardinal McCarrick requested to live in different seminaries that train priests for your diocese? If you did not know about them, did Bishop Joseph Tobin or his predecessors in Newark have a duty to inform you of them, given McCarrick’s living arrangements? Why, near the end of the last decade, was McCarrick suddenly asked to leave the seminary at St. Thomas Woodley Park under Father Roderick McKee?

Further, you are the American on the Congregation of Bishops in Rome? It’s widely reported that McCarrick’s lobbying for certain candidates for elevation in the Church was important. How many times did you receive him for an audience on these matters? What was the weight of his word in your own recommendations for Joseph Tobin, Kevin Farrell, and Blase Cupich? If you knew of these settlements, why did his word have any weight with the congregation and with the Vatican? 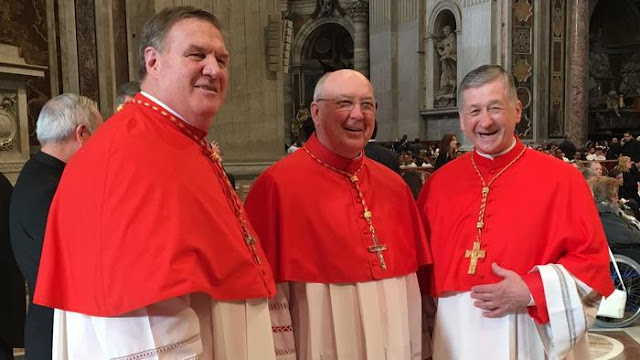 Joseph Tobin, Kevin Farrell, and Blase Cupich
I don’t expect answers to these questions. But as a Catholic, I would find it satisfying to at least watch these men squirm or sweat while they lie to us, rather than delivering their lines in great comfort and an atmosphere of deference.


Reporters could also cut to the chase. Do you know of bishops who are sexually active? Are you sexually active? They should dig through the same “everybody knows” rumor mills that had accurate information on Cardinal McCarrick. Ever hear anything funny about Cardinal Edward Egan? About parties that Cardinal Law hosted? About Cardinal Bernadin? What about the reputation of the Mundelein Seminary?
A spokeswoman for the diocese of Metuchen said that she had spoken to Cardinal Tobin and that he “has expressed his intention to discuss this tragedy with the leadership of the United States Conference of Catholic Bishops in order to articulate standards that will assure high standards of respect by bishops, priests, and deacons for all adults. ”
An expressed intention to articulate standards endorsing high standards. Let them eat standards. This is the moral imagination and moral vocabulary of Cardinal McCarrick’s peers in the Church. They need new policies to confront predators; the fear of perdition doesn’t move them to do so. Nor does respect for the seminarians or their congregants. Nor does self-respect. The reaction of the cardinals goes some way toward explaining how a man like McCarrick flourished in their ranks.
Posted by jtf at 5:23 AM