A Tale of Two Killings


Chicago erupts in violence over a police shooting, but no outrage attends the far more typical killing of a bystander by a murderous felon. 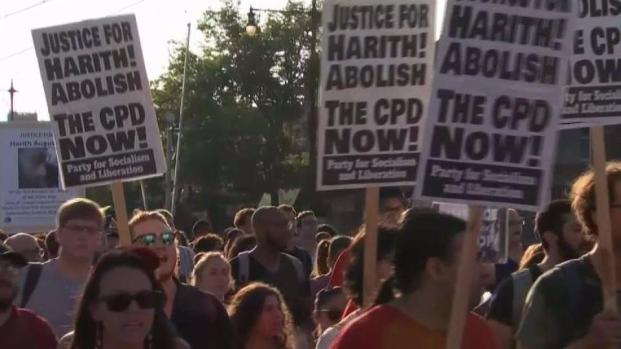 Protests on July 16, 2018 (www.nbcchicago.com)
Last Sunday, a 59-year-old woman on the West Side of Chicago was killed by a would-be carjacker. The felon walked up to the driver’s side of the car, which was being driven by a 71-year-old man, and pulled his gun. The senior citizen refused to surrender the vehicle and kept driving. The would-be carjacker opened fire at the car, striking the woman in the head and killing her.
The night before, on the South Side, a Chicago officer killed a 37-year-old man whom the officer’s patrol partners had observed behaving in a manner suggesting that he was carrying a gun. The officers tried to question Harith Augustus, and he appeared to pull something from his wallet, according to police body-camera footage, possibly his firearms owner-identification card. One officer tried to grab Augustus (the police report said that he became combative), but he pulled away and ran into the street, where he appeared to reach for the gun holstered on his right hip. One of the officers opened fire and killed him. Augustus’s gun was recovered at the scene.
True to script, the officer-involved shooting sparked violent street anarchy on Saturday night, instigated by Black Lives Matter, the Chicago Alliance Against Racist and Political Repression, and other anti-cop activist groups. Protesters threw rocks and bottles, some filled with urine, at officers. Four officers were injured. Chants included “How do you spell racist? CPD [Chicago Police Department],” and “Murderers.” Protests have continued, drawing intense local media and political attention. “This department is racist . . . and we’re tired of it,” said one of the organizers.
There were no protests against the taking of the carjacking victim’s life. Carjackings have nearly tripled in Chicago since 2015, averaging two per day in 2017 and close to that in 2018. In August 2016, officers tried to pull over a car involved in an earlier carjacking; someone inside the car opened fire and hit one of the officers in the face. The shooter was on parole for attempted armed robbery. In January 2017, a teen carjacker ambushed a 34-year-old mother in an alleyway where she had been parking her car. His initial blow to her head with his gun was so severe that it temporarily blinded her. “Quit trying to kick back, you white bitch,” the assailant said as he pistol-whipped her. Before the attack, the mother had noticed a van suspiciously idling in the alleyway, but decided to continue about her business, likely second-guessing herself about “racial profiling.” In March 2017, a man with a gun forced a 24-year-old woman into the trunk of her car and raced it around the South Side until crashing into a tree. In August 2017, a 28-year-old entrepreneur and student was fatally shot in his car when he refused to hand it over to the carjacker. In November 2017, a pair of thugs accosted an 88-year-old man and stole his Lincoln at gunpoint. They almost immediately crashed into a semitrailer truck and retaining wall; one of the two felons died in the crash.
In the first six months of 2018, more than 60 children under 15 have been shot in Chicago. In June alone, an 11-year-old boy was shot in the head; a 12-year-old girl was killed as she was carrying her baby cousin; and a 14-year-old boy was gunned down by a passing car. Black Lives Matter activists have nothing to say about this violence because it does not involve police officers. Officer-involved shootings are a minute fraction of Chicago’s ongoing carnage—in 2016, they made up 0.5 percent of all shootings in the city. The foot patrol that accosted Augustus was in the neighborhood—the CPD’s Third District—because the local alderman, residents, and business owners had requested greater police protection. The area had seen an increase in open-air drug deals. So far this year, there have been 69 shootings in the Third District, a little under a dozen a month, 15 of them fatal. A witness reported to the Chicago Sun-Times that Augustus was selling “loosies”—single untaxed cigarettes—a practice that shop owners loathe for its contribution to an atmosphere of street lawlessness.
Black Lives Matter has thankfully lost its sounding board in the White House. But at the local level, away from the Resistance-obsessed national media radar screen, its anti-cop poison continues to distort policing and police-community relations. It is a tragedy for Augustus’s family and acquaintances that he lost his life; the shooting must be thoroughly investigated. If any tactical changes are needed to lessen the risk that a police encounter escalates into the use of lethal force, they should be implemented through rigorous hands-on training. But the officers were right to approach an apparently armed man, especially given the area’s record of shootings. Such proactive policing has dropped precipitously in Chicago, resulting in a sharp rise in violent crime since 2014. (Law professors Paul Cassell and Richard Fowles empirically connect the drop in stops to rising crime in this 2018 paper.)
The anti-cop violence against the CPD for a shooting that, though deeply unfortunate, appears to be justified will further lessen officers’ willingness to intervene in suspicious behavior. A Chicago detective told me, in the wake of Saturday’s violence: “Those who care about law enforcement and a civil society cannot win against willful blindness and straight-up lies. This is an open civil war that goes quite beyond Chicago.” The demoralization of law enforcement continues, and it is the law-abiding residents of high-crime areas who will continue paying the price.


Heather Mac Donald is the Thomas W. Smith Fellow at the Manhattan Institute, a contributing editor of City Journal, and the author of The War on Cops and the forthcoming The Diversity Delusion.
Posted by jtf at 6:41 AM