Off the Shelf: What Catholic Traditionalists Foresaw


By Michale Brendan Dougherty
https://www.nationalreview.com/2018/06/off-the-shelf-books-catholic-traditionalism-jihad-in-the-west/
June 29, 2018
Editor’s Note: Every week, Michael Brendan Dougherty writes an “Off the Shelf” column sharing casual observations on the books he’s reading and the passing scene.
My family drove back from our brief trip to Maine early Monday morning.
I’ve been reading through a collection of essays, The Best of “Triumph,” which pulls together the notable contributions to a reactionary Catholic periodical from the 1960s and 1970s. The introduction to the collection asks whether Triumph wasn’t a natural ally of the conservative movement. Hadn’t its founder, Brent Bozell, co-authored with William F. Buckley Jr. a defense of Senator Joe McCarthy? Hadn’t he worked closely with Goldwater? The answer is stark. “In the history of a magazine that habitually confounded expectations and surprised, even shocked its readers, nothing was more confounding than Brent Bozell’s decisive severance of himself andTriumph from the conservative movement.”
Bozell's arguments against conservatives are merely folded into his larger argument with modernity. In some ways he foreshadows the arguments made more recently by Patrick Deneen. Bozell urged readers to discard the illusion of a a dialectic between conservatism on one side and liberalism on the other. “Is it not clear that what we are dealing with here is not two corpses, but one? What is being discarded by history is a whole approach to man and to politics.” Bozell wants to dispel the other illusion, “that politics — the ordering of the public life — can proceed without continuing reference to God.” Bozell wanted a public life ordered such that it would “help a man be a Christian”.


You would often find, however, that Triumph is not so far from National Review as the introduction imagines. There in its pages, as in ours, is Erik Maria Ritter von Kuehnelt-Leddihn. The number of times that Jean-Jacques Rousseau is called into the dock in this volume nearly equals Jonah Goldberg’s effort in Suicide of the West.
The book is a beautiful specimen of traditionalist Catholic publishing. That is, it is massive, has long stretches of white space, and the typography has odd errors. Some pages in my editions are rendered in entirely bolded text. But it has its gems. In these pages the great historian Christopher Dawson writes of the Catholic Church as “this majestic superhuman reality.”
At this point, to be totally honest, I think modern American society does drive people to become Christians. Which is different from “helping” them to be Christians, I suppose. At the same time, I’m nearly despairing of the Church’s ability to keep men Christians. I can’t quite shake the anger I feel when I read about the now-acknowledged depredations of Cardinal Theodore McCarrick.
I thought I was already inured to the moral rot in the Catholic clergy. I’ve been briefed about the machinations in some important urban dioceses, where bishops subtly encourage the death of the parishes located on prime real estate so that the Church can close them and sign lucrative 99-year leases with property developers. My family knows of the parishes that have an internal reputation so notorious that they get nicknames. A certain St. Matthew’s becomes “St. Mattress.” And so on.
A friend who left the seminary - to morally compromising, he thought — once told me of a legendary story in his diocese. A recently ordained priest was assigned to a parish with a pastor who liked putting on rather decadent parties in the parish house. This new priest complained to his bishop about it. The bishop brushed him off. But word of the complaint leaked around the diocese, and the pastor retaliated by having the newly ordained priest’s bed removed from his room and replaced with a Jacuzzi tub. The young priest called the bishop again. “I’m leaving,” he said. “Fine, fine,” the bishop relented, saying that he could give him a new assignment. “No,” the priest responded. “I’m leaving the priesthood.” That bishop has had a major promotion since, and is considered a stalwart conservative, with extensive contacts among conservative politicians. It’s a real possibility that he reads this website. I hope he reads this and for the first time in a long time really feels the cold grip of quiet panic.
The moral corruption is so deep and pervasive it becomes almost invisible by its omnipresence. It just flashes its icy look and smile on different faces. We see it in Pope Francis inviting Cardinal Godfried Danneels to participate as an elder statesmen in the Synods on the Family, though Daneels had helped cover up the abuse of a young man by Father Roger Vangheluwe, the victim’s uncle. We see it in the way disgraced men such as Cardinal Roger Mahoney are still allowed to haunt their diocese. Even Bishop Rembert Weakland, who embezzled funds from his diocese to pay off his lover. We see it in Miami, where the former archbishop had a side business selling Spanish fly. And this is just the most basic sexual and financial corruption. Undergirding both is a spiritual and intellectual corruption.
One of the remarkable things about reading Triumph now is the sense in its essays that the events they are witnessing in the late 1960s and early 1970s are cataclysmic for the Church and society. There is a sense that things cannot go on this way for long. But, in a way, they can and did. In fact, things are much worse than the editors imagined. Reading it has stolen some of the comfort I have taken by encouraging people to imagine a more sane Church and world in 50 years looking back on the present. And how shocking they would find the nadir it all came to in our times.
There is an undeniable psychological tension between my religious belief that I cannot have hope for salvation outside the visible, institutional Church and my honest conviction that of all the institutions and societies that intersect with my life, the Church is by far the most corrupt, the most morally lax, the most disillusioning, and the most dangerous for my children. In that tension, personal prayer will dry up like dew at noon.


Where do I find hope? I find it in the faces of other young Catholics. The families at my parish who make real sacrifices for the Faith. I find it in the young writers such as Sohrab Ahmari , B. D. McClay, and Matthew Schmitz who still convert and fall in love as I did. They could start Triumph, anew. Even if sometimes my personal piety dries into dust and nothingness, the bell rings at Mass, my knee drops to the floor, and if nothing else, this gesture testifies objectively to the reality that Christ is present in the Eucharist, that Christ is Lord. Hopefully for now, that’s all I need to know. 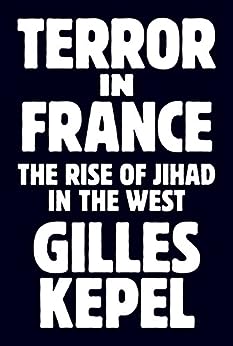 I’m also reading Terror in France: The Rise of Jihad in the West, by Gilles Kepel. It was a passionate book that took stock of the terrible year 2015, which began with a slaughter at the offices of Charlie Hebdo and ended with a massacre at the Bataclan. It was followed by the martyrdom of a Catholic priest, Jacques Hamel, in 2016. That year and those events in France set everything else in the West on their current trajectory.
The wave of terror, and the many connections it had to migratory routes that Angela Merkel had encouraged to grow, has bequeathed to us a whole new system of borders within Europe, populist governments rising in Austria and Italy, the near end of Merkel’s chancellorship, and Brexit. It may have even inspired enough Americans to pull the lever for Donald Trump who promised to ban Muslim migration and travel to the United States.
Kepel traces the terror back to the 2005 riots in France, the ones that announced a new generation of native-born Muslim youth. And in a 2005 manifesto, The Global Islamic Resistance Call, by Mustafa Setmariam Nasar, a Syrian Spaniard. It shifted the balance of Islamic terror, away from al-Qaeda’s old model of recruiting Middle Eastern terrorists to carry out spectaculars in the West, to looking within the “poorly integrated” Islamic youth of France. The idea was to take the struggle to Europe until its nations began to implode in the atmosphere of civil war. Those who answered the call left Europe to train as fighters in Iraq and Afghanistan, later Syria.
Kepel sees Islamic terror has a fundamental challenge to a French state and French society that is ill-equipped to meet it. French political and security institutions are more insular than those in Britain and America, he insists. I find this debatable. Like most liberal intellectuals, Kepel often looks beyond the blood in the street spilled by Islamists, to the blood spilled in his imagination, by fascist reactionaries who seize power later. The book is also marred by its final lame attempt to envision a France beyond the current apocalypse, one in which the French high school serves like the Church in St. John’s Revelation, a paradigm of a new heaven and earth. One doubts French schools are peaceful or so powerful as to be able to create a new France.
Overall, though, it is a challenging book, and I find it useful to engage in a more French way of looking at political events. American commentators are obsessed by the recursiveness of American history, and tend to place all their emphasis on what we are all already supposed to know. We tend to use political commentary to reinforce long-held ideas and notions, as if we are always looking at current events as riffs on the old familiar themes of history. Kepel, like many French commentators, tends to look for what is new and distinctive in the moment, what threatens to break out and reorder French assumptions and French life. It’s a livelier way of looking at the world.
The end of history never came. But, perhaps, the end of corruption does come as a necessity. The decay of the clergy cannot long survive in a world dedicated to stripping priests of their comforts, honors, and occasionally their lives. Is it too much to think that in Europe’s future Christian priests will be more drawn to the example of men like Jacques Hamel than to the sickening worldliness of men like McCarrick and Danneels? Hopefully, they won’t even have the choice.

The Buckley–Vidal Debates, 50 Years On

‘Bake the Cake’ and the Red Hen Controversy

Email ThisBlogThis!Share to TwitterShare to FacebookShare to Pinterest
Labels: Books and Things, Christianity, Islam and Terrorism