The McCabe Report is Just an Appetizer 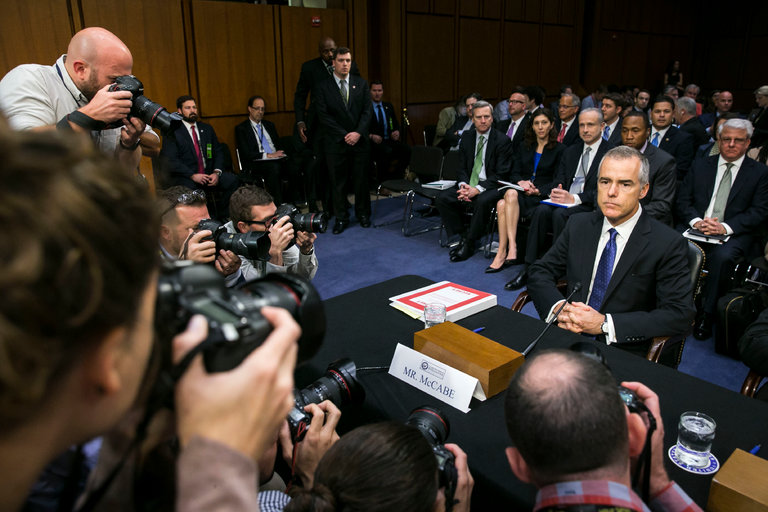 Al Drago/The New York Times
What a delicious hors d’oeuvre Michael Horowitz gave the world on Friday! The inspector general for Department of Justice finally issued his eagerly awaited (eagerly awaited by some of us, anyway) report on Andrew McCabe, the disgraced former deputy director of the FBI.
Note that this is only an appetizer. In the coming weeks, Horowitz will follow up with entrees on the FBI’s partisan activities in the 2016 presidential election and, later, another report on (if I may employ the term) collusion with the State Department.
As of this writing, it is unclear exactly what the scope of the inspector general’s inquiries will be.
Speaking for myself, I hope the dessert course includes a close look at the January 5, 2017 meeting at the White House meeting at which President Obama, Vice President Joe Biden, NSA director Susan “By the Book” Rice, and acting Attorney General Sally “Insubordinate” Yates were briefed by the country’s chief spooks—former FBI director James “Higher Loyalty” Comey, NSA chief Michael Rogers, CIA chief John “I Voted for Gus Hall” Brennan, and James Clapper, the former director of National Intelligence who delighted the television audiences everywhere when he instructed Congress that the Muslim Brotherhood was “a largely secular organization” that had “eschewed violence.” The country was in the very best of hands back then! What was the subject? Exactly what they were and were not going to tell the incoming administration about the ongoing investigation into possible Russian intervention in the 2016 presidential election? The “knotty question,” as Andrew McCarthy put it in a searing column on the event, was how to “engage” the incoming administration while also keeping them in the dark. Amazing.
But I digress. We’ll have to wait for Horowitz to serve up the additional courses he has cooking. But right now we can enjoy his refreshing treat of McCabe-kabob, grilled to perfection.
Andrew McCabe, you might recall, was a central player in the pseudo-investigation of Hillary Clinton’s misuse of classified information and self-enrichment schemes while Secretary of State. He was one of the people who made sure that went nowhere. He was also a central figure in the get-Mike-Flynn operation and, later, the Great Trump Hunt that has been occupying Robert Mueller for nearly a year.
McCabe leaked information about an investigation to a Wall Street Journal reporter, lied about leaking in casual conversations with superiors as well as under oath. Attorney General Jeff Sessions, digesting a preliminary report on McCabe’s conduct, fired him in March 2018 (not even a month ago, but it seems like forever).
The Left got its collective nappy in a twist over that, claiming that it somehow impeded Mueller’s boundless fishing expedition and also that it was callous to Andrew McCabe because he was fired just a day before he was entitled to his full pension. (He did not, by the way, “lose his pension” as some reported, merely a final escalator, and it is not even clear that that will survive litigation.)
For his part, McCabe took to the pages The Washington Post to deliver a weepy threnody of self-pity and attempted self-exoneration. It was an embarrassing performance. “I felt sick and disoriented,” he sniffed. He complained of President’s Trump’s “cruelty.” Just as the President had been a meany to James Comey, so he was to little Andy. “The president’s comments about me were equally hurtful and false, which shows that he has no idea how FBI people feel about their leaders.”
But the meat of McCabe apologia is contained in these few sentences:

I have been accused of “lack of candor.” That is not true. I did not knowingly mislead or lie to investigators. When asked about contacts with a reporter that were fully within my power to authorize as deputy director, and amid the chaos that surrounded me, I answered questions as completely and accurately as I could. And when I realized that some of my answers were not fully accurate or may have been misunderstood, I took the initiative to correct them.

As the recent Inspector General’s report shows, however, every claim in those sentences is a lie. To wit:

Allow me to translate the central phrase here: “lack of candor” is DOJ bureaucratese for “false statements, misrepresentations, the failure to be fully forthright, or the concealment or omission of a material fact/information,” i.e., lying.
Bottom line, partisan hack Andrew McCabe leaked information to the media about an ongoing investigation because he wanted to help Hillary Clinton and harm Donald Trump. He then lied repeatedly about his behavior both under oath and in unsworn conversation with superiors. He deserved to be fired by Jeff Sessions. I think he also deserves to be prosecuted. But since he is a Hillary partisan and Trump hater, I very much doubt he will be.
Still, reading Michael Horowitz’s meticulously researched report is a bracing experience. And who knows, perhaps Andrew McCabe was prudent to assemble a $500,000 GoFundMe legal defense fund. “It is not easy,” Jonathan Turley noted at The Hill, “to transform oneself from a once-powerful public official terminated for cause to the equivalent of a late-night, mud-splattered stray seeking shelter. However, McCabe had the media, which portrayed him as a noble civil servant viciously and unfairly targeted by Trump operatives.” Thanks to Michael Horowitz, however, we now know that, far from “noble.” Instead, he was a lying, partisan hack. What we’ll find out next, I predict, is that he was also part of the largest political scandal in U.S. history: a concerted effort by operatives in the Department of Justice, the FBI, and other intelligence agencies to influence the course of a presidential election and then, when that didn’t work, to sabotage the people’s choice.


This meal is far from over. But I suspect that Michael Horowitz will be filling out the menu at least as robustly as that fisher of men, Robert Mueller.
Posted by jtf at 9:17 AM

But the filmmakers are not alone in their endeavors. They are assisted greatly by a game cast who are all committed to their roles, even the young 'uns. John Krasinski is pulling double duty as director and paterfamilias in the cast, constantly trying to figure out how to protect his family from an unbeatable menace. Watch Movies Happy death day

Emily Blunt can do emotional intensity in her sleep and is particularly well cast here but it is newcomer Millicent Simmonds, as daughter Regan, that threatens to steal the show. Deaf in real life since infancy she brings a realism to the role that is difficult to imagine anybody else could have pulled. rampage film

If there is something to gripe about is that the evil that terrorizes the family can seem generic and not much is offered in the way of explanation as to their origin but this is nitpicking and in no way detracts from the experience. the devil's candy review

The movie is a master class in suspense, a taut thriller that tightens the tension to an almost unbearable degree all the way to its final scene. Hold off on the sodas, folks. You're not gonna want to take any bathrooms breaks for this one. watch Avengers Infinity War online free hd