A Q & A with prominent evangelical author Eric Metaxas 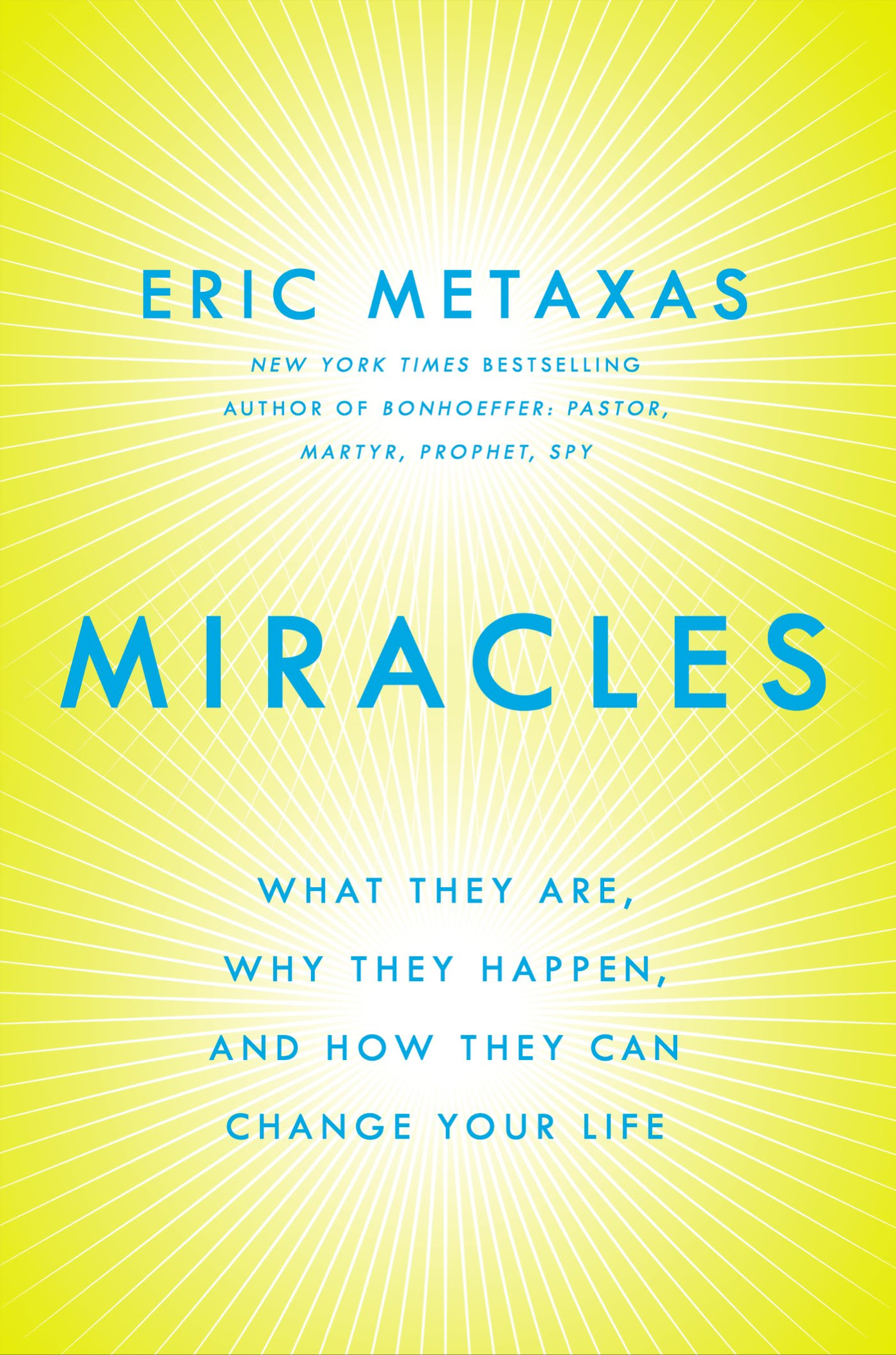 Despite living in an increasingly skeptical, secular society, most Americans believe miracles continue to occur today just as they were recorded to in ancient times. Still, in his recent book Miracles: What They Are, Why They Happen, and How They Can Change Your Life, prominent evangelical author Eric Metaxas tries to persuade readers to take a fuller look at miracles. He believes some of us need a more open mind, while others could use a more critical eye.


I asked Metaxas a few questions about his take on all things miraculous.

What is your definition of a miracle?

Webster’s Dictionary says, “an extra event manifesting divine intervention in human affairs.” I think that’s about right. David Hume, who talked a lot about miracles, said it’s “a transgression of a law of nature by a particular volition of the Deity, or by the interposition of some invisible agent.”
I concur with both, but what I really say is that a miracle is when something outside of the material, natural world of time and space comes into the material, natural world of time and space.

Do you write anything in this book that you think could convince skeptics that miracles happen?

First of all, I invite the skeptic to see what he thinks, because I don’t want to believe in any of this if it’s not true. So I say, “Look at these facts that we have. What do you make of these facts?” The second half of the book is stories, most of which are just tremendously interesting and amazing, and you have to ask yourself the question, “What do we make of these stories?” So, I invite skeptics into the reasoning process, and I say, “If I’m missing something, what am I missing?”
In the first half of the book, I similarly try to engage the mind so that people can reason their way through it, as opposed to simply dismissing it ideologically. I think people accept miracles ideologically and they can be gullible, they’re not thinking it through. But [also] I think people dismiss the miraculous ideologically without any evidence for dismissing it. It’s just something that they’ve decided that they want to do and they’re not really looking at it carefully. So, I really do want people to be as careful about how they think about the miraculous as we are when we talk about science or math.

Do you believe the universe is governed by natural laws? Can those laws be broken?

As you know, C.S. Lewis wrote a book on the same subject by the same title . . . was there something you hoped to do here that he didn’t?

To write a more readable book . . . . Look, nobody could ever compete with Lewis in the brilliance department — he’s practically my favorite writer, but his Miracles book is not the sort of thing I would give a friend. It’s hard to read, and he hasn’t approached it the way I have. He decided to take a very philosophical tack. I’ve taken a little bit more of a popular tack, because I want to invite the “average” reader. I say that the first half of my book is like C.S. Lewis-lite.

What do you think has changed between Lewis’ time and ours? Are there any new cultural conditions that you had to keep in mind that weren’t on his radar?

The most important thing is — and this is the great irony — for the first time in history, we have so much scientific information, more than we have ever had, that leads us to think there’s something beyond the world, or that the world itself was designed. You could not say that of the science in C.S. Lewis’ day.
To use the famous words of Fred Hoyle, the atheist scientist, he said the universe looks like a put-up job. It’s too neat. It’s too perfect. It couldn’t have just happened. It disturbed his atheism, because he said there’s too much information that we know. The more science learns, the more — ironically — it pushes us to this idea that there seems to have been an intelligence that created everything, because otherwise it couldn’t be just as it is.
In fact, I say that the greatest miracle ever, without a doubt, is the creation of the universe and the creation of a planet that can support life. It’s a mind-blowing miracle that makes the Red Sea look like a child’s joke. This is precisely what science has taught us. So, in a funny way, science comes close to proving the existence of God.

How big of an issue are miracles for Christianity?

Can you describe a miracle you’ve witnessed?

Part of what makes miracle stories compelling is context, so it’s very hard to give a quick answer. The most obvious are healings. I have this friend who had a stroke and was sure that on a particular day his leg would be healed, and that’s exactly what happened. But the details are what make the story just stunning. And then he went on to pray for a number of people who in turn have been healed from severe allergies and impossible-to-cure diseases.
For me, my conversion story is the most fundamental. I had this dream, and I tell the story in depth, but it’s just an extraordinary thing. My life was absolutely changed overnight, and the details of the dream are what just completely stunned me and changed everything literally overnight. And then the proof is in the pudding — my life changed dramatically. If you’re solving for “x,” how do you account for this change? Where does it come from?

How do you wrestle with miracles happening for some but not everyone?

That is absolutely one of the biggest questions — and I deal with that in the book. It’s complicated to answer, because that’s a huge question, but it has to be answered. If you can’t answer that, if you can’t deal with that, you have no business talking about miracles.
It’s a central question that everyone has, and I think maybe the answer would be that you end up talking about the nature of the God behind the miracles. Miracles are never just about miracles — they’re about the God behind the miracles. So you have to ask yourself the question, “What kind of a God would allow children to die of cancer, but would give me a parking space if I pray for it?” You have to actually think about that. Is this something that I can reconcile? At the end of the day, I do reconcile it. But it bears asking and it bears looking into in some depth.
Image courtesy of Shutterstock.
More on: atheist, C.S. Lewis, Christianity, Eric Metaxas, Jesus, miracles, Natural World, Red Sea, skeptic

Written byCorrie Mitchell
Posted by jtf at 5:45 AM