The Islamic State Is Here 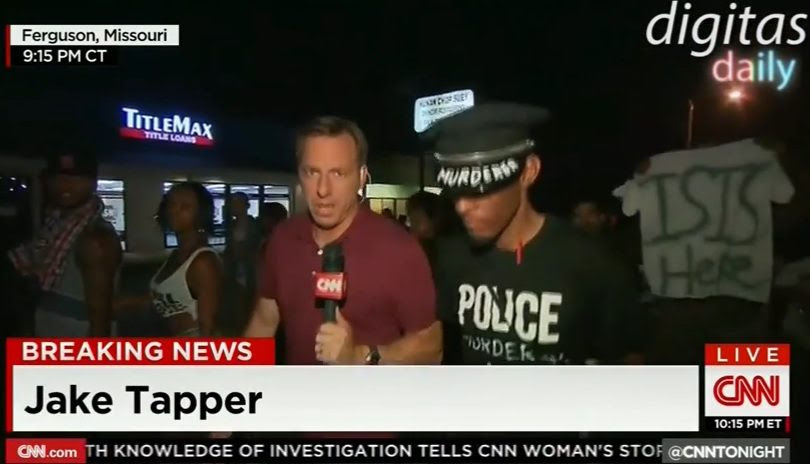 During the recent race riots in Ferguson, Missouri, CNN’s Jake Tapper was walking down a street and filming a segment when someone emerged out of the shadows behind him, holding a banner emblazoned, “ISIS is here.” At that point it was just a threat, or a boast, or both, but on Tuesday Rep. Duncan Hunter (R-CA) said that the Islamic State was doing all it could to make it a reality: “At least ten ISIS fighters have been caught coming across the Mexican border in Texas.”

“There’s nobody talking about it,” Hunter added. “If you really want to protect Americans from ISIS, you secure the southern border. It’s that simple…They caught them at the border, therefore we know that ISIS is coming across the border. If they catch five or ten of them then you know there’s going to be dozens more that did not get caught by the border patrol.”

Indeed. And jihadist exploitation of our southern border is nothing new. In June 2014, Rep. Ted Poe (R-TX) foreshadowed Hunter’s announcement when he said: “This jihadist group ISIS and its leader Abu Bakr al-Baghdadi have promised direct confrontation with America. He is looking forward to that day and he has said that publicly, we should believe him when he says that. These folks hate everything about the United States.” What’s more, “Of course the way they would come to the United States would be through the porous border with Mexico. The drug cartels will bring people into the country no matter who they are — for money. Everyone in the world knows that the border between the United States and Mexico is completely porous.”

Jihad terrorists and their enablers and accomplices have been entering the U.S. illegally by means of the Mexican border for many years. According to TheBlaze, “Hezbollah members and supporters have entered the U.S. through the southern border as early as 2002, with the case of Salim Boughader Mucharrafille, a Mexican of Lebanese descent. He was sentenced to 60 years in prison by Mexican authorities on charges of organized crime and immigrant smuggling. Mucharrafille had owned a cafe in the border city of Tijuana, near San Diego. In 2002, he was arrested for smuggling 200 people into the U.S., including Hezbollah supporters, according to a 2009 Congressional report.”

And in May 2010, the Department of Homeland Security warned local police along the southern border about a Muslim named Mohamed Ali who was suspected of being a member of the jihad terror group al Shabaab. An official who spoke to CNN about the warning said that it wasn’t clear whether or not Mohamed Ali was trying to enter the country illegally, but it seems unlikely that such an alert would have been sent out to police along the border if that had not been the case. Ali was, in any case, apparently involved in operating a “large-scale smuggling enterprise” that had brought hundreds of Somali Muslims into the U.S. illegally.

Top officials in Washington have known about how jihad terrorists have attempted to exploit the vulnerabilities of the southern border for many years now. In 2006, the House Homeland Security Investigations Subcommittee, under the leadership of Representative Michael McCaul (R-TX), issued a report entitled A Line in the Sand: Confronting the Threat at the Southwest Border, which stated: “Members of Hezbollah, the Lebanon-based terrorist organization, have already entered to the United States across our Southwest border.”

Murdock grants that these illegals may simply have come to pursue the American Dream, as Leftist dogma would have it. But he notes disturbing signs to the contrary: “Besides Iranian currency and Islamic prayer rugs, Texas Border Patrol agents discovered an Arabic clothing patch that reads ‘martyr’ and ‘way to immortality.’ Another shows a jet flying into a skyscraper.” And for some, their malign intentions were unmistakable: “The Department of Homeland Security issued an April 14, 2010 ‘Intelligence Alert’ regarding a possible border-crossing attempt by a Somali named Mohamed Ali. He is a suspected member of Al-Shabaab, a Somali-based al-Qaeda ally tied to the deadly attack on American GIs in 1993’s notorious ‘Blackhawk Down’ incident in Mogadishu.”
Murdock offered an update in an April 2013 article, in which he gave the numbers of people attempting to enter the U.S. illegally via Mexico from countries designated as state sponsors of terrorism.


As indicated by the latest information in Table 34 of Customs and Border Protection’s Immigration Yearbook 2011, 198 Sudanese were nabbed while penetrating the USA. Between FY 2002 and 2011, there were 1,207 such arrests. (These figures cover all U.S. borders, although, as Table 35 confirms, 96.3 percent of the overall detainee population intruded from Mexico.) Like other immigrants, most Sudanese seek better lives here. But some may be vectors for the same militant Islam that literally tore Sudan in two.In FY 2011, 108 Syrians were stopped at our borders; over ten years, the number is 1,353. Syria is a key supporter of Hezbollah, and Bashar Assad’s unstable regime reportedly has attacked its domestic opponents with chemical weapons.

As for Iranians, 276 were caught in FY 2011, while 2,310 were captured over the previous ten years. Iran also backs Hezbollah, hates “the Great Satan,” and craves atomic weapons.

The other ten “countries of interest” are Algeria, Iraq, Lebanon, Libya, Yemen, and:

Each passing year brings new stories of this kind, new investigations and new recommendations – but no real action to secure our southern border. And in July 2014, Breitbart News published what it described as “photos of what American security contractors on the ground believe is a Muslim prayer rug found near the border in Arizona last week.”

That same month, Texas rancher Mike Vickers found an Urdu-English Dictionary on his property, which runs along the border and is frequently trespassed upon by illegals. Urdu is, of course, the language of Pakistan, an Islamic Republic that has produced a healthy number of jihad terrorists. A Texas Border Patrol Agent noted: “We’ve found Korans, prayer rugs and many other unusual items at the border that certainly raise concern.”

All these warnings, all this information, and yet year after year, nothing is done. And as long as Barack Obama is President and the Democrats are the majority party, nothing will be done – except the repetition of the charge that concern about border security is “racist.” If the Islamic State manages to get jihadis into the country from Mexico and they succeed in mounting a large-scale attack, our leaders can console themselves amid the carnage that at least they were never “racist.”