Music Review: The War on Drugs - Lost in the Dream 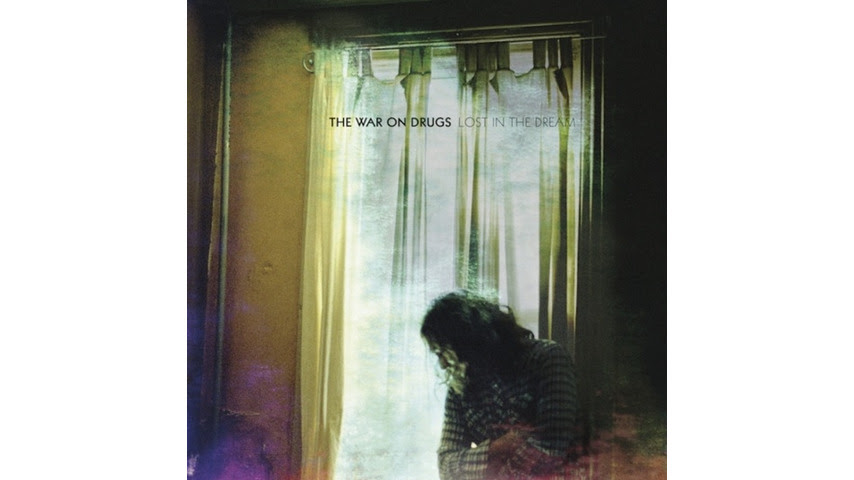 I wasn’t sure I needed an album like Lost in the Dream until I heard it. Even then, it took a few listens before I could articulate why it scans the way it does: Wistful but not resigned, invigorated but not wide-awake. As its title suggests, Lost in the Dream often trades in gaseous, impressionistic hues, and a cavalry of affected guitar, synth, lap steel, sax, harmonica and piano tracks gel into luminescent aural sunsets at several points throughout the album. These ambient drifts bookend Adam Granduciel’s tender songs, the lyrics of which also tend to reveal themselves in refracted ways. Indeed, it can be difficult to discern more than a handful of lines in succession—Granduciel’s feathery, mostly reserved delivery sees to this, as well as the tonnage of reverb baked into the mix—but listeners can’t miss the sense of melancholy and anxiety woven into nearly every second of Lost’s hour-plus run-time. “Am I alone here, living in darkness?” he asks on “Eyes to the Wind,” his questioning telling all in a handful of words.
This sense of need derives from a predicament in which I find myself in 2014, when it’s easier to discover, say, an adventurous R&B artist than a new band of trad-rockers with anything interesting to say, musically or otherwise. Rock isn’t dead, of course. But, at least as far as “indie” is concerned, the landscape has shifted so far in the last two decades that it almost seems like an act of rebellion to hit the stage with only two six-strings, a bass and a drum kit. I suspect that’s due as much to technological innovation as to the discomforting fact that rockers may be running out of ways to be interesting, which might partly explain why indie bands in particular seem so infatuated with the past at this juncture. But The War on Drugs give me hope that the genre isn’t completely picked over, that perhaps the answer doesn’t so much lie in re-treading the past as it does in looking outside rock music entirely for inspiration.
Don’t get me wrong: Only a creature from another planet would miss the iconic rock/pop touchstones which inform much of Lost in the Dream. Nods to heartland troubadours Neil Young, Tom Petty and Bruce Springsteen abound, as do faithful takes on Britpop and Americana. But it’s to Granduciel’s credit that the touchstones are minor points in a much vaster narrative that also seems to include left-field inspirations like drone music. (Whether this was intentional or not is beside the point.) And there’s no mistaking that the 34-year-old’s own hard-won vision carries more weight in his work than any aging rocker or laptop wiz-kid’s influence could ever hope to. Lost in the Dream pushes rock music forward—it isn’t the mirror of supposed better times that lesser bands make because they can’t or don’t want to locate their own voice.
The first song most of us heard from Lost was “Red Eyes,” a galloping, wide-eyed romper that somehow manages to float even as it surges forward. This is a tactic Granduciel uses often and effectively, letting the drums and acoustic guitars provide a consistent spine so that he can push and pull the watery, tremolo’d leads, sax, synth and other ambient flourishes with a nuanced grace. It’s all very beautiful, enamoring stuff until the songwriter dispenses with the niceties and throttles everything in the mix to near-peaking levels, as he does toward the end of both “Red Eyes” and its companion “Burning,” which Granduciel himself recently (and rightfully) compared to Rod Stewart’s 1981 hit “Young Turks.” “An Ocean in Between the Waves” is Lost’s other stampede, building incessantly for seven minutes to an abrupt and powerful stop.
The rest of Lost proceeds at a slower clip, oscillating between a sort of drip-drip tenderness (“Suffering”), comforting alt-country (“Eyes to the Wind” and “Lost in the Dream”), and, in a singular turn for the album, a kind of vibe-y, delay-heavy hypnosis (“Disappearing”). (There’s also the meditative instrumental “The Haunting Idle,” which seemed unnecessary until I realized how perfectly it sets up the explosion of “Burning.”) Of these modes, I’m most seduced by the mid-section of “Suffering,” which is one of the most romantic pieces of rock music I’ve heard in years. Granduciel and band drift gently between C and F chords before ambling down to A, a reminder of how one subtle, elegant shift is worth a thousand superfluous runs. He asks, “Will you be here, suffering?” less as a passive-aggressive barb than a tired plea for empathy, the music suggesting neither anger nor supplication. Many times Granduciel is more spirited on Lost, but the M.O. of “Suffering” seems, to me at least, to speak volumes about the powerful undercurrent running throughout the collection. He’s known pain in his time, but losing hope doesn’t appear to be an option. He’s “just a burning man, tryin’ to keep the ship from turning over, again.”

Review: 'Lost in the Dream' by The War on Drugs

The War On Drugs Photo by Dusdin Condren

Adam Granduciel, the man behind the War on Drugs, has been recording trance-inducing Americana since 2005, and along with his long-time friend and former bandmate Kurt Vile, created a whole new style of folk-based rock reverie doused in an ocean of synthesizers. Lost in the Dream is the band’s third full-length and continues to develop the Tom Petty-meets-Sonic Youth sound they pioneered. On all of the band’s previous releases, Granduciel would build the core of the songs himself, playing most of the instruments and endlessly tinkering with the mixes until they’d reached an adequate level of perfection. He’s had various musicians play on previous albums but with Lost in the Dream Granduciel decided to change things up. He recorded the core of these songs with two collaborators, longtime bass player Dave Hartley and pianist Robbie Bennett.
The inclusion of Hartley and Bennett is immediately evident. While Granduciel has always used piano in his songs to some extant, his use was relegated to a few chords that accentuated the songs. Many of the songs here feature Robbie Bennett’s piano work prominently and these arrangements are much more involved than on previous the War on Drugs incarnations. The foregrounded piano on “Under the Pressure”, “Red Eyes”, and “Eyes to the Wind” proves a perfect compliment to the lyrical and vocal maturity on display here. Although it remains effects laden, Granduciel’s voice is more expressive than ever as well. That passion burns bright through the driving “Red Eyes” as well as the gentle “Suffering”. Whereas, Granduciel is no stranger to ballads, “Suffering” is perhaps his most affecting song to date. In the past, Granduciel’s lyrics were often metaphor-laden (“Arms Like Boulders” and “Needle in Your Eye #16”), but the lyrics on Lost in the Dream continue to relate on a more personal level, much in the same way Slave Ambient‘s “Brothers” did. When he sings, “Will you be here suffering?” you can feel it in the pit of your stomach. It aches with sadness and the humanity displayed works to the album’s advantage. Often the most personal feelings are also the most universal.
Lost in the Dream is the next logical evolutionary step in the War on Drugs’ sound, taking classic rock and recreating it in Granduciel’s image. The album continues his love affair with synthesizers, but also sees him expanding his sonic palette. “Under the Pressure” and “Red Eyes” approach ‘80s new wave in keyboard sounds, while “Burning” uses Born in the USA-style synthesizers to dreamier effect. Granduciel had flirted with some of these sounds on 2011’s Slave Ambient, but their prominence on Lost in the Dream defines the record’s sound. Granduciel’s songwriting has always been pretty straightforward in a classic rock sense, but his arrangements have always been complex and here they continue to grow in size and scope. Guitar sounds and hazy murmurs float in and out of focus over a glowing atmosphere of synthesizers, approximating the actual sound of dreams as much as a band like My Bloody Valentine. What’s amazing about Granduciel’s songwriting is that even as he approaches and crosses the ethereal plane, his songs can still be anthems in the same way Bruce Springsteen, Tom Petty, and Bob Dylan songs can be anthems.
The song lengths here stretch out further than on previous releases with only “The Haunting Idle” hovering around the three-minute mark. Despite these long lengths, the songs never meander or feel too long. Instead they glide forward triumphantly, lingering longer on moments of beauty rather than ending prematurely. The album’s centerpiece is the triumphant “Eyes to the Wind”, a song that lifts your spirits until they’re absolutely soaring. It’s an anthem that even beats out Wagonwheel Blues opener “Arms Like Boulders” for the best song Granduciel has ever written. The song reaches “Thunder Road”-esque grandeur and, if it doesn’t get your adrenaline pumping, then you better check your pulse and make sure you aren’t dead. The album tends to bask in its own magnificence and rightly so. Final track “In Reverse” takes its time getting started, having more than earned the right to do so.
Lost in the Dream is an elegant, triumphant album and perhaps the pinnacle of the ambient Americana sound Granduciel and Kurt Vile invented with Wagonwheel Blues and Vile’s Constant Hitmaker, respectively. It’s an alternate universe in which ‘80s Bruce Springsteen began using synthesizers to approximate dream states for anthems like “Born in the USA” and “Dancing in the Dark” instead of using them in service of pop melodies. Wagonwheel Blues took the indie world by storm with its re-appropriation of classic rock while the increased fidelity of Slave Ambient grew brighter and bigger on top of Wagonwheel‘s foundations. Those albums were great, but Lost in the Dream is not only a growth, but a perfection of that sound. With their third album, the War on Drugs continue to recreate classic rock in their own image and in doing so they created a classic album of their own.
Rating:

Email ThisBlogThis!Share to TwitterShare to FacebookShare to Pinterest
Labels: The War on Drugs