In his final act at Yankee Stadium, Mr. November brought October to September

NEW YORK -- Derek Jeter was falling apart as he wagged that black Louisville Slugger in the Yankee Stadium batter's box one last time, man on second, score tied, bottom of the ninth. He had spent the night in a state of utter chaos, his heart pounding and his face contorting this way and that as he fought off the emotion like he would a fastball in on his hands.
Only Jeter was losing this battle, and badly. He wanted to weep one minute, then reprimand himself the next. The man who always led the league in shrinking the biggest moments to a manageable size was being swallowed whole by the magnitude of his own goodbye, and yet the fans were standing and chanting and demanding that he deliver one more memory for the road.
"Please don't hit it to me," Jeter kept telling himself in the field. He'd run into the clubhouse bathroom during this game with the Baltimore Orioles to cry like he had as a homesick teenager in Tampa, Florida, in 1992, praying that his parents would take his sorry, bonus-baby self back to Kalamazoo, Michigan, and save him from wasting any more of the New York Yankees' cash.
[+] Enlarge 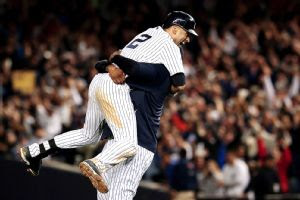 Elsa/Getty ImagesThe Captain capped his career in the Bronx with a ninth-inning, walk-off single in the Yankees' 6-5 win.
Jeter nearly cried as he drove himself to the ballpark. Before the game, with all Yankees gathered around, CC Sabathia presented Jeter with a watch and a blown-up portrait of The New Yorker magazine cover of Jeter tipping his cap, and The Captain quickly turned away from the gestures to hide his tears.
The whole day and night was a grueling struggle for control for an athlete who has always wanted to maintain control as much as he's wanted to breathe.
"I really thought I was going to break down," Jeter would concede. He said he'd spent two decades successfully trying to "trick myself" into ignoring the nerves or fatigue or pain he was feeling, but on Thursday night he realized he was completely overmatched in that pursuit.
The RBI double off the top of the left-center wall in the first inning and the broken-bat grounder with the bases loaded in the seventh -- a grounder Orioles shortstop J.J. Hardy threw away to allow two runs to score -- amounted to a satisfying farewell. Jeter was content to take those contributions to a 5-2 victory to the bank and then head for whatever is waiting for him at Fenway Park.
Only then, without warning, David Robertson started a game of home run derby in the top of the ninth, quieting those "Thank you, Derek" chants that had the quivering shortstop all but ready to pass out. Robertson's turned out to be the greatest blown save in Yankees history.
By the time it was Jeter's turn to bat, Brett Gardner had bunted pinch runner Antoan Richardson over to second. Everyone in the house knew Buck Showalter, Jeter's first manager in New York, wouldn't dare make the smart move and walk Jeter to set up the double play. Showalter would ask Evan Meek to pitch to the sixth-most prolific hitter of all time, the guy wagging that familiar P72.
Now batting for the Yankees, came Bob Sheppard's voice of God for the last time, numbah two, Derek Jeter. Numbah two.
And on big league hit No. 3,463, Jeter lashed at the first pitch (for what seems like the 2,237th time) and sent a hard single to right field (for what seems like the 2,237th time). Jeter pumped his arms high after he rounded first, and his teammates mobbed him for winning the first home game he'd ever played with his Yankees already eliminated from the playoff race.

As Derek Jeter plays his final season in pinstripes, ESPNNewYork.com looks back at the Captain's legacy.
Derek Jeter's career in photos

Suddenly, Joe Torre and Mariano and Andy and Jorge were out on the field, along with Bernie and Tino, too. Jeter hugged them all before waving his cap to the fans.
He'd walk out to shortstop, crouch down and bow his head to whisper his pregame prayer of thanks. He jogged over to his mother and father and sister in the stands. Before he wished a successful postseason journey for the Orioles -- all of them glued to the dugout rail -- Jeter said in his on-field YES Network interview that he spent the night throwing away balls, forgetting his elbow guard and giving signs to his double-play partner, Stephen Drew, when no Orioles were even on base.
He did another walk around the field to Sinatra's "My Way," repeatedly wiping his face with a towel. Jeter placed his cap against his heart and mouthed a "Thank you" to the crowd, and at 10:33 p.m. he embraced Torre near the dugout tunnel and then disappeared.
"I don't know how I played this game," Jeter had told the fans.
The Iceman melteth. On a night when biblical rain was supposed to wash this Jeter-palooza out to sea, The Captain's tears were the only drops in sight.
"You almost feel as if you're watching your own funeral," he said of his extended victory lap.
But Thursday night was more a fairy tale than a funeral. Jeter's near homer-turned-rousing RBI double in the first left witnesses wondering if this could turn out to be the kind of performance he delivered the day he reached 3,000 hits, a 5-for-5 day against the Tampa Bay Rays that included a soaring shot off David Price to hit the magic number.
Jeter had his share of big moments against Baltimore in the Bronx, after all: the Jeffrey Maier homer in 1996; the breaking of Lou Gehrig's franchise record for hits in 2009. This time around, Showalter's presence added another this-is-your-life element to the event.

As Derek Jeter plays out his final season in Yankee pinstripes, ESPNNewYork.com will be there every step of the way.
The Jeet Index

Cap Map »
Showalter was just in his first year running the Yankees in 1992 when they drafted Jeter, a kid the manager described as "170 pounds soaking wet." Showalter was the one who promoted Jeter to the majors in 1995, the one who decided he was worthy of wearing a single-digit jersey. "You'd better be right about this," George Steinbrenner told him.
The manager was as right as he's ever been.
"I know there's a lot of people that have much more talent than I do, throughout the course of my career," Jeter said. "But I can honestly say I don't think anyone played harder ... I did it here in New York, which I think is much more difficult to do."
With his New York career complete, Jeter said he is done playing shortstop, that he wanted to keep the view and store it away for keeps. He will assume the role of designated hitter in Boston because it's the right thing to do for the rivalry and the fans.
Jeter plays. That's what he does. Had Joe Girardi removed Jeter from the top of the ninth the way he had Jeter and Pettitte remove Rivera last year, The Captain never would've batted in the bottom of the ninth, never would've followed up Robertson's meltdown with the perfect ending to his near-perfect Bronx tale.
"It's above and beyond anything I've ever dreamt of," Jeter said of the job.
"I couldn't have believed it myself," he said of the winning hit.
In the end, Derek Jeter turned a meaningless game into something that felt like a Game 7. Mr. November brought a piece of October to the back end of September, and it was one hell of a way to go out.

ESPNNewYork.com columnist
Ian O'Connor has won numerous national awards as a sports columnist and is the author of three books, including the bestseller, "The Captain: The Journey of Derek Jeter." ESPN Radio broadcasts "The Ian O'Connor Show" every Sunday from 7 to 9 a.m. ET. Follow Ian on Twitter »
Posted by jtf at 5:25 AM