An ISIS Nest Grows in Boston 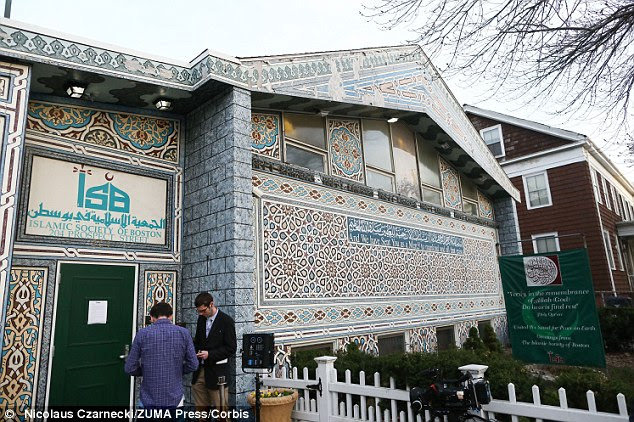 Boston’s WCVB.com reported Monday that “the federal government is targeting Boston and two other American cities to shut down what they are calling the U.S.-Jihad pipeline to ISIS in an attempt to stop Americans from joining the terrorist organization.” Boston apparently made this elite list because Ahmad Abousamra, “an American college graduate from Boston, who has been on the run from the FBI for years, is suspected of joining ISIS and leveraging his computer skills to spread the Iraqi terror group’s propaganda on social media.” And so now Boston is reaping what it has sown for so many years.

Former Boston Mayor Thomas Menino really, really wanted the Islamic Society of Boston to be well situated in the city. He gave the ISB an astonishing sweetheart deal on the land for the mosque. Menino, according to a 2008 Boston Phoenix exposé, “in a fit of multicultural ecumenicalism, approved the sale of city-owned land to the mosque for the bargain basement — and still controversial — price of $175,000, plus the promise of in-kind services, including upkeep of nearby parks. The predictable uproar that arose in the wake of not only selling land well below market rates, but also selling it to a religious institution in contravention of the supposed separation of church and state, was supposed to be muffled by making the complex available for community use. But oops — that never happened. The promised community facilities for non-congregant use still have not been built.”

Not only that, but although it was “originally intended to minister to an urban congregation of African-American Muslims, the mosque project was turned over by the city, with no fanfare and little notice, to the control of suburban-based Muslims of largely Saudi Arabian heritage: the Islamic Society of Boston (ISB), which more recently became the Muslim American Society of Boston (MAS-Boston). Perhaps the city believed, incorrectly, that one Muslim community could easily step in for another. In fact, the two groups are quite different.”

The Muslim American Society is the principal name under which the Muslim Brotherhood operates in the United States. According to a captured internal Muslim Brotherhood document, the Brotherhood’s “work in America is a kind of grand Jihad in eliminating and destroying the Western civilization from within and ‘sabotaging’ its miserable house by their hands and the hands of the believers so that it is eliminated and Allah’s religion is made victorious over all other religions.”
So Menino was instrumental in the construction of a Muslim Brotherhood mosque in Boston, which the Tsarnaevs attended. Were it not for Menino and so many others like him all over the country behaving as if Muslim Brotherhood ties were a matter of no consequence, it would perhaps not be so culturally unacceptable in America today to oppose jihad terror.

It has been so unacceptable for so long, however, that the Islamic Society of Boston mosque that the Tsarnaevs attended was never investigated, despite the fact that they were not the only jihad terrorists to frequent it. Aafia Siddiqui, a.k.a. “Lady al-Qaeda,” who was convicted of trying to murder American soldiers and may also have been plotting a jihad terror attack against an American city, was also a member, as was convicted jihad terror plotter Tarek Mehanna and Abousamra. The renowned Muslim Brotherhood sheikh, Yusuf al-Qaradawi, who has praised Hitler and called upon Muslims to finish his job of killing Jews, was a trustee of the Islamic Society of Boston and has addressed the mosque congregation during fundraisers. Another imam who has addressed the Boston congregation, Yasir Qadhi, has called for the replacement of the U.S. Constitution with Islamic law and said that the “life and prosperity” of Christians “holds no value in the state of Jihad.”

On June 12, 2013, as the scandal of the Obama Administration’s massive surveillance of law-abiding Americans was breaking, it was revealed that while the National Security Agency was listening to every phone call and reading every email, there was one place where people could be safe from surveillance: inside a mosque. Investor’s Business Daily reported that “the government’s sweeping surveillance of our most private communications excludes the jihad factories where homegrown terrorists are radicalized.

Since October 2011, mosques have been off-limits to FBI agents. No more surveillance or undercover string operations without high-level approval from a special oversight body at the Justice Department dubbed the Sensitive Operations Review Committee.”

This panel “was set up under pressure from Islamist groups who complained about FBI stings at mosques. Just months before the panel’s formation, the Council on American-Islamic Relations teamed up with the ACLU to sue the FBI for allegedly violating the civil rights of Muslims in Los Angeles by hiring an undercover agent to infiltrate and monitor mosques there.”

And specifically: “The FBI never canvassed Boston mosques until four days after the April 15 attacks, and it did not check out the radical Boston mosque where the Muslim bombers worshipped.”

The FBI never canvassed Boston mosques until four days after the April 15th attacks. If the Russians tell you that someone has been radicalized and you go check and see the mosques that they went to, then you get the articles of incorporation as I have for the group that created the Boston mosque where these Tsarnaevs attended, and you find out the name Alamoudi – which you’ll remember because while you were FBI director, this man who was so helpful to the Clinton administration with so many big things, he gets arrested at Dulles Airport by the FBI and he’s now doing over twenty years for supporting terrorism. This is the guy that started the mosque were your Tsarnaevs were attending, and you didn’t even bother to go check about the mosque? And then when you have the pictures, why did no one go to the mosque and say, “Who are these guys? They may attend here.” Why was that not done, since such a thorough job was done?

Mueller initially disputed this, saying, “Your facts are not altogether well –” In a heated exchange, Gohmert shot back: “Sir, if you’re going to call me a liar, you need to point out specifically where the facts are wrong.”

Mueller responded: “We went to the mosque. Prior to Boston,” he said vehemently. “Prior to Boston happening, we were in that mosque talking to imams several months beforehand as part of our outreach efforts.”

Gohmert then asked: “Were you aware that those mosques were started by Alamoudi?”

Not satisfied with this, Gohmert pressed: “You didn’t answer the question, were you aware that it was started by Alamoudi.” Mueller then admitted that he had not been.

Meanwhile, Boston refused to run our AFDI pro-freedom ads (we are suing on free speech grounds, of course). In nearby Worcester, Roman Catholic Bishop Robert McManus canceled my scheduled talk on Muslim persecution of Christians because, he said, it would harm the wonderful dialogue that local Catholics were having with Boston-area Muslims. He did this at the behest of a local Muslim leader who openly professed his support for convicted jihadist Mehanna.

And so now Boston is a hub for Islamic State recruitment. How is all that “outreach” working out?

URL to article: http://www.frontpagemag.com/2014/robert-spencer/an-isis-nest-grows-in-boston/
Posted by jtf at 6:07 AM