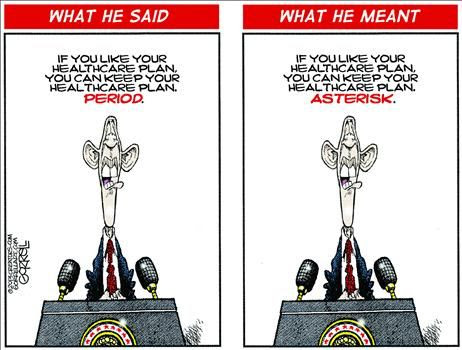 Every disaster has its moment of clarity. Physicist Richard Feynman dunks an O-ring into ice water and everyone understands instantly why the shuttle Challenger exploded. This week, the Obamacare O-ring froze for all the world to see: Hundreds of thousands of cancellation letters went out to people who had been assured a dozen times by the president that “If you like your health-care plan, you’ll be able to keep your health-care plan. Period.”
The cancellations lay bare three pillars of Obamacare: (a) mendacity, (b) paternalism and (c) subterfuge.


(a) Those letters are irrefutable evidence that President Obama’s repeated you-keep-your-coverage claim was false. Why were they sent out? Because Obamacare renders illegal (with exceedingly narrow “grandfathered” exceptions) the continuation of any insurance plan deemed by Washington regulators not to meet their arbitrary standards for adequacy. Example: No maternity care? You are terminated.
So a law designed to cover the uninsured is now throwing far more people off their insurance than it can possibly be signing up on the nonfunctioning insurance exchanges. Indeed, most of the 19 million people with individual insurance will have to find new and likely more expensive coverage. And that doesn’t even include the additional millions who are sure to lose their employer-provided coverage. That’s a lot of people. That’s a pretty big lie.
But perhaps Obama didn’t know. Maybe the bystander president was as surprised by this as he claims to have been by the IRS scandal, the Associated Press and James Rosen phone logs, the failure of the Obamacare Web site, the premeditation of the Benghazi attacks, the tapping of Angela Merkel’s phone — i.e., the workings of the federal government of which he is the nominal head.
I’m skeptical. It’s not as if the Obamacare plan-dropping is an obscure regulation. It’s at the heart of Obama’s idea of federally regulated and standardized national health insurance.
Still, how could he imagine getting away with a claim sure to be exposed as factually false?
The same way he maintained for two weeks that false narrative about Benghazi. He figured he’d get away with it.
And he did. Simple formula: Delay, stonewall and wait for a supine and protective press to turn spectacularly incurious.
Look at how the New York Times covered his “keep your plan” whopper — buried on page 17 with a headline calling the cancellations a “prime target.” As if this is a partisan issue and not a brazen falsehood clear to any outside observer — say, The Post’s fact-checker Glenn Kessler, who gave the president’s claim four Pinocchios. Noses don’t come any longer.
(b) Beyond mendacity, there is liberal paternalism, of which these forced cancellations are a classic case. We canceled your plan, explained presidential spokesman Jay Carney, because it was substandard. We have a better idea.
Translation: Sure, you freely chose the policy, paid for the policy, renewed the policy, liked the policy. But you’re too primitive to know what you need. We do. Your policy is hereby canceled.
Because what you really need is what our experts have determined must be in every plan. So a couple in their 60s must buy maternity care. A teetotaler must buy substance abuse treatment. And a healthy 28-year-old with perfectly appropriate catastrophic insurance must pay for bells and whistles for which he has no use.
It’s Halloween. There is a knock at your door. You hear: “We’re the government and we’re here to help.”
You hide.
(c) As for subterfuge, these required bells and whistles aren’t just there to festoon the health-care Christmas tree with voter-pleasing freebies. The planners knew all along that if you force insurance buyers to overpay for stuff they don’t need, that money can subsidize other people.
Obamacare is the largest transfer of wealth in recent American history. But you can’t say that openly lest you lose elections. So you do it by subterfuge: hidden taxes, penalties, mandates and coverage requirements that yield a surplus of overpayments.
So that your president can promise to cover 30 million uninsured without costing the government a dime. Which from the beginning was the biggest falsehood of them all. And yet the free lunch is the essence of modern liberalism. Free mammograms, free preventative care, free contraceptives for Sandra Fluke. Come and get it.
And then when you find your policy canceled, your premium raised and your deductible outrageously increased, you’ve learned the real meaning of “free” in the liberal lexicon: something paid for by your neighbor — best, by subterfuge.
Read more from Charles Krauthammer’s archive, follow him on Twitter or subscribe to his updates on Facebook.