Book review: ‘Days of Fire: Bush and Cheney in the White House’ by Peter Baker 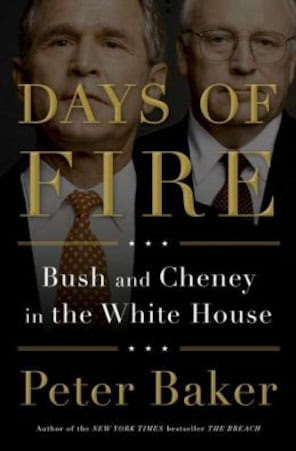 James Mann, a resident fellow at the Johns Hopkins School of Advanced International Studies, is the author of “Rise of the Vulcans: The History of Bush’s War Cabinet.” He is working on a biography of George W. Bush for the American Presidents series.

We are in the midst of a wave of revisionism about George W. Bush and his administration.

For years, amid the rancor of the Iraq war, Bush was often portrayed as a simple idiot or sometimes as a demonic manipulator. More recently, amid an outpouring of coverage prompted by the April openingof the George W. Bush Presidential Library in Dallas, we have been treated to even thinner caricatures of W.: Bush the humanist, a contemplative painter who was misunderstood at the time and did little to inspire the passions that engulfed him.

This recent rethinking will prove no more enduring than the original perceptions. The historical judgments of the Bush administration are only beginning to take shape. It has taken several years for the key actors to write their memoirs and for the president’s friends and subordinates to offer stories they wouldn’t volunteer at the time the Bush team was in the White House.

Peter Baker’s impressive new book, “Days of Fire,” one of the first efforts to set out the history of the Bush administration, is a distinguished work, notable for its scope and ambition, that should become a standard reference for historians. After tracing the upbringing and early careers of both Bush and his vice president, Dick Cheney, Baker chronicles their time in office from start to finish, encompassing their foreign and domestic policies. (The book’s title is a play on a quote from Bush’s second inaugural address: Referring to Sept. 11, 2001, the president said, “And then there came a day of fire.”)

The book has few groundbreaking revelations or startling judgments. Its virtue lies in the mass of information Baker has collected and the way he has pulled it together, so that the jumble of material on the Bush years is consolidated in one smooth narrative. He has read the memoirs so you don’t have to. From them he unearths gems, such as Bush’s quip about the icy reception he would get when addressing the United Nations General Assembly: “It’s like speaking to the wax museum. Nobody moves.” (This comes from former spokesman Ari Fleischer’s memoir.)

Baker also gathers a wealth of other revealing quotes and anecdotes, not previously published, from interviews and from private notes of White House meetings. “Write this down,” Bush told Republican governors in the fall of 2002. “Afghanistan and Iraq will lead that part of the world toward democracy.”

The heart of “Days of Fire” lies in the changing relationship between Bush and Cheney — how Bush in the early years of his administration relied heavily on his vastly more experienced vice president, but during his second term he increasingly operated on his own, relegating Cheney to the margins. Baker draws out each development in this tangled relationship in much the same way that Robert Caro wrote about the relationship between John F. Kennedy and Lyndon Johnson.

In this, Baker sometimes succeeds, yet his approach has some flaws, too. The book is overwhelmingly event-driven and chronological. On occasion, it reads too much like a tick-tock of Bush’s eight years in office, dwelling on time and detail until it becomes eye-numbing: When Bush has a routine colonoscopy in 2002 and transfers power to Cheney for a couple of hours, Baker informs the reader that the White House physician “performed the procedure, finishing at 7:29 a.m. without finding any polyps. Bush awoke at 7:31, got up soon thereafter, ate a waffle and played with his dogs.” This is simply too much information.

The book dwells more on the personalities in the Bush administration than on the ideas and larger forces at work. Baker depicts the relationship between Cheney and Secretary of State Colin Powell as an old friendship turned sour; Powell had been Cheney’s “once-trusted sidekick during the first Bush presidency,” he writes. This is doubly off-kilter: Powell, both as a former national security adviser to President Ronald Reagan and as the most powerful chairman of the Joint Chiefs of Staff the nation had ever known, was anything but Cheney’s sidekick; his stature and influence in George H.W. Bush’s White House engendered considerable mistrust on the part of Cheney and top civilian aides such as Paul Wolfowitz and Scooter Libby. At the root of this mistrust was the fact that Cheney and Powell represented different ideas about America’s post-Cold War role in the world.

When the two men returned to office under George W. Bush, they brought with them these distinct worldviews. In addition, each man (particularly Cheney) installed a network of allies and supporters who reflected his beliefs. Amid these larger conflicts, the personal relationship between Cheney and Powell was almost irrelevant; it was bound to be strained.

Baker’s careful reconstruction gives readers a good sense of the day-to-day flow of the Bush administration. He describes the events as the White House saw them — switching often, in short order, from one subject to another, with Baker drawing the connection that “even as” one thing was happening, another was. “The economic crisis began to worsen dramatically the day after [Adm. William J.] Fallon’s resignation,” he writes in one typical passage, leaving time as the sole connector between unrelated events.

“Days of Fire” makes far too little effort to separate the wheat from the chaff. Events of historic consequence, such as the Bush tax cuts, are given comparable treatment with White House staff feuds and minor personnel changes that had little significance at the time and none at all by now. Why should we care about the conflicts between, say, political strategists Matthew Dowd and Karl Rove, or between press secretary Dana Perino and one of her predecessors, Scott McClellan? Such material distracts from the important story Baker has to tell about the administration’s leading actors and about events including the Iraq war.

The final verdict on the Bush administration, of course, remains to be written. After nearly five years of the Obama administration, some of Bush’s counterterrorism policies — the detention facility at Guantanamo Bay, Cuba, for example — have proved more lasting than they seemed when he left office. It will take years, perhaps decades, to judge what Bush’s tax cuts did to America’s economic and social structure. Over time, we will be able to see just how badly the war in Iraq eroded American power and damaged its international standing.

“Days of Fire” doesn’t try to make these larger assessments. It is, however, as thorough and detailed an account of the Bush years — day by day, week by week — as we are ever likely to get.